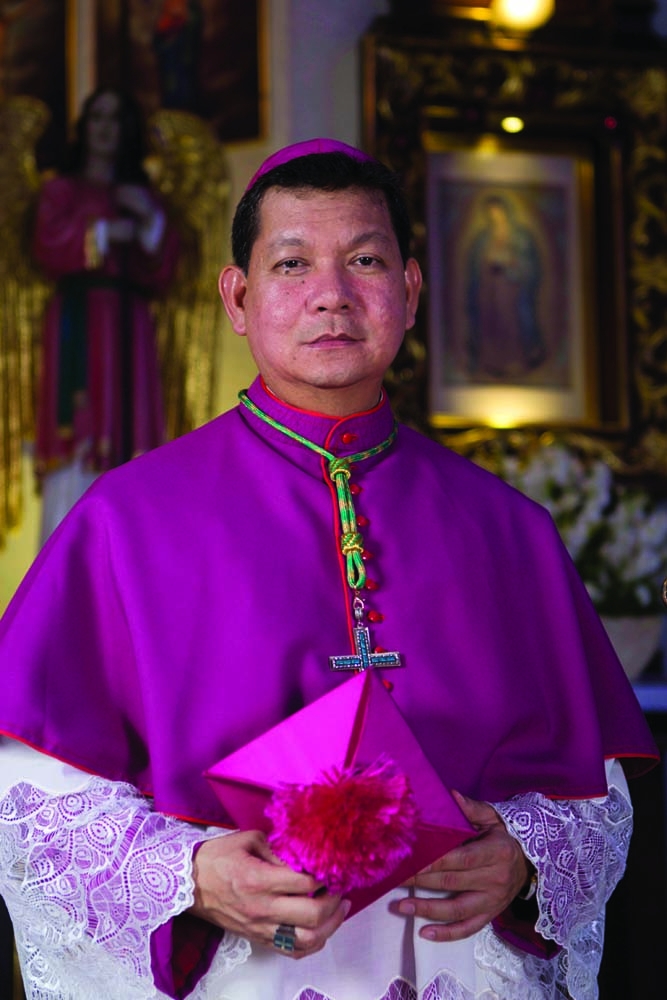 CEBU CITY – The University of San Jose-Recoletos had its first alumnus formally elevated to the rank of a bishop in the Catholic Church on August 10, 2015, further extending the reach of Recollect education well into the crucial administrative position of the Archdiocese of Cebu.

“Msgr. Dennis has served me faithfully during my years of service in Cebu,” Cardinal Vidal said of his former personal secretary in his homily. “He is an eloquent writer and trustworthy companion in the apostolate.”

Bishop Villarojo, 48, graduated high school salutatorian from CSJ-R in 1984. He was one of the most decorated students of his batch, excelling both in academics and in extra-curricular activities.

He is the first Josenian alumnus to be elevated to the rank of bishops in the Roman Catholic Church. He is assigned as auxiliary bishop of Cebu, along with Bishop-elect Oscar Florencio of the Archdiocese of Palo.

In his speech immediately after the ordination, Bishop Villarojo thanked the people who have helped him one way or another in his “48-year journey” to the episcopate.

He singled out his teachers, batchmates and friends at CSJ-R who had helped mold his early leadership skills and religiosity. He graduated high school salutatorian in 1984.

“He was humble and meek, serious and intelligent,” Engr. Exaltacion said of his fellow officer in the Citizen’s Army Training during their senior year at CSJ-R.

“He was also charismatic and had a very unique sense of humor. But he’s a very good-natured person,” the TTSPI president added.

He revealed that the bishop also attracted admirers from the opposite sex, with his mixture of good looks and intelligence. But he maintained that he hadn’t heard rumors linking the bishop to any of their schoolmates.

“I could tell that he was crush ng bayan,” the engineer said. “He’s basically captivating to the opposite sex. But he was secretive, so there was this dash of mystery when it came to his love interest,” he said chuckling.

To some extent, Engr. Exaltacion and his classmates already sensed a deep religiosity in the young Bishop Villarojo.

“Perhaps it had something to do with San Jose (CSJ-R) being a religious school,” he said. “But with him being the serious type, I was actually thinking he would choose the contemplative way of life (become a monk).”

Engr. Exaltacion added that he didn’t find Bishop Villarojo diligent (naning) in his studies because he was “innately intelligent.”

Present also during the ordination was another high school classmate and fellow religious, Rev. Fr. Rouel M. Sia, OAR, who is assigned as administrator of San Sebastian-Recoletos in Manila, USJ-R’s sister school.

Fr. Jaruda said CSJ-R batch 1984, of which Bishop Villarojo and Fr. Sia are a part of, has produced three other priests, bringing the total religious members to five.

Clad in red vestments, Villarojo lied flat, face down before the altar as the congregation kneeled down and chanted the litany of saints to invoke the intercession of God’s holy men and women.

Archbishop Palma, who was the main consecrator, then laid his hands on Msgr. Villarojo’s head as a way of passing down on him the Office of the Apostles.

From the Greek word “episkopos” (overseer), the episcopal minister or the bishop is a direct successor to the apostles. They have, by divine institution, taken the place of the apostles as pastors of the Church.

Cardinal Vidal and Archbishop Pinto, who were co-consecrators, also laid their hands on the monsignor, as well as all the other bishops in attendance.

In the Acts of the Apostles, believers of the early Gospel were growing rapidly that the apostles had a hard time attending to them all. So they delegated their functions to new and worthy disciples by praying and laying their hands on them (Acts 6:5-6).

One of the first ordained disciples by the apostles was St. Stephen, considered the first martyr of Christianity.

Villarojo then received a bishop’s white miter, purple skull cap, ring, and crozier or shepherd’s staff—a sign of his pastoral ministry and duties.

Archbishop Palma reminded Villarojo that the title of bishop is not an honor but a function, and therefore a bishop should strive to serve rather than to rule.

Cardinal Vidal, in his homily said it was a “dream-come-true” for him to have Villarojo ordained as bishop. Villarojo was Cardinal Vidal’s personal secretary from 1994 to 1998, immediately after his ordination to the priesthood.

“At first, I was so afraid of him. Why? Because he was too gwapo (handsome). And so he got the first attention from the crowd,” the Cardinal said, eliciting laughter from the congregation.

In 1998, Villarojo went to Rome and obtained a doctorate in philosophy from the Pontifical University of the Holy Cross. After completing his studies, he came back to Cebu in 2001 and resumed his old post as Cardinal Vidal’s confidant until 2010.

Weight of the burden

Upon Cardinal Vidal’s retirement, Villarojo was assigned as team moderator in the Our Lady of the Sacred Heart (Capitol Parish).

Cardinal Vidal, in a serious note, urged Villarojo to recognize the needs of the people, especially the poor; to love people and never to quarrel with women.

“It’s important for a bishop to know how to relate to them, to safeguard relationships and value prayer and pastoral equality,” he said.

Archbishop Pinto, in his message to Villarojo, urged the newly ordained bishop to remain fervent in his duties, especially that he holds a high position with the organizing committee of the 51st International Eucharistic Congress (IEC) in Cebu in January 2016.

Villarojo is currently the secretary-general of the 51st IEC local organizing committee. He said preparation for next year’s big event in Cebu City shall continue.

In his speech, Bishop Villarojo said he is touched by the show of support by his fellow priests and the faithful but at the same time he is also overwhelmed by the magnitude of a bishop’s duties.

“I am just beginning to see how much burden you are all carrying, none the least of which is to be uprooted from where you have grown and established your comfort zone to be transplanted to a place whose language you do not even speak,” he said of his fellow bishops.

“It must have required too much love in your heart to be carrying the responsibility of leading the flock not just for a six-year term or two but for a lifetime,” he added.

“Now I understand what it means to be asked by the Lord, ‘Peter, do you love me more than these? Feed my sheep,’” he said, referring to Peter’s reinstatement by Jesus as the Church’s unquestioned leader.

Bishop-elect Oscar Florencio of the Archdiocese of Palo also graced the ordination. Pope Francis announced last July 3 in St. Peter’s Basilica in Rome that he and Villarojo are to be elevated to the rank of bishops.

Florencio will be ordained at the Palo Cathedral on Sept. 4 before he will be welcomed to Cebu on the 7th. He and Villarojo will serve as auxiliary bishops of Cebu, helping Archbishop Palma run the archdiocese.

The appointments will bring three auxiliary bishops for Cebu, although Bishop Emilio Bataclan is reaching the mandatory retirement age of 75 for bishops in September.

In an interview with reporters immediately after the Mass, Archbishop Palma said Villarojo and Florencio will fly to Rome to attend a seminar after the latter’s ordination.

Due to his duties as secretary-general of the 51st IEC, the archbishop said there will be no changes in the new bishop’s parish assignment.

“Until the end of the IEC, he (Villarojo) will stay at the Our Lady of Sacred Heart Parish,” Palma said.