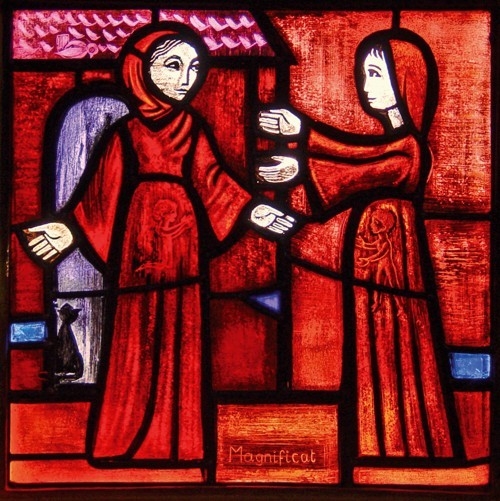 Mary Praises God
“My soul magnifies the Lord,
47and my spirit rejoices in God my Savior,
48for he has looked with favor on the lowliness of his servant. Surely, from now on all generations will call me blessed; 49for the Mighty One has done great things for me, and holy is his name.

God’s Deeds to “those who fear Him”

50His mercy is for those who fear him from generation to generation.
51He has shown strength with his arm; he has scattered the proud in the thoughts of their hearts.
52He has brought down the powerful from their thrones, and lifted up the lowly;
53he has filled the hungry with [of] good things, and sent the rich away empty.

54He has helped his servant Israel, in remembrance of his mercy,

55according to the promise he made to our ancestors,

to Abraham and to his descendants forever.”

56And Mary remained with her about three months and then returned to her home.

The Context of the Magnificat

This “magnificat”, as commonly known, is Mary’s reaction to two events narrated to us by Luke:  a) In vv.26-38–the announcement made by Angel Gabriel to Mary about her great responsibility despite her lowly beginnings i.e. to be the Mother of the Savior of Israel and all people;  and (b) In vv. 39-45, the signs God showed to Mary in the person of her cousin Elisabeth who, according to human standards was naturally incapable of childbirth, was now on her sixth month of pregnancy, and the words she addressed to Mary:  “Blessed are you among women, and blessed is the fruit of your womb” (v.42); and Elizabeth’s address to Mary as “Mother of my Lord” (v.43).

The magnificat then is a natural out pouring of a prayerful and humble heart of Mary.  It is a prayer that stems from deep faith and confidence in God, who is very serious at re-entering humanity to claim for Himself His lost creation.  At the same time, the prayer is an expression of a courageous acceptance of God’s will to take on the role God has appropriated for Mary.  Surely, Mary has not known the various consequences of her “fiat” but because of the signs she had seen in and heard from her cousin Elizabeth—Mary has cast her die to embrace God’s plan setting aside her own personal dreams and projects.

The Theme of the Magnificat

This is the thematic statement of this prayerful outburst of Mary. Her whole being: life, soul and body, give praise, render thanksgiving, and offer worship to God himself.  And in the most intimate manner, she has personally called God as “My savior.”  As Mary is to set on a new role in the economy of Salvation, she needs to have a very personal relation with the Father.  Yahweh, is no longer considered as an impersonal and a faceless God.  Rather, He is a father, the Savior.

Mary is a sign of a very great contrast:  she is given a great responsibility carry—as the Mother of the Savior of Israel—but she comes from a very lowly beginnings. She is not connected to the lineage of Moses, neither to David nor to any important priestly or prophetic class. On a very personal note, Mary herself realizes this, “how can this be…?” A mother of a Savior, who, in the Old Testamental times, must spring out from the royal lineage of David, the greatest of all Kings in the History of Israel? Who was then Mary to take the role as Mother of the Savior?

However, Mary realizes that God’s words for her to be the Mother of the Savior was not a joke. She has seen Elizabeth, the divine sign for her to believe God’s word, already six months pregnant, and she has heard from Elizabeth herself God’s confirmation that indeed she is the “Mother of my Lord.” These were enough proof for Mary, the servant of God, to believe that God is truly serious with His plans to save humanity, to send to the world His own son through her.

Thus in this prayer of Mary she recognizes all these in the words, “ He [God] has looked with favor on the lowliness of [Mary] his servant” (v.48) and that according to Mary herself “the Mighty one has done great things for me…” (v.49)

The same “Magnificat” manifests that God’s graciousness does not end with Mary. She is not the end of God’s plan. She is part of the grand plan of God to re-enter and re-claim humanity through Jesus. And Mary recognized this very well.

What does this “fear of the Lord” consists of? In this same prayer of Mary we are given a clue. Those who “fear the Lord” are those hunger for good things.” (v.53) Here “things” does not mean material possession. Mary herself is the example. All through out her life, good deeds and characters were what she has been striving to achieve. And thus, even in her lowly condition she was given the greatest of privileges and responsibility to be the Mother of the Savior. To these kinds of people (seeking to achieve in their life good deeds, worthy works, and best virtues) God will fill them up. And this is the “mercy” of God– Giving the good things to those who seek for them: sharing mercy to those who are striving to be merciful, implanting the virtue of patience to those who try patience; showing the virtue of love and a forgiving heart to those who practice love and forgiveness.

Again the “fear of the Lord” is manifest in humility of heart (v.52). Humility of heart is made contrast with those who are haughty, arrogant and full of pride. While the latter he will “sent away empty” and de-throne”, the former God will lift them up.

God’s deeds to Israel can be summarized as God’s fidelity. God is a faithful God and He will remain faithful to his promises even if Israel herself will not be faithful. God cannot break his promise. God cannot become unfaithful. Infidelity is not listed in the personal vocabulary of God himself.

Only those who are humble of heart, only those who seek to perform good deeds, virtues and goodness in one’s life will receive mercy from the Lord himself.

If one listens to news over the radio and turns on the television, one can ask how much “fear of the Lord” is there in our society today; or better how lacking is the “fear of the Lord” among us who are said to be believers of God himself?

Rampant corruption in the government, denudation of forests leading to the waste of life; the poor amongst us remain to be poor without the hope of getting a better life; while the rich and the famous, many times through dishonesty and injustice, continue to enjoy, even not having “fear of the Lord.”  Our political exercise has become a big joke.

The Promise of a Mighty and Powerful God

To those who “fear the Lord” God will show mercy; to those who are not, the justice of God, the mighty power of God, will, in time, catch up with them. May God’s patience be a reminder of his love and desire not to destroy any of his loved ones.