The Spires of San Sebastian 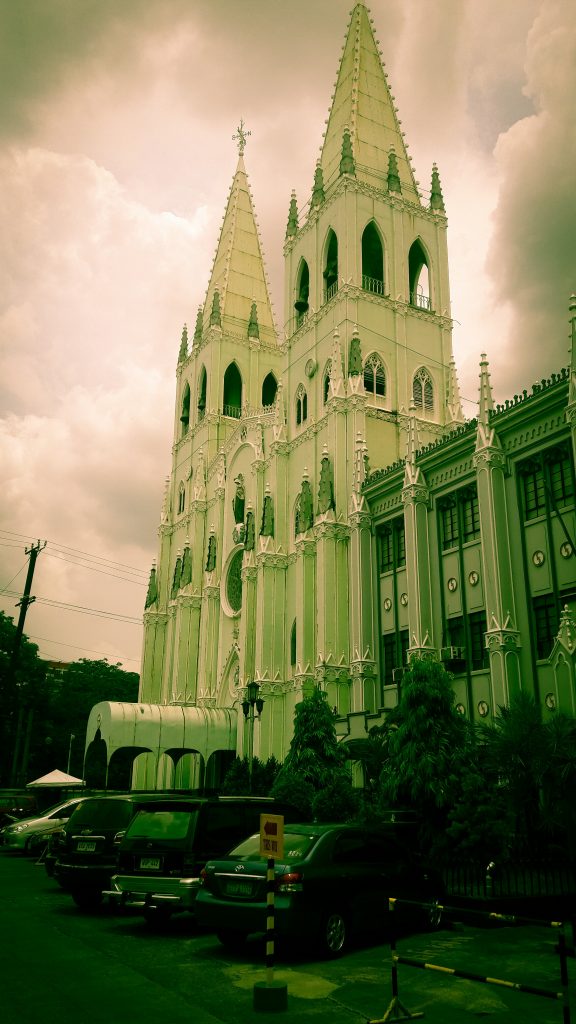 Publisher’s Note: This article comprises one of the chapters of the book: AUGUSTINIAN RECOLLECTS IN THE PHILIPPINES: HAGIOGRAPHY AND HISTORY. The publisher saw it appropriate to re-publish in time for the 125th Anniversary Celebration of the all-steel Church Basilica.

Standing loftily out there in the heart of Manila are the grandiose slender spires of a temple of God, so prominently visible from the Bay, so dear and so renowned among the folks of Quiapo, Sampaloc and San Miguel. Unfortunate it is that so little is known of its unique Phoenix‑like past its invaluable artistic and architectural legacy. So little has been written about its founders’ proverbial patience and perseverance. So little has been related about the long journey of the holy image of the Lady of Mount Carmel from the hallowed Carmelite cloister in Mexico into the hearts of Manilans. That magnificent temple of pure Gothic style, that first Philippine shrine of Our Lady of Mount Carmel is San Sebastian church. It was one hundred years old in 1991. It behooves us all to pay tribute to San Sebastian church and to all what it stands for.

The convent and church of San Sebastian were erected in 1621 in a place situated between Sampaloc and Quiapo districts, outside the Walled City. The barrio was then called Calumpang because of the abundance of trees of that name found in the area. It was flood‑prone, sparsely populated and in unhealthful condition. Yet Rodrigo de San Miguel—Rodrigo Móriz Aganduru in history—vicar provincial of the Philippine Recollects, found in it an ideal place for repose and spiritual solace for the missionaries. Most of all, the pastor in the friar believed that the 300 residents of Calumpang needed spiritual attention.

Augustinian Recollect historian Juan de la Concepción informs us that the convent and church were both dedicated to Saint Sebastian because of the founders’ special devotion for the brave Roman martyr. Hence the name San Sebastian church. Among devout residents of the area, it is indistinctly known as Iglesia de Nuestra Señora del Carmen, Our Lady of Mount Carmel church. Don Bernardino del Castillo, a regidor of Manila and benefactor of the Recollect community, built the first stone church that was to become the shrine of the Virgen del Carmen, as she is fondly called. Here she has been venerated for nearly four centuries by the Augustinian Recollect community and the People of God in the Philippines.

Origins of the Marian devotion

The statue of the Virgen del Carmen, according to Benito de San Pablo, prior of San Sebastian convent in 1742, was brought to Manila in 1618 by Rodrigo de San Miguel. En route to the Philippines from Spain, the Recollect missionary stopped at Mexico City where Discalced Carmelite nuns of San José monastery in Mexico City entrusted the image to his care. In Manila, the missionary could not find a more propitious sanctuary for the Virgen del Carmen than the newly built San Sebastian church where the Marian icon was enshrined on 5 May 1621. Thereafter, it would be for over two hundred years the sole Carmelite shrine in the archipelago.

It took no time for the fame of the sacred icon to spread throughout colonial Manila because of the graces and special favors attributed to the Virgen del Carmen’s intercession and granted to all her devout believers. An extraordinary event in the seventeenth century helped increase the people’s devotion to her. There was a gravely ill prelate, Msgr. Juan Vélez, dean of the Manila cathedral and later bishop of Cebu. He had given up all hope in physicians. But he had earlier heard about of the prodigious cures brought about through the Lady’s intercession. When the ailing prelate wanted to have the miraculous image in his residence, the Augustinian Recollects gladly acceded to his request. “So evident was the protection of the Virgin in said case,” relates Recollect chronicler Licinio Ruiz, “that in a matter of days the ailing man was completely healed.”

In deep gratitude for the extraordinary favor attributed to the Virgen del Carmen’s intercession, Msgr.Vélez soon spread the news of the miraculous healing. He likewise urged everyone to cultivate a special devotion to her. In addition, he set up in the church a cofradía del Carmen, Confraternity of Our Lady of Mount Carmel. The superior of the Carmelite province of Andalusia in Spain authorized in 1650 the prior of San Sebastian convent to bless and impose holy scapulars. In 1691, the prior general of the Carmelite Order sanctioned this earlier authorization. Note must be taken that no branch of the Carmelite Order was established yet in the Philippines at that time. Hence, the Augustinian Recollect religious were the only ones authorized to canonically set up the archconfraternity in the islands.

The image of the Virgen del Carmen has been a silent testimony of the patience of Augustinian Recollects and the faith of the Filipino people through the centuries. Recollect archivist-historian Rafael García affirms that at least three churches had been devastated by seismic catastrophes. He further states that the primitive church of 1621 was torched during an uprising of the Sangley population in Manila. The Recollects then built the second stone church that was later leveled to the ground by a violent earthquake in 1645 dubbed San Andrés Quake. Their San Nicolas church in Intramuros was not spared either. A new stone edifice for the Virgen del Carmen was reconstructed. The third church survived the plunder perpetrated by British occupation troops in the 18th century. The church then underwent substantial repairs in 1859. But an even stronger quake played havoc on the capital in June 1863. The Manila cathedral collapsed. The restored San Sebastian church tottered to the ground and a decision to tear it down had to be firmed up.

With the proverbial patience of Job, the unfazed Recollect community rebuilt on its ruins another place of worship. Described on its inauguration day in January 1867 as a “sanctuary of svelte proportions, of elegant forms where strength and taste are on a par,” the beautiful temple of stone was sadly short‑lived: it lasted but thirteen years.

A series of violent quakes and aftershocks on 15, 18, and 20 July 1880 shook the ground from Pampanga to Batangas. Church bells in Manila eerily tolled by themselves. Paco church almost completely sank to the ground. A tower of San Agustín church in Intramuros cracked. Statues in San Francisco church near Puerta del Parián fell to the ground and shattered into pieces. Strangely, the image of the Virgen del Carmen in San Sebastian church was left intact. The edifice, however, was so greatly damaged that the Augustinian Recollect priests were forced to close its portals. In May 1887, they started clearing the rubble and prepared to lay the amazingly solid foundations of the fifth church.

Blueprints for a prefabricated steel church

As early as January 1883 the Augustinian Recollect community had decided to construct a new church that could withstand the forces of nature, one to be built of steel in its entirety. For this purpose, San Sebastian prior Fidel de Blas consulted the Spanish architect Genaro Palacios y Guerra, then Director of Public Works in Manila and a pious Marian devotee. In June 1883, Palacios presented the blueprints for the new shrine. After bids and negotiations with several European companies, the contract was eventually awarded on 9 March 1886 to a Belgian firm Societé Anonyme d’Enterprises de Travaux Publiques of Brussels by Toribio Minguella, the procurator and vicar provincial in Madrid.

Meanwhile in Manila, the blueprints for the colossal project were submitted to the governor general by Fidel de Blas’ successor in San Sebastian priory, Gregorio Sesma. In June 1886, the Public Works inspectorate readily approved the project because of its “stability, clear and perfect concept, aesthetic qualities and architectural beauty.” In the meantime, Genaro Palacios and a knowledgeable Recollect brother—Gregorio Navas—journeyed to the Belgian firm’s foundry shop in Binche where they supervised the work. The first steamship William Burkitt, loaded with prefabricated steel materials of the two spires, façade, and stretches of the central naves of the new temple, reached Manila in June 1888. A total of eight ships carrying glass artwork and over 1,527 tons of steel materials for the church were used in the four‑year project (May 1887‑July 1891).

Showcase of international talents and skills

San Sebastian Basilica was an international project of sorts: finances, manpower, lime, cement, lumber for the foundation, pavement, altars and pulpit from the Philippines; prefabricated steel and iron structure from Belgium; chandeliers—donated by Filipino Carmel devotees—from France; stained glass artwork and mosaics for the windows from Germany; ships and planning from Spain and ships from England. Aside from the Spanish architect Don Genaro Palacios, this major accomplishment likewise involved French, Belgian, English engineers and assemblers. Two Spanish Augustinian Recollect religious brothers, Remigio San Miguel and Gregorio Navas, worked closely with them in the duration of the project.

The images in the retablos, pulpit and confessionals were carved by Eulogio García, a young Filipino sculptor. Another Filipino Lorenzo Guerrero, Juan Luna’s teacher, painted the designs in the retablos and the confessionals. The painting of the whole church was supervised by Lorenzo Rocha, director of the Escuela Superior de Pintura, Escultura y Grabado.

On 15 August 1891 the new basilica was solemnly blest by Archbishop Bernardino Nozaleda of Manila. Its doors were once again opened to the Filipino people. After the inauguration, the clergy and laity held a religious triduum as thanksgiving for the completion of the monumental project.

A year earlier, on 24 June 1890 Pope Leo XIII had granted basilica status to San Sebastian church, attached to Saint Peter’s Basilica in the Vatican City. Two weeks thereafter, it was further attached to the Basilica of Saint John Lateran, the pope’s cathedral as bishop of Rome, by virtue of which it shared the special privileges of the two eminent basilicas.

The San Sebastian Basilica of Architect Genaro Palacios undoubtedly holds an enviable and enduring place in the art history and engineering feats. It was the first all‑steel church in the world. It was also the first steel structure in Asia and the second in the world after the Eiffel Tower of Paris. The prefabricated all-steel basilica indeed is a structure sui generis in Asia. Unknown to many, the stability of the church is perfect, a result of its foundation: a hull‑shaped framework of a net‑like transverse and longitudinal latticework filled with lime, clay, sand and cement. The center of gravity of the edifice is way down below its massive concrete foundation, making it harmlessly sway with, and withstand, intense seismic movements and typhoons.

Its polychromatic glass artwork and mosaics from Linnich, Germany can proudly compete with those of the famed churches of Rheims and León. Its Gothic architectural style displays its slender spires pointed heavenward in unwavering defiance against the elements and in loving memory of its four predecessors, all worthy houses of God. In 1973 San Sebastian Basilica was deservedly declared a national historical shrine by the Philippine government.

Citadel of Faith for another hundred years

So the next time you pass by San Sebastian Basilica and gaze at its proud and majestic spires painted in a lighter shade of green, feel proud of our world-class Filipino architectural heritage. Pay tribute to the selfless sacrifices and the indomitable spirit of the Augustinian Recollect community that struggled to erect one church after another to fulfill a commitment made centuries ago to the Virgen del Carmen and to the Filipino people. Remember the generations of Christians of yore, their steadfast belief in God and filial confidence in the Blessed Mother of His Son and Our Lord Jesus Christ.

And never forget to breathe a prayer that San Sebastian Basilica shall remain for hundred years or more a firm citadel of faith and a radiant beacon of charity standing prominently out there in the heart of Manila.

Emmanuel Luis A. Romanillos. The Spires of San Sebastian. Manila 1991.