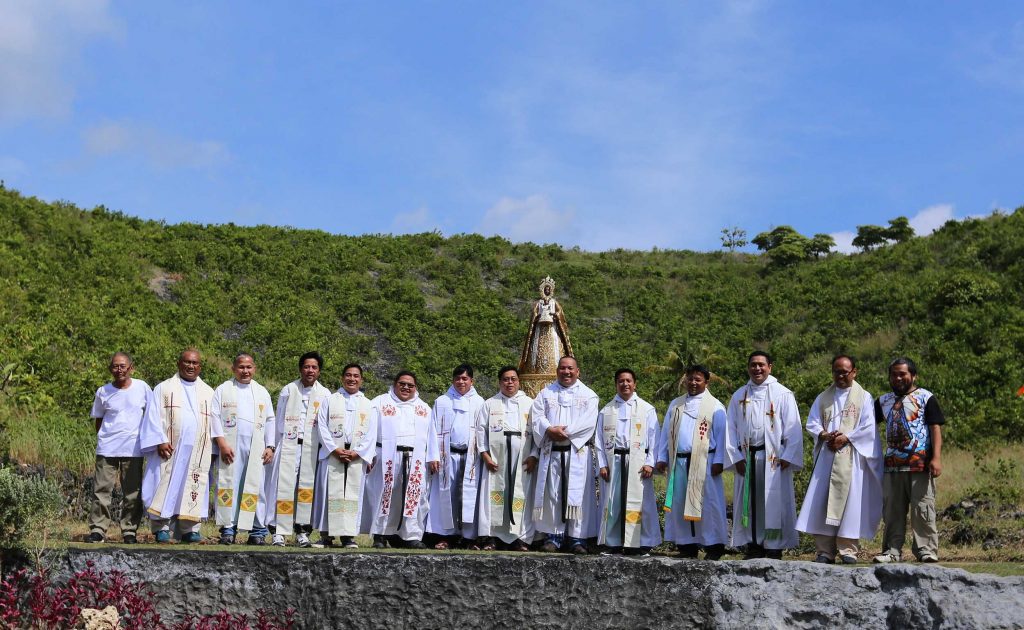 The Recoletos de Cebu Community blessed and inaugurated the Recoletos Eco-pilgrimage Park in Danao City northern Cebu and dedicated it to Mary under the title Nuestra Señora de la Salud (Our Lady of Health) yesterday, feast of the Queenship of Mary.

Rev. Fr. Edgar Tubio, OAR officiated the first mass at the newly constructed pavilion there, concelebrated by the Recoletos de Cebu Community priests who are mostly religious administrators of USJ-R.

In his homily, Fr. Tubio told members of the Josenian Community and the local community of Sitio Lucob, Brgy. Maslog in Danao that the ecopark is a reminder of God’s blessings and man’s stewardship.

“God blessed us with a very beautiful creation as you can see all around you, and as stewards, we have to take good care of it,” he said.

The pavilion is located at the heart of the ten-hectare ecopark, on a valley or a flat area surrounded by hills. Right above the pavilion on slightly elevated ground is perched the small statue of the Nuestra Señora de la Salud.

The eco-pilgrimage park is the first and only ecopark of the Order of the Augustinian Recollect (OAR), said USJ-R President Rev. Fr. Cristopher Maspara, OAR after the mass.

It was first launched in August 28, 2015, feast of St. Augustine, in time for the opening ceremony of the international year of educational apostolate of the Order.

Fr. Maspara said the Order chose to place the ecopark under the protection of the Nuestra Señora de la Salud because the first Recollect missionaries who arrived in the country in 1606 also placed themselves under her protection.

“The inauguration and the dedication of this eco-pilgrimage park is a highlight of two important occasions,” Fr. Maspara said.

“First is the closing of the international year of educational apostolate which will soon close on September 2, and our five-year preparation for the 400th foundation anniversary of the Recoletos de Cebu Community in the year 2021.”

He said the first Recollect missionaries first arrived in Cebu in May 1606, but they didn’t establish a community here. Instead, three weeks after their arrival, they went to Manila and established their first house in Bagumbayan (now Intramuros).

They returned to Cebu 15 years later or in 1621, and it was only then that they established the Recoletos de Cebu Community.

“From then on, the presence of the Augustinian Recollects in Cebu remains uninterrupted. Therefore in 2021, we will celebrate the 400th year of continuing presence and apostolic work of the Recollects here,” he said.

Bro. Jaazeal Jakosalem, OAR, Property Administrator of USJ-R and a staunch environmental advocate, said that aside from propagating the devotion to the Nuestra Señora de la Salud, the ecopark would also serve as the site for forestation efforts of USJ-R.

“USJ-R has always been known as a ‘green university’,” Bro. Jakosalem said, citing the university’s Win on Waste program, its materials recovery facility, and the countless tree-planting initiatives on various private and public places.

“We do not know what happened to what we planted because we don’t own the lot,” he said. “But now that we have this ecopark, we can now monitor our greening efforts.”

He revealed that the university has already planted around 1,400 fruit-bearing trees in the ecopark since it was first launched in August last year, but that only 800 trees survived.

USJ-R is looking to plant 75,000 fruit-bearing native trees like mangoes and guyabano for the next seven years in time for the University’s 75th founding anniversary in 2022.

Recoletos de Cebu Community, with members of the Josenian Community, would also hold at the pavilion daily rosary, catechism classes for children, tutorial classes for students, environmental awareness campaigns, and livelihood programs initiative for residents of the nearby Sitio Lucob.

They would also facilitate the establishment of basic ecclesiastical communities in the area.

Celestina Alao, a 65-year-old resident of Sitio Lucob, said she is glad that the ecopark is located in their very community, a concrete reminder of God’s presence in their midst.

(Sometimes I would forget to hear mass or pray because of the work here in the farm. Through this pavilion, I would remember God always.)