Recoletos invited to return to Pangasinan 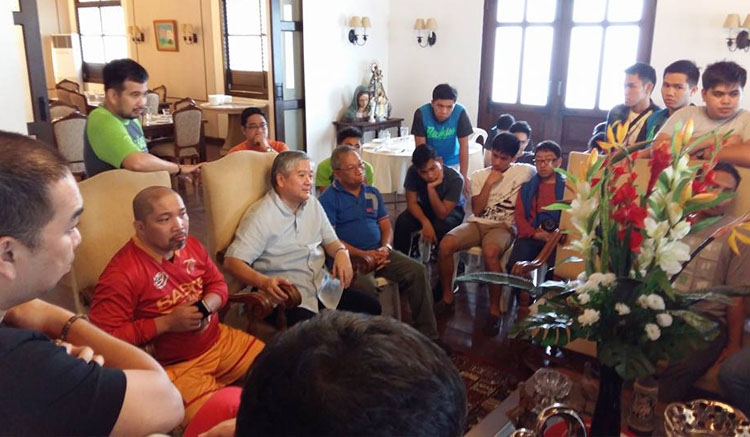 DAGUPAN CITY, Pangasinan—“I brought forth my wish that the Recoletos open again a mission in Pangasinan,” wrote Most Rev. Socrates Villegas, D.D., archbishop of Lingayen-Dagupan, to the Prior Provincial after the fraternal visit of the Recollect religious and seminarians to the archbishop last September 1, 2016.

The visit stemmed from an invitation in early August on the part of the archbishop himself to Fray Rafael Pecson, OAR who is currently the Dean of Studies of Casiciaco Recoletos Seminary in Baguio City.

The said archbishop ordained Fray Pecson and 9 others to the priesthood last December 5, 2015.

“When he knew that I am assigned in Baguio and in a formation house, the idea of a friendship game surfaced. I asked the permission of the rector (Fray Bernard Amparado, OAR) and he approved it,” recalled Fray Pecson.

But Archbp. Soc, as he is more familiarly called, later realized: “What about a basketball match between my priests and the OAR?” The invitation, thus, was extended to the Recollect religious.

At midmorning of September 1, the basketball game between the college seminarians of Recoletos de Baguio and those of the archdiocese was played at the gym of Mary Help of Christians High School Seminary in Binmaley. Casiciaco’s best took home the better part.

Towards noon, the clergy of the archdiocese met the Padres Recoletos captained by Fray Amadeo Lucero. The Recollects not only won the match; they also gained stronger ties with the diocesan priests in this part of the Panggalatok-speaking province.

Although the volleyball varsity of CARES was not able to meet with its counterpart due to a flooded court, the players just cheered for their teams during the basketball tournament.

Off they went to the Arzobispado de Lingayen in Dagupan City after the games for lunch. The chancellor also mingled with them at the refectory.

And when they already had rested awhile, they celebrated the holy mass at the cathedral with Archbp. Soc as the presider and homilist. “His sharing focused on a challenge particularly to the seminarians,” said Fray Henry Santiago, OAR who was among the friars present. Frays Edgar Tubio and Leonardo Pauligue stood as altar concelebrants.

The meal as vehicle for fellowship was palpably felt since after the holy mass, snacks was served at the recibidor. There, socialization continued. The seminarians rendered a Marian song and the ever-favorite “Magpapari” while the religious, with Fray Glynn Ortega on the guitar, sang in chorus “A song for you” composed by Fray Leander Barrot.

In his conversation to an exclusively-Recollect audience, the archbishop intimated his desire for the Recollects to come back to this portion of Luzon where former Recoletos missionaries had worked. Sincere to his heart’s yearning, he echoed it in his letter to the Prior Provincial: “we can offer an already established parish with modest rectory.”

Among the very first things he inquired about when he was transferred to this archdiocese was whether there are religious working in the area. Although the Catholic Directory of the Philippines listed 12 male and 11 female religious institutes present in the entire archdiocese, still he needs more, especially the Recoletos, to come and collaborate.

“As a matter of conviction in Church administration, we, in Lingayen-Dagupan, do not distinguish between diocesan and religious clergy. The diocese is enriched by the charisms of our religious confreres as we hope to also contribute to the growth of their vowed lives,” Archbp. Soc pointed out.

The special invitation for the Recoletos had basis in local history: “The Augustinian Recollects, as you know,” he said in his letter to the Father Provincial, “were the first missionaries to introduce the Christian faith in Bolinao. Although that presence was mainly in the present Diocese of Alaminos, we in Pangasinan remember gratefully those pioneering years of the Recoletos,” the bishop continued.

According to the Recollect historian, Fray Angel Martínez Cuesta, Bolinao was founded in 1609, three years after the first arrival of the Recollects in the archipelago.

The Prior Provincial, Fray Dionisio Selma, OAR was happy to receive the invitation from the archbishop who also heads the Catholic Bishops Conference of the Philippines (CBCP).

It was among other invitations including those from local ordinaries abroad that Fray Selma received and responded.

To that from Lingayen-Dagupan, he said he was thankful “for the warm welcome and hospitality you accorded to my brothers and seminarians during their visit to your archdiocese. It was, indeed, a refreshing visit to that area where our predecessors used to do mission works,” he wrote in reply.

In the same tenor of sincerity, Fray Selma also expressed gratefulness “for the invitation to collaborate with you in the pastoral works of the archdiocese. Actually, this is part of what we call Life and Mission Project (LAMP) of the Province of St. Ezekiel Moreno.”

But he briefly informed Archbp. Soc that the upcoming 55th General Chapter of the Order will already be next month, on October 2, in Rome, ergo: “The Provincial Council deems it more opportune to decide after the said chapter when the expected restructuring shall take place.”