Fr. Provincial’s message on the occasion of the 18th anniversary of the province 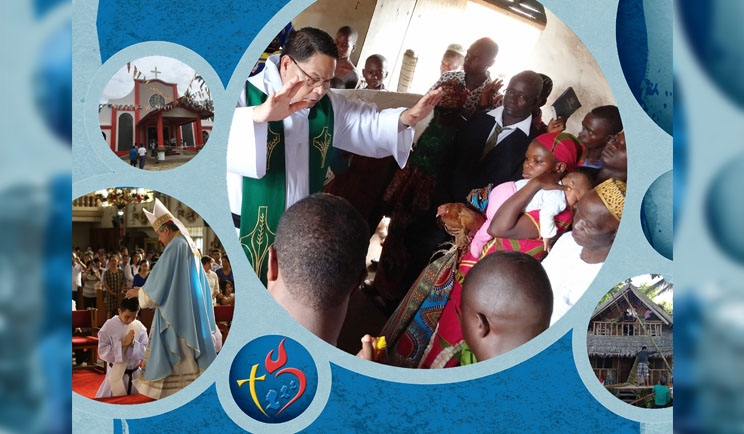 TO ALL THE BROTHERS OF THE PROVINCE OF ST. EZEKIEL MORENO

How amazingly God’s grace is working in us all these years! And how deeply we have trusted in the Lord of history, in Jesus who pours forth his Spirit in our hearts1 so that, despite the vagaries of time, place, and culture, we are able to live and work in the Augustinian climate of “anima una et cor unum in Deum.”2

“In the beginning we were few, but we were [made] impassioned by Jesus Christ. We… were filled with the zeal to evangelize.”3 The Report of the then newly created Province had shown that “as of December 1998” the number of religious was 128.4 Fast forward to the present: as of November 24, 2016, the number rises to 172. Which means, with an increase of 44 within these periods, at least two religious, on average, are added to the family each year.

We are cognizant, however, that there is more to reckon with than what these figures project. The oft-repeated preference for quality over quantity particularly in the religious realm brings this snippet of wisdom to the fore: “what is required of [us] is not success, but commitment to faithfulness.”5

With a median age of 46, the Province is the youngest in the Order. While it indicates vitality in the youthfulness of the members, it spurs us on to rather draw strength from our daily encounter with the Author of our consecrated life. Such personal encounter, if we delve further into Pope Benedict XVI’s Deus caritas est 1, “refers to Jesus as a person, and not only the teachings drawn from the example of his life or the historical consequences of his work.”6 This transformative encounter which finds its “culmen et fons”7 in the Eucharist is the very reason why we remain relevant in the parishes/chaplaincies, mission areas, and schools. This is the selfsame reason why we get involved in social and ecological concerns, history and cultural heritage, communications media, resource mobilization, among others.

This encounter is the lynchpin to our growing vitality as a Province. Never should we ever miss this life-giving opportunity for which, as Augustinian Recollects deployed in the Philippines, Taiwan, Sierra Leone, Saipan (CNMI), Panama, Italy, Spain, and the USA, we strive to shape up according to our primary objective of this triennium: to become “missionary disciples and prophetic witnesses of the Joy of the Gospel among the poor.”8

Together we have dared to expand the terrain of our pastoral ministry, either as part of our interprovincial collaboration or as response to the Life and Mission Project (LAMP) of the Province. This was among the lofty aspirations determined by the previous provincial chapters, for instance: “to become ‘a leaven of communion at the service of the universal Church’”,9 and “to emulate [the] life and example” of St. Ezekiel Moreno, a model evangelizer, religious and pastor.10 These will definitely continue to be our program of life “in season and out of season”11  since we are “permanently in a state of Mission”.12 And right now, we have pending invitations from different overseas and local dioceses to collaborate with them. But we have to take as a criterion of apostolic action not only where the Church needs us, but also where the Church sends us. We beg, then, for divine enlightenment in our collective discernment and decision-making in this regard.

The 55th General Chapter convened on October 2-26, 2016 in Rome marked a major turning point in the life of the Order in general, and of our Province in particular. The repercussions of the approved Life and Mission Project of the Order which includes the juridical restructuring of the eight provinces into four usher in a higher level of awareness about our own vocation, identity, and mission. And this occurs in time for our 18th founding anniversary few days from now!

One small detail that I would like to mention has something to do with a milestone 395 years ago: the first General Chapter of the Recoletos as a Congregation on November 1621 in Madrid. In that historic Chapter, the 28 convents in Spain and in the Philippines were divided into four provinces, namely: Castille (St. Augustine), Aragon (Our Lady of the Pillar), Andalucia (Bld. Thomas of Villanova), and the Philippines (St. Nicholas of Tolentine).

Based on this, allow me to note some curious items for juxtaposition: In 1621, “four” provinces were created and that the Philippines, the fourth one, remained as a separate province. After almost “four” centuries, the number of provinces doubled. But this year, 2016, these eight provinces underwent the needed restructuring process; they were reduced to “four” provinces in which the fourth one, where the Philippines belongs, remained intact. This latter scenario which “burns with the inspiring fire of the Holy Spirit”13 spawned greater responsibilities and tasks for our Province to accomplish in the next sexennium. Probably the twist to Ralph Waldo Emerson’s quote is true: “The prize of a job well done is another job to be done.”14

On this eighteenth year of the Province, the turning points are aplenty. We just need to review the LAMP of the Order, especially those sections that treat the various aspects of our religious life as a community or as individual religious.

Adelante! There is no better alternative than to move forward. Pope Francis, in his address to us, Capitulars of the 55th General Chapter, on November 20, 2016, at the Clementine Hall of the Apostolic Palace, said:

“The grateful memory of [Christ’s] love in the past impels us to live in the present with passion and greater courage. Thus we can ask him to command whatever he wishes, for to ask this implies freedom of spirit and availability. […] Neither failures nor other evils matter, because it is he who stands at the centre, it is he who guides us.”15

We must not be afraid, then, to march on and, in compliance with the demands of the proper authorities, even explore uncharted waters. The Holy Spirit will lead us. He will take charge all throughout our journey for another 18 years and beyond. Ours must be an active trust and docility in His never-failing guidance in all our plans and endeavors.

If we leaf through the pages of our OAR Constitutions and history books, we will see how the Holy Spirit works every step of the way. Our OAR Constitutions begin with “The Holy Spirit provides…,”16 noting that every gift comes from this “Lord, the Giver of life.”17 And was it by coincidence that, on February 22, 1606, in the last phase of their voyage, from Mexico to the Philippines, the pioneering Recollect missionaries boarded the galleon named Espíritu Santo?

A week after we shall have celebrated the “debut”, so to speak, of the Province, we shall proceed with yet another bigger celebration—the 428th anniversary of the Order on December 5. Again, this will be another occasion to refresh ourselves about how in 1588 the Capitulars of the Chapter of Toledo (Spain) were “aware of this divine inspiration and unwilling to oppose the work of the Holy Spirit.”18

Just like our forefathers, let us also be led by the same Spirit as we respond with joy and promptness to the calls and challenges of our time. To cite some of these:

With highest praise and gratitude to God, let us celebrate the 18th birthday of our Province. May I enjoin every community to make its own version of thanksgiving for this wonderful gift. The brothers may gather for a renewal input, celebrate a votive mass in honor of St. Ezekiel Moreno, and share lunch or dinner together.

Finally, let me own the words of Pope Francis during our audience with him: “Dear brothers, I invite you to hold fast to the dream of Saint Augustine to live as brothers with ‘one soul and one heart’ (Rule 1, 2) with a renewed spirit that reflects the ideal of the first Christians and becomes a prophetic sign of communion in our world so that we may rid ourselves of divisions, conflicts and exclusion, and allow harmony and dialogue to reign.”23

Through the intercession of Nuestra Señora de la Salud24 and our patron, St. Ezekiel Moreno, may God bless each of us, our collaborators, our ministries, our activities and projects.

3 Eliás Royón, Discurso inaugural de la Asamblea de CONFER 2012, 17, quoted in: Document 7 of the Process of Revitalization and Restructuring of the Order, Rome, 2012, 9.

6 Document 4 of the Process of Revitalization and Restructuring of the Order, Rome, 2012, 13.

8 Primary Objective of the Province for the Triennium 2015-18.

12 Fifth General Conference of the Bishops of Latin America and the Caribbean, Aparecida Document, 29 June 2007, 201; Quoted in Evangelii Gaudium, 25.

14 Actually the above quote is equivalent to Jonas Edward Salk’s “The reward for work well done is the opportunity to do more.” The quote attributed to Ralph Waldo Emerson goes: “The reward of a thing well done is having done it.”

15 Address of His Holiness Pope Francis to Participants in the General Chapter of the Order of Augustinian Recollects at https://w2.vatican.va/content/francesco/en/speeches/2016/october/

21 Message of the 55th General Chapter.

23 Address of His Holiness Pope Francis to Participants in the General Chapter of the Order of Augustinian Recollects.

24 The image was brought to the Philippines by the 7th batch of Recollect missionaries who arrived in 1634.