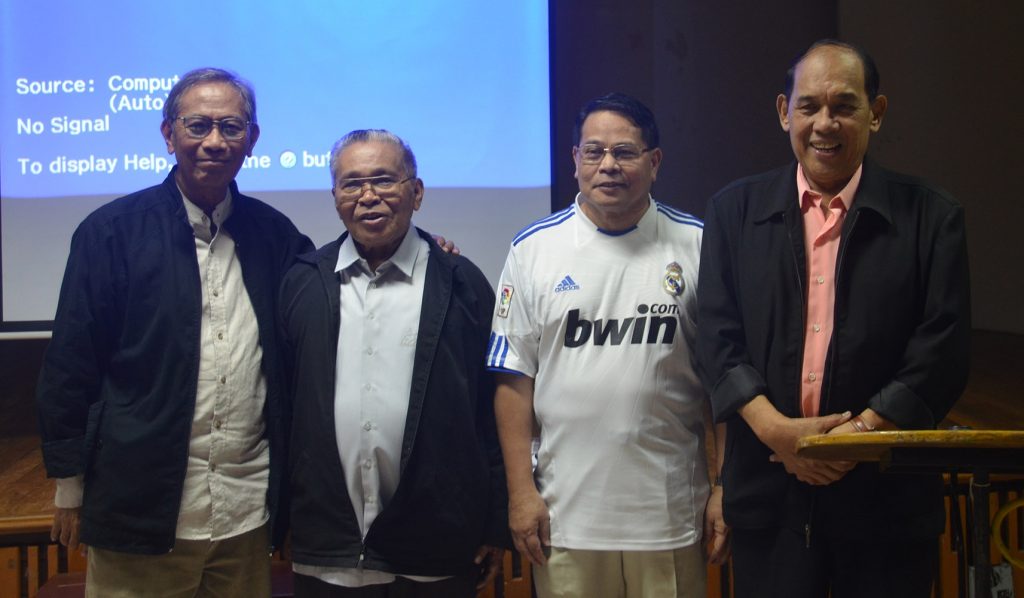 MANILA—Being connected with San Miguel Corporation spawned a perception that Recoletos is one of the richest, if not the richest, among religious institutes in the Philippines. True or False?

That one sizzling issue was, for the first time, answered in a forum by a former insider, Fray Emeterio Buñao OAR, who shared his rare experiences as a corporate Board Member of SMC, during his post-birthday party at San Sebastian convent in Manila last March 4, 2017.

Father Buñao was born 79 years ago, on March 3, in Bohol.

As a fitting testament of thanksgiving and celebration for the gift of life, a program was prepared by the community and was dubbed: “A Tribute to the Last of the Mohicans. Rev. Fr. Emeterio D. Buñao, OAR. The Last Recollect Director, SMC Board of Directors, on his 79th Birthday”.

“I was one of the Filipino Recollects to enter the SMC boardroom, and I was the last Recollect to step out of that same boardroom,” Father Buñao pointed out to justify why he is now being referred to as “The Last of the Mohicans”, from the title of a James Cooper novel about the French and Indian War of 1757.

Quite “fitting” indeed, for this year (come September 24 to be exact), he will be a golden boy as a priest, having been ordained in 1967. And more so because, right after his presbyteral ordination he was assigned here in Recoletos de Manila community.

At 5PM, inside the Little Theatre of San Sebastian College-Recoletos, Manila, the more than 2-hour program started, with the professed seminarians from the Recoletos Formation Center leading the singing of the Our Father.

Fray René Paglinawan, local prior, welcomed the “party-goers” who were mainly members of the Recoletos Family and close friends of the birthday celebrator.

Either as appetizer or backgrounder, a “Thumbnail History of the Procuración General OAR and San Miguel Corporation” was given through a powerpoint presentation by Prof. Emmanuel Luis Romanillos, a ForSOAR (Former Seminarian of the OAR) and a Church historian.

Then, the main dish, the Pièce de Résistance, by Father Buñao himself who was baptized with the epithet: “The Last of the Mohicans”.

The intermission number rendered by the prenovices and novices of Antipolo was a good break from a very engaging topic which previously appeared opaque particularly to the younger generations of Recollects.

Raul Fabella, PhD, a ForSOAR and a national scientist and University of the Philippines Professor Emeritus, gave his reaction from the Economist’s Viewpoint.

Curious questions and incisive insights emerged during the open forum.

Vespers and community singing of the birthday song followed, then, dinner.

Wasn’t this occasion a perfect timing so that Father Buñao could share the personal side of this untold story about the Recoletos-SMC connection in a venue or place where it had all began for him five decades back?

The then 29-year old religious admitted to having been caught flatfooted, when one day in 1968, the erstwhile Vicar Provincial, Fray Pedro Peña instructed him “to prepare to be one of the Board of Directors of San Miguel Corporation”.

Dictated by the prevailing corporate directorship policy in which any corporation doing business in the country must be controlled by at least sixty percent Filipino citizens, SMC had to make necessary adjustments since an overwhelming majority were either Spaniards or Americans.

Consequently, the then Spanish-dominated Province of St. Nicholas had to decide who among the Filipino religious would be qualified and appointed to sit in the Board.

In the words of Father Buñao, “two niños bonitos” were picked out: Fr. Emilio Larlar and himself. He added: “It just happened that we were in the right place and at the right time. Fr. Larlar was assigned in [San Sebastian] Cavite while I was in San Sebastian Manila. For that matter, it was handy for us to drive to our Makati appointments whenever a board meeting was scheduled.”

One thing unforgettable, according to him, was when the other board members, since day one of their reporting, addressed him as “Don Emeterio”.

“The title sounded funny to me, but there was no backing out,” he related.

Unlike him, Don Emilio Larlar did not stay long in the Board. He voluntarily resigned after 3 or 4 years. He relinquished his seat to Don Walthrode Conde who would also, after 2 or 3 years, leave the corporate world.

In an attempt to give an overview of the Recoletos’ entrance in and departure from SMC, Don Emeterio, the last Recollect Director of the said corporation, followed a set of nine questions, as if it were a comprehensive oral examination in Business Management.

One, when did you join the Board of San Miguel Corporation, and how long did you stay?

Three, how, to your knowledge, did the Order get involved with San Miguel? Who are your sources regarding this information?

Four, what do you remember from the board meetings? How was Andres Soriano Jr. as President? What was the participation of Ayala?

Five, how did Danding Cojuangco come into the picture?

Six, how did you receive compensation as a Board Member? Was it a monthly salary or annual salary?

Seven, what management lessons did you learn at San Miguel? What was the venue of the Board Meetings? How long did they last? What preparation did you have before each meeting? What were your feelings as you rubbed elbows with these people? What was your role?

Eight, explain the expansion of San Miguel and how the Recollects were “left out” while other parties bought more shares?

And, nine, what do you remember about the relationships with the Marcoses?

Prof. Romanillos’ backgrounder could somehow quench the thirst of those who long to know how the business love story between the Recoletos and SMC began. There might still be some gray areas; nevertheless, the initial input of this current President of the Academia Filipina de la Lengua Española already supplies the major landmarks of this interesting journey.

The Recoletos, through its Procurador General de Manila at that time, also got involved in “temporal goods” for the sustenance of convents and seminaries, in particular, and in the service of evangelization, in general.

Father Juan Labarga OAR, Procurador General from 1912 to 1919, “patiently laid the foundations for the economic development and growth of the Procuración General de Manila”. Two major business ventures were entered into during his term: the investment in the first cement factory in the Philippines which later became Rizal Cement based in Binangonan, Rizal, and the establishment, through a bilateral agreement with Don Enrique Maria Barreto de Ycaza, of the second brewery—Oriental Brewery—in the country.

Decades later, after his return from Spain, Señor Barreto set up the Oriental Brewery with Father Labarga. Both equally shared in the purchase of a machinery in Hongkong which was installed at a land parcel in Aviles [Jose P. Laurel Street today] in Manila. While the latter was the company president, the former was technical director or manager.

In 1913, Oriental Brewery started putting its products in the market. But the trend did not prove much economic success especially with its stiff competition with those of San Miguel.

The serious conflict between those two prime movers of Oriental Brewery was an added factor that led to a new path—“Barreto divested himself of all his shares in Oriental Brewery in exchange for the complete control and ownership of the cement factory” and “the pact between two breweries”.

At this time, the business strategy of then 21-year old Don Andrés Soriano y Roxas (1898-1964) conspired with the signs of the times. “He was totally convinced of the convenience of eliminating every competition in the beer market,” Prof. Romanillos stressed, paraphrasing the words of Father Simeón Asensio OAR who would later become Procurador General from 1945-1970 and from whom many things about this “business love story” were culled.

This historic event took place in August of 1919.

The initial agreement as to the share of the beer market was: the Oriental Brewery had the right to one-third of the market and the San Miguel Brewery to two-thirds.

“Apparently,” Prof. Romanillos observed, “this arrangement was not completely satisfactory, especially for the Procuración General de Manila.” Why?

The Province of San Nicolas de Tolentino was in terrible economic crisis for some years already. In 1917, large portions of the land properties of San Sebastian in Manila and the 6,000 sq. m. out of the one-hectare land occupied by the Immaculate Conception convent of Cebu were sold. In the latter, only 4,000 sq. m. remained, where USJ-R stands now.

Nonetheless, the said business transaction “would go down in history as the most transcendental and most significant, not much on account of the amount involved but to the importance this deal would entail in the future of the Augustinian Recollect Order and San Miguel,” Prof. Romanillos remarked.

“From that day onwards, … the economic trend would be all uphill, moving upward for a very long time.”

Although Father Buñao, or Don Emeterio, mistook 1890 as the year of tie-up between the Recoletos and San Miguel, his personal experiences as an insider in the top echelon of the company can never be less than credible and beneficial for his ministry.

He was convinced that “my presence as an SMC director added an ecclesial dimension to the corporation. I used to lead the prayers at the start of the board meetings. When an officer of the company passes away, they would usually call on me to lead the Responsorio for the dead.”

“The monthly meetings I used to attend… became a kind of classroom that prepared me on how to handle the affairs of the Recollect seminaries and schools,” he averred.

As to the departure of the Recoletos from San Miguel Corporation, Don Emeterio noted that when San Miguel went for intensive business expansion, it needed a good amount of working capital. “Sometimes, it turned to the stockholders for additional investments.”

“I remembered that the Recollects were invited to invest more in the projects of the company, but the Order used to waive its right of the Stock Option.”

“In reality,” he continued “it was an opportunity lost for the Recollects. Business communities were convinced that SMC was a bedrock for investments.”

But, then, again, the bedrock of the Order’s primary goal shone through, as Father Buñao himself recalled: “The Recollect’s major concern was the evangelization of the people, not the building of a business empire.”

When the last of the Mohicans “resigned” in 1979, thus ended the direct line that had linked the Recoletos with San Miguel for six decades long.