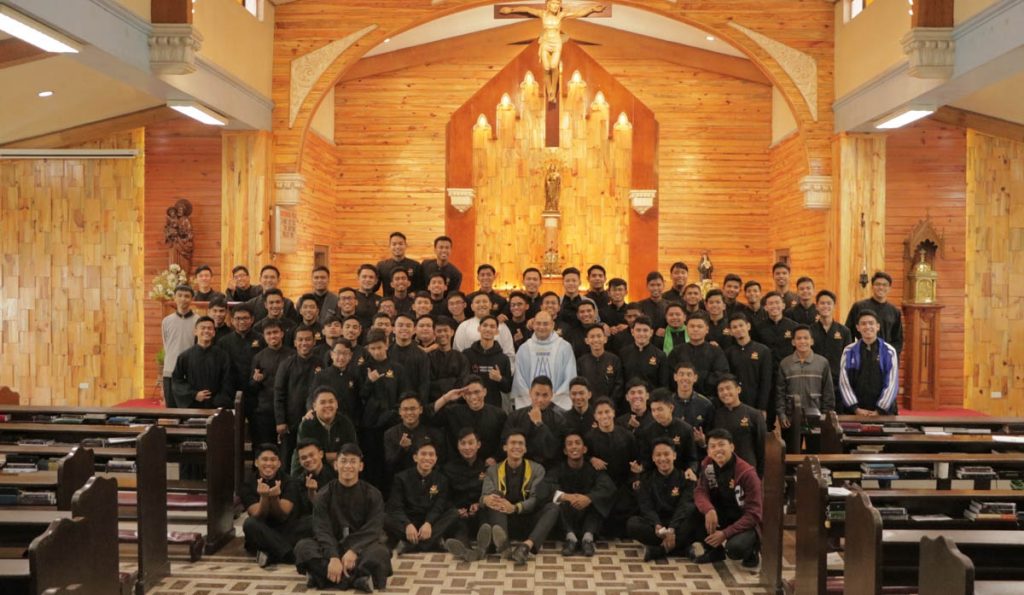 BAGUIO CITY–In order to help them prepare spiritually for the coming formation year, seminarians of Casiciaco Recoletos Seminary in Baguio City underwent a 3-day retreat which focused on human dignity, vocation and the Augustinian Recollect community and way of life.

Rome-educated Fr. Mark Rochelle Renacia, OAR, the retreat master, told seminarians gathered at the mini-theater that in order to encounter God, a true follower of Augustine must begin the search within one’s self.

“This is very Augustinian: that if you can’t find God in yourself, you can’t find Him anywhere else,” he said on the opening day of the retreat scheduled on Aug. 3-5.

The search for the divine in the self, he added, will eventually lead one to recognizing his inviolable dignity: that he, though made of clay, is a creation after the image and likeness of God, was molded by the hands of God and received life through the breath of God (cf. Gen.1:1-8).

Therefore, he continued, man is pleasing before God not because of his God-given talents, abilities and achievements, but because of who he is.

With his dignity now unassailable, man is then called to be holy as God is holy, Fr. Renacia said. To achieve this, man must faithfully respond to his call or vocation (from the Latin verb: voco, vocare, meaning “to call”) either in the religious or married life, or in single blessedness, he added.

The retreat master said one of the roots of man’s crisis in life is his failure to distinguish his vocation from his career.

While career is self-motivated and is geared toward the achievement of one’s goals and dreams in life, vocation is listening to the voice of God and doing His will in one’s life.

“Failure to respond to one’s vocation means losing one’s purpose in life,” Fr. Renacia said. “The pain could be so great that no amount of success and even riches can compensate for it.”

Though vocation is mysterious because it is unique for every person, it is not born out of God’s random whims but comes from the Divine Wisdom and should therefore be taken seriously, he said.

As a being endowed with free will, however, God allows man to say no, but also makes him understand later on that his happiness can only be found in harmony with God’s will, Fr. Renacia said.

“If we say yes to our vocation, God can transform us into a person we never imagine we can be,” he said, citing as example how the Lord transformed Peter and Paul from being a simple fisherman and a persecutor of Christians, respectively, into the very pillars of Christianity.

OAR Community: One mind and one heart intent upon God

In answering one’s calling to the religious or priestly life, Fr. Renacia insisted that one needs to belong to a community.

“On our own, we are bound to despair,” he said, citing as example Judas Iscariot who killed himself after leaving the community of the apostles.

However, one has to belong not just to any community, but to a community that brings him closer to Jesus, he said, adding that it is also there in the community that one meets the Lord.

“Thomas didn’t meet the Risen Christ when He first appeared to his disciples because he was not with the community. Only when he returned to them did he meet the Lord,” he said.

He reminded the seminarians that they are not just any seminarians; they are religious seminarians in the formation, hoping to become Augustinian Recollect religious or priests someday.

As such, they should embrace the life of poverty and the sharing of goods, practice the virtue of humility, service and obedience out of love, and cherish genuine friendship as a bond of unity, the pillars of the Augustinian community.

Though the 3-day retreat had at its core prayer and the celebration of the Eucharist, group sharings were also held after every input.

This allowed the seminarians to bond and get to know each other better, especially the neophytes who were still adjusting to seminary life.

Br. Stephen Palicdon, a neophyte seminarian, said the retreat helped him a lot as it gave him an idea of what to expect and what are expected of him as he submits himself to formation.

“I like their way of life,” he said. “More people are relying on screens rather than seeing their friends face to face. We need to be connected to each other more intimately so we could have a better future.”

Br. Venes Carmelo Banquiles, a 3rd year seminarian who is set to receive his habit in October, said the retreat was a good starter in his journey to becoming a postulant of the Order.

“As I grow in formation, more is demanded of me in being a religious, and through this retreat I recollected and there in my heart was ignited the fire that burned in the heart of St. Augustine,” he said.