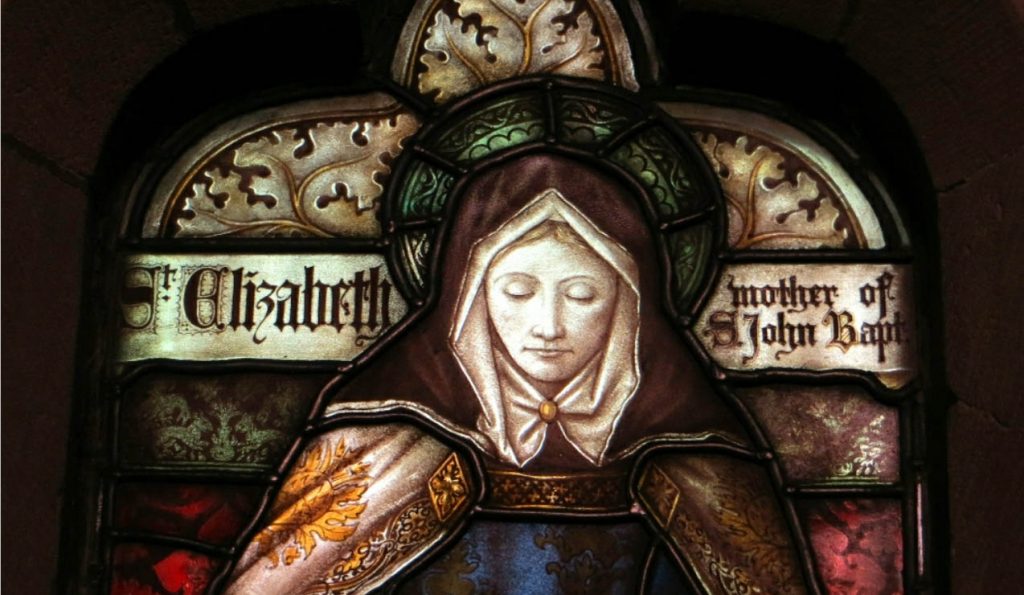 5In the days of King Herod of Judea, there was a priest named Zechariah, who belonged to the priestly order of Abijah. His wife was a descendant of Aaron, and her name was Elizabeth. 6Both of them were righteous before God, living blamelessly according to all the commandments and regulations of the Lord. 7But they had no children, because Elizabeth was barren, and both were getting on in years.

8Once when he was serving as priest before God and his section was on duty, 9he was chosen by lot, according to the custom of the priesthood, to enter the sanctuary of the Lord and offer incense. 10Now at the time of the incense offering, the whole assembly of the people was praying outside. 11Then there appeared to him an angel of the Lord, standing at the right side of the altar of incense. 12When Zechariah saw him, he was terrified; and fear overwhelmed him. 13But the angel said to him, “Do not be afraid, Zechariah, for your prayer has been heard. Your wife Elizabeth will bear you a son, and you will name him John. 14You will have joy and gladness, and many will rejoice at his birth, 15for he will be great in the sight of the Lord. He must never drink wine or strong drink; even before his birth he will be filled with the Holy Spirit. 16He will turn many of the people of Israel to the Lord their God. 17With the spirit and power of Elijah he will go before him, to turn the hearts of parents to their children, and the disobedient to the wisdom of the righteous, to make ready a people prepared for the Lord.” 18Zechariah said to the angel, “How will I know that this is so? For I am an old man, and my wife is getting on in years.” 19The angel replied, “I am Gabriel. I stand in the presence of God, and I have been sent to speak to you and to bring you this good news. 20But now, because you did not believe my words, which will be fulfilled in their time, you will become mute, unable to speak, until the day these things occur.”

21Meanwhile the people were waiting for Zechariah, and wondered at his delay in the sanctuary. 22When he did come out, he could not speak to them, and they realized that he had seen a vision in the sanctuary. He kept motioning to them and remained unable to speak. 23When his time of service was ended, he went to his home.

24After those days his wife Elizabeth conceived, and for five months she remained in seclusion. She said, 25“This is what the Lord has done for me when he looked favorably on me and took away the disgrace I have endured among my people.”

The division of the episode:
I. vv.5-7 Description of Zechariah and Elizabeth
II. vv.8-23 The Temple Ministry of Zechariah
III. vv.24-25 The pregnancy of Elizabeth the taking out of the shame before men.

Some Observations on the Text
For this third day of the Novena, let us draw lessons from the experience of Elizabeth. Although, the main character of the gospel reading is Zechariah, we reserve our reflection on his experience for another dawn mass.

Elizabeth’s Lineage
Elizabeth was no ordinary woman and wife. As to her ancestral lineage, she belongs to the tradition of a very important priestly clan of Aaron. She is married to a priest, Zechariah, whose forefather is another important personage in the history of Israel –“Abijah.” Her husband is connected to the temple liturgy and services the major temple based religious activities in Israel.

Elizabeth’s Righteouness before the Law
Again, Elizabeth is not an ordinary Jewish lady. She, in her personal life, excels in righteousness. She complements her consecrated ancestral roots by her personal sanctity. All through her life, she was righteous and was blameless before the law. Reverently, more than an ordinary Jewish lass, she painstakingly participated in most, if not all, of the liturgical life of Judaism and most especially lived out the rigors to Jewish righteousness according to the demands of the torah (v.6). Before the eyes of Yahweh and the Torah, Elizabeth was a model and a saint.

Elizabeth’s Test
However, all seems not to be so smooth and easy for this lady. Before the eyes of men, she is judged seemingly wanting and lacking in virtues. The fact that she has not conceived a child was enough proof, for the people of those times, to suspect her as religiously sloppy. Although, her barrenness was beyond her control, its cultural significance, implicating her of spiritual mediocrity, was equally not within her reach to change. And until her advanced year, she has to contend, much more on personal level, the question whether Yahweh was truly just – “Why, despite my efforts of perfect obedience to the torah, Yahweh seemed to be blind to my plight and distant from my longings? Just a child, one tiny voice in my household would be enough to silence my critics,” We would imagine her in a monologue. But this tiny voice, there was not for quite a long time.

With a little stretch of imagination, one leads to consider how hopeless was the situation of Elizabeth for a blessing i.e. the taking away of her “disgrace” before men (v.25). Nature was a bit unkind to her—she was barren; and such hopelessness was punctuated by her being advanced in years. Humanly speaking then, she seemed to be resigned to the reality that righteousness before Yahweh and the Law are no guarantee for divine blessings.

But this was not the case of Elizabeth. She was a woman who, despite the seemingly human impossible condition, never gave up with the divine; in spite of a very much delayed divine intervention, she never ran out of trust and confidence in God’s loving mercy. Elizabeth manifests the hope of a true believer who never demands and sets conditions as to how and when God is to shower his blessings and graces. She is a model of human fidelity to God despite the seemingly divine apathy and unconcern. Indeed, her persevering faith paid off. Her trust and confidence in an ultimately loving God redeemed her from the “disgrace” before men.

1. We have been conditioned to a quid pro quo attitude. We set conditions even with God. We promised to be good, to be patience and even honest only if these will be re-paid back by God with blessings at a specific time we wanted him to shower. How much we love to re-edit the song from “In his time He makes all things beautiful, in his time” to “In my time, I make all things beautiful, in my time.”

2. But the story of Elizabeth puts to test our impatience; it tells us that God is God and we are his children; it reminds us that God’s blessings are God’s blessings; and gifts, although may be requested, are never to be demanded.

3. A true believer is one who does not tempt God, but allows God to tempt him. Realizing too that with the test comes growth, maturity and finally blessings in disguise.