Our Lady of Mount Carmel and the Brown Scapular 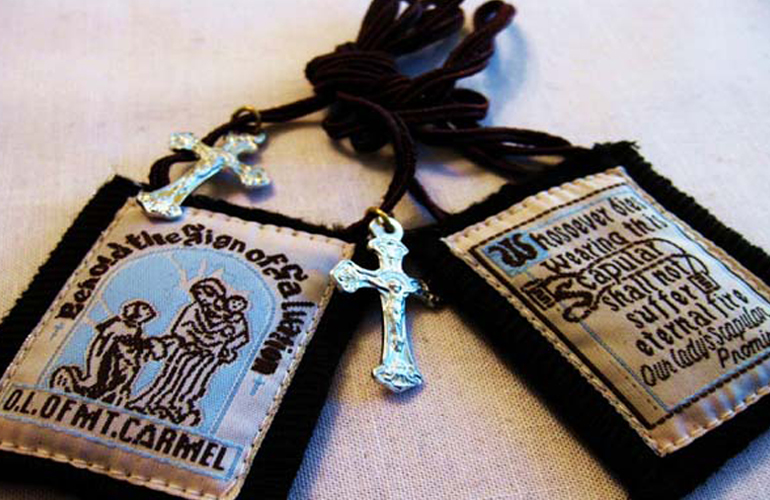 On Friday, May 4, 2018, the Catholic Church of the Philippines will celebrate an important milestone: four hundred years of Filipino devotion to Mary under the title Our Lady of Mount Carmel.

There will be a fluvial parade at the Manila Bay at 5 a.m., holy mass at the Quirino Grandstand, traslacion to her rightful shrine of San Sebastian Basilica, and re-enthronement, with organizers expecting a large throng of faithful to participate.

All these are but testimony that indeed, the Filipinos are “a people in love with Mary” (pueblo amante de Maria). In this case: the Our Lady of Mount Carmel.

Down the centuries, the Filipino devotion to Our Lady of Mount Carmel, which was first introduced by Recollect missionaries of the 17th century, has become one of the most popular and enduring, as evidenced by the seeming ubiquity of parishes and schools placed under her patronage and the widespread practice of wearing the Brown Scapular that is associated with her.

But when and where did this all begin?

Long before the Augustinian Recollect missionaries brought the first image of the Our Lady of Mount Carmel to Philippine shores on May 4, 1618, devotion to Our Lady under this title was vibrant and alive in Europe.

It was in the 1274 Council of Lyon that the Holy Mother Church formally recognized and approved the constitution of the Carmelite Order.

The Carmelites, as they are fondly called, are believed to have traced their roots to the pre-Christian era of a religious community established in Mt. Carmel in northern Israel which took the Prophet Elijah as model of monastic life.

Carmel, a mountain overlooking the Mediterranean Sea, was the site where Elijah challenged and defeated 450 prophets of Baal to a praying match to show whose God was real, winning also in the process the people to the true God (1 Kings 18:20-40).

However, there were no historical proof for the existence of the pre-Christian Carmelite community. There were 12th century records, nonetheless, attesting that there was a community of monks residing on Mount Carmel, building a monastery and a church dedicated to the Virgin Mary there.

Louis IX of France visited the monastery in 1254, and brought with him French hermits back to Paris where he built a convent for them.

This initial diffusion of the Carmelite monks proved fateful for the Order’s existence, as in 1291, Muslims took Carmel by force, burning the monastery down and killing the monks.

The Englishman St. Simon Stock (1247-1265) was recognized as the one responsible for spreading the Carmelite Order in Europe.

According to the Carmelite tradition, the Brown Scapular of Our Lady of Mount Carmel was given by the Our Lady to St. Simon Stock, who was then Father General of the Order on July 16, 1251.

“Receive, my beloved son, this habit of thy order,” the Our Lady was quoted by St. Simon Stock as saying to him, “This shall be to thee and to all Carmelites a privilege, that whosoever dies clothed in this shall never suffer eternal fire . . .”

The Sabbatine Privilege was also one reason for the widespread practice of wearing the Brown Scapular. The privilege was taken from the Apocryphal Bull “Sacratissimo uti culmine” of John XXII (pope from 1316 to his death in 1334).

The pope in the letter he issued said that the Virgin Mary appeared to him, asking him to confirm the granting of indulgence to members of the Carmelite Order and to those who wear the Brown Scapular.

“I, the Mother of Grace, shall descend on the Saturday after their death and whomsoever I shall find in Purgatory, I shall free, so that I may lead them to the holy mountain of life everlasting,” the Virgin was quoted by the pope as saying to him.

Down the ages, many saints and popes have recommended the wearing of the Brown Scapular in view of its immense spiritual merits.

Pope Pius XII (pope from 1939 to his death in 1958), endorsed the wearing of the Scapular, saying, “The Scapular is a practice of piety which by its very simplicity is suited to everyone, and has spread widely among the faithful of Christ to their spiritual profit.”

Pope Paul VI (pope from 1963 to his death in 1978), in his time, said: “Let the faithful hold in high esteem the practices and devotions to the Blessed Virgin . . . the Rosary and the Scapular of Carmel”, adding that the Scapular is “so highly recommended by our illustrious predecessors.”

But is it safe to believe that the Brown Scapular of the Our Lady of Mount Carmel is an automatic guarantee of one’s salvation?

The Holy Mother Church insists that this is not the case. Instead, wearing the Scapular is a sign of one’s decision to follow the Lord Jesus like His mother Mary, the perfect model of all the Christian disciple.

In fact, there are 3 conditions necessary for one to reap the spiritual benefits of wearing the Scapular:

1. Wear the Brown Scapular,
2. Observe chastity according to your state in life,
3. and pray the Rosary.

In the end, it is not the wearing of the Scapular that saves: it is the imitation of Mary’s humility and total obedience to the will of God in her life that one is invited to imbibe as one puts himself under the mantle of her maternal protection through the wearing of the Brown Scapular.