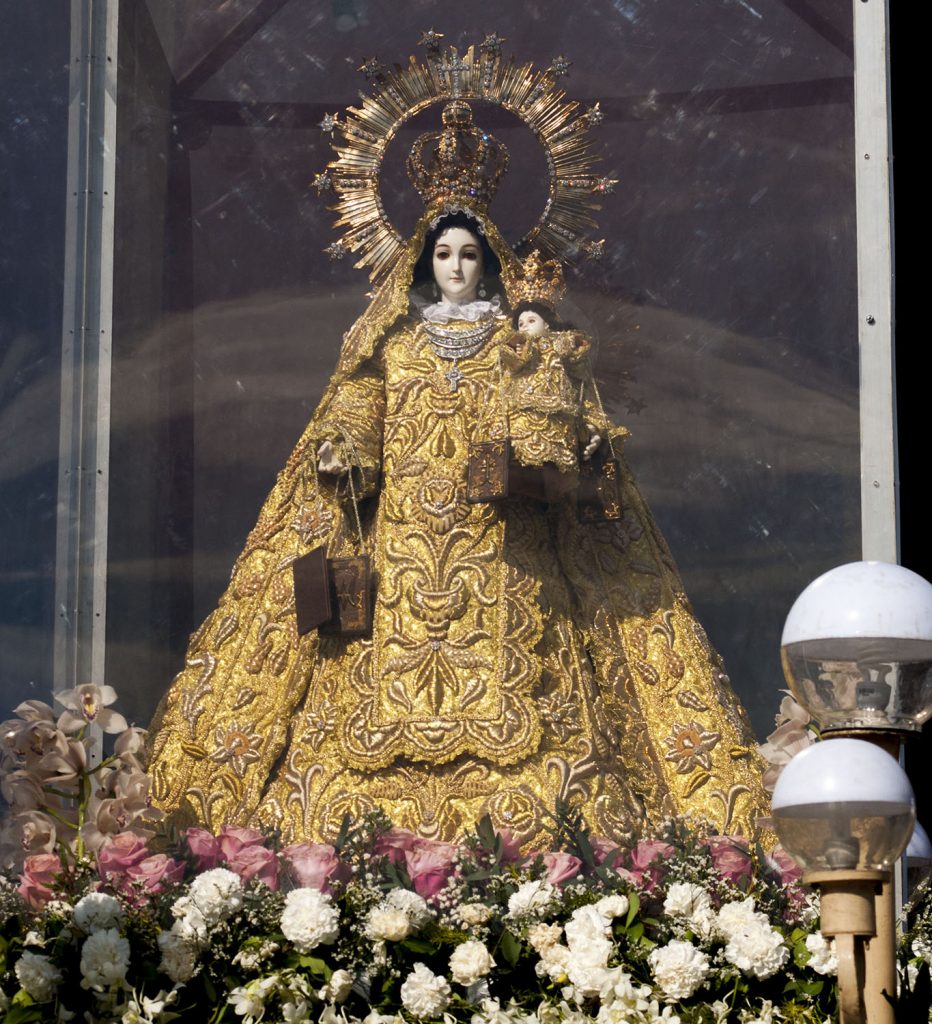 The Queen of San Sebastian Basilica — and of Quiapo — was once again re-enthroned at her rightful shrine during the closing ceremony of the 400th anniversary of the arrival of her first image to the country.

The re-enthronement of the Our Lady of Mount Carmel at the Basilica, led by parish priest Fr. Antonio “Joy” C. Zabala Jr., OAR, came at the end of a long and fruitful day for Carmel devotees who took part in the commemoration of the historic event last May 4.

The 6 p.m. mass that followed the re-enthronement was officiated by no less than the Prior Provincial Rev. Fr. Dionisio Q. Selma, OAR.

In his homily, he said: “In this centenary, we are invited to come near God through Mary. We cannot be the mother who bears Jesus in her womb, but we can bear Him in our hearts and share Jesus with others.”

The Order of Augustinian Recollects (OAR), whose missionaries were the ones who first brought the image of the Our Lady of Mount Carmel to the country on May 4, 1618, spearhead a series of religious activities to mark the quadriccentennial anniversary.

Very early that day at around 5, a fluvial procession was held at the Manila Bay, whereupon docking, the Salubong was re-enacted to dramatize the warm welcome the image received from her first native devotees.

A pontifical mass was then celebrated at the Quirino Grandstand, attended by thousands of people and officiated by the CBCP President and the Davao Archbishop Romulo Valles, with 11 other concelebrating bishops and over 60 priests.

Prayer and Contemplation: Marks of a True Carmelite Devotee

A 4-km foot procession from Intramuros going back to her shrine in San Sebastian Basilica was held which attracted more devotees, prompting authorities to close for some hours some roads which were directly affected by the procession.

The dramatic highlight of the Traslacion — a first for the Our Lady of Mount Carmel in all 400 years she has been around — was the encounter with the Black Nazarene of Quiapo, Who was brought out of His shrine to meet His Blessed Mother amidst cheers and applause from the faithful.

Unknown to many, the Black Nazarene of Quiapo was also brought to Philippine soil and given to Filipinos by Augustinian Recollect missionaries of long ago.

“Bakit magulo ang mundo? (Why is the world chaotic?),” the Prior Provincial asked in his homily.

“It is because the family no longer prays together as it ought to,” he said. The devotion to Our Lady of Mount Carmel, he said, should invite the faithful to assume a prayerful and contemplative stance before the Lord in imitation of Mary.

Carmel, he said, is always associated with prayer and contemplation. The first hermits who lived on Mount Carmel in northern Israel had the Blessed Mother as their model because she always contemplates on her son, always thinks of Jesus whatever she is doing, wherever she might be, he added.

The Prior Provincial also stressed the Church’s fervent plea to respect life in a society so enamoured by the secular throw-away culture.

“Mary is the Star of the new evangelization, she shares life because she shares Jesus,” he said. “And when we share Jesus who is the Way, Truth and Life, we do not curtail life — we do not kill — because we do not have the right to kill,” he said.

On the contrary, he said, Mary through the Church encourages the faithful to have “preferential option” for the last, least, and lost— like a real mother would.

“And we know that as Filipinos, we are sick, in many aspects, in many senses,” he said. “Kaya nga (That is why) the Blessed Mother loves us so much, and the Church wants us to do the same by extending preferential option for the poor, the uneducated and victims of oppression by the rich and powerful.”

As “pueblo amante de Maria” (people in love with Mary), he said, Filipinos are invited to imitate Mary who received Jesus more in her heart through her faith than in her womb.

The Fr. Provincial also took the opportunity to clear the air about some clarificatory questions the faithful may have had concerning the Filipino’s devotion to the Our Lady of Mount Carmel.

On the issue concerning the authority of the Augustinian Recollect Fathers of San Sebastian Basilica to impose Carmel scapulars — a right proper to the Carmelites — the Prior Provincial cited historical data.

“We are not Carmelites, we are Augustinian Recollects, but it’s clear in the records that we are the first to bring the image to the Philippines 400 years ago today,” he said.

“And records would say that the Carmel devotion spread far and wide in the country, including the imposition of the Scapular, with the permission of the superiors of the Discalced Carmelites,” he added.

It was the contemplative Discalced Carmelite nuns of Mexico City who gave as a gift the image of the Our Lady of Mount Carmel to the third batch of Augustinian Recollect missionaries, led by Fr. Rodrigo de San Miguel, who reached the Philippine soil 400 years ago.

In 1691, the Recollect Prior of San Sebastian Church was sanctioned by the Carmelite Provincial of Andalucia, Spain to bless and spread the use of scapulars because San Sebastian was the only shrine of the Our Lady of Mount Carmel back then, records show.

“So both the superiors of the two Carmelite Orders gave their permission to us, and by the time our Brother Carmelites came to the country after World War II, the devotion to the Our Lady of Mount Carmel and the Brown Scapular was already widespread,” he said.

The Prior Provincial also rebutted claims by non-believers that Marian devotion is a form of idolatry because devotees “worship” the image. He said devotees do not “worship” Mary, only venerate her, as worship is only proper to God.

He also reminded them to take advantage of the plenary indulgence granted by the Vatican’s Apostolic Penitentiary to those who joined the activities that day by going to confession, receiving communion, and praying for the intentions of the pope.

“We are gathered because we know that we really need the Lord, and a most sure way to the Lord is through Mary,” he said. “It is therefore an invitation for us to deepen our Marian spirituality, we who are known as pueblo amante de Maria.”