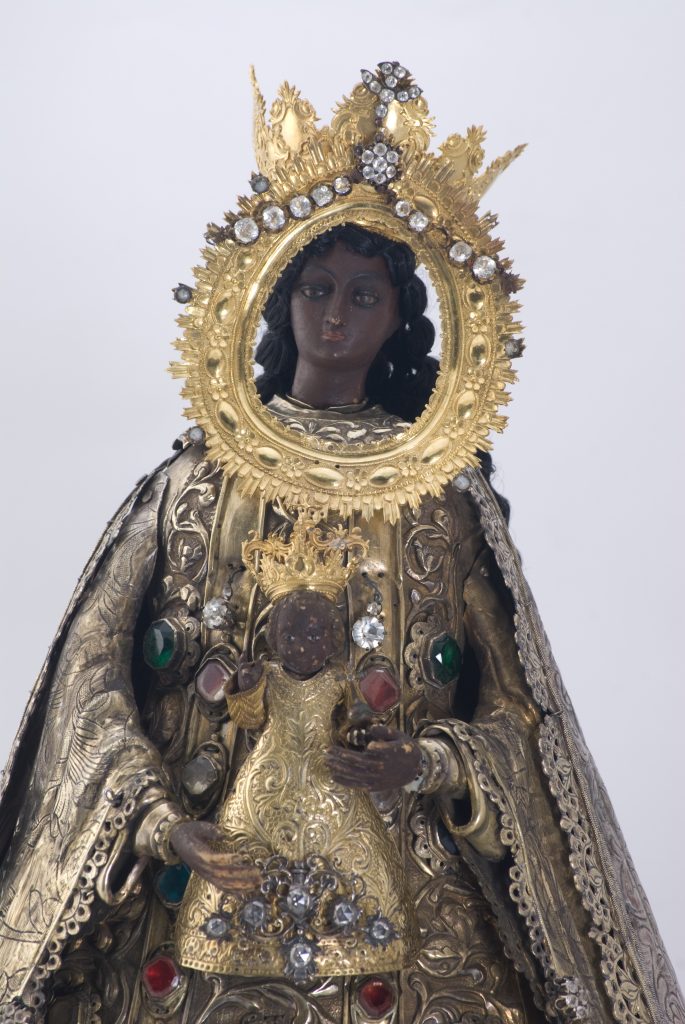 Provincial Curia, QUEZON CITY—A year ago, the Province of St. Ezekiel Moreno revived the devotion to Nuestra Señora de la Salud that was almost forgotten for more than 70 years. After a year of public veneration to the Black Virgin of Health, the devotion has brought many miracles of child bearing and cure of physical, emotional, mental, and spiritual sickness testified not only of devotees here in Luzon but also from those places where the image of La Salud was brought.

Prior to the celebration of the Mass, a solemn procession around the vicinity of the parish was done. Pilgrims from Quezon City and nearby cities and provinces also joined the procession. The vicaria of the La Salud was brought during the procession.

Moments before the start of the Mass, two traditions were revived: the placing of the veil under the hair of Mary, and the offering of the ex votos. In the book written by Fray Rommel Rubia, OAR, entitled “La Salud: The Black Virgin of Health,” the veil of the Virgin Mary was placed under her hair to signify that Mary is a special woman. The ex votos, or offerings from the devotees, were given as a sign of thanksgiving for the answered petitions. This year, Ms. Mary Cataluña, one of the Hermanas Mayores, represented the People of God in offering an 18k gold pendant as an ex voto.

Fray Dionisio Selma, OAR, Prior Provincial and the official camarero, the one who takes care of the image of La Salud, celebrated the Solemn Mass in the evening of November 17, 2018. During the introductory rite, Fray Selma said that all of us are in need of healing and we have a mother, in the person of Mary, Our Lady of Health, who always intercede for us.

During the homily, Fray Rommel Rubia, OAR, prior of Recoletos de Cavite, shared with the pilgrims the role of Mary in our life as Christians. Like any mother, the heart of Mary is filled with maternal concerns for her beloved children. He also shared in his homily the numerous miracles that were attributed to La Salud. “But all of these miracles,” said Fray Rommel, “are gifts from Jesus, who is the greatest gift that Mary, our Mother, has given us.”

A good number of Augustinian Recollect religious and priests, and two newly-ordained deacons were present during the Holy Mass. More than a thousand pilgrims and devotees also attended and were able to touch the original image of Nuestra Señora de la Salud.

Spread of the devotion to La Salud

Since the devotion to La Salud was re-introduced last year, Augustinian Recollect communities in the Philippines and even in other countries where the Province of St.Ezekiel Moreno is present celebrated the Fiesta de La Salud. In Sierra Leone, West Africa, Fray Jose Prudencio Castillo, OAR, administered the Rite of Anointing of the Sick. They even used an image of Wi Mami op Welbodi, Creole for Our Lady of Health, that was carved from wood by Fray Dominador Mercado, OAR. In Saipan, the Augustinian Recollect community also administered the Anointing of the Sick.

In Cebu, the community of University of San Jose-Recoletos and the Augustinian Recollect Sisters from Talavera House of Prayer-Recoletos celebrated the Holy Mass at Recoletos EcoPark in Brgy. Maslog, Danao City. Fray Leopoldo Estioko, OAR, prior of Recoletos de Cebu, presided the Holy Mass.

It has been a year since the devotion to La Salud was re-introduced. With the reception of the devotees of La Salud, and the response of the communities where the devotion is observed, there will be more testimonies of miraculous healing and answered prayers to be recorded.

The devotion to Mary, Our Lady of Health, that was almost forgotten for more than seventy years, is now revived and gives new hope for those who need healing of mind, body, and soul. Viva Nuestra Señora de la Salud!