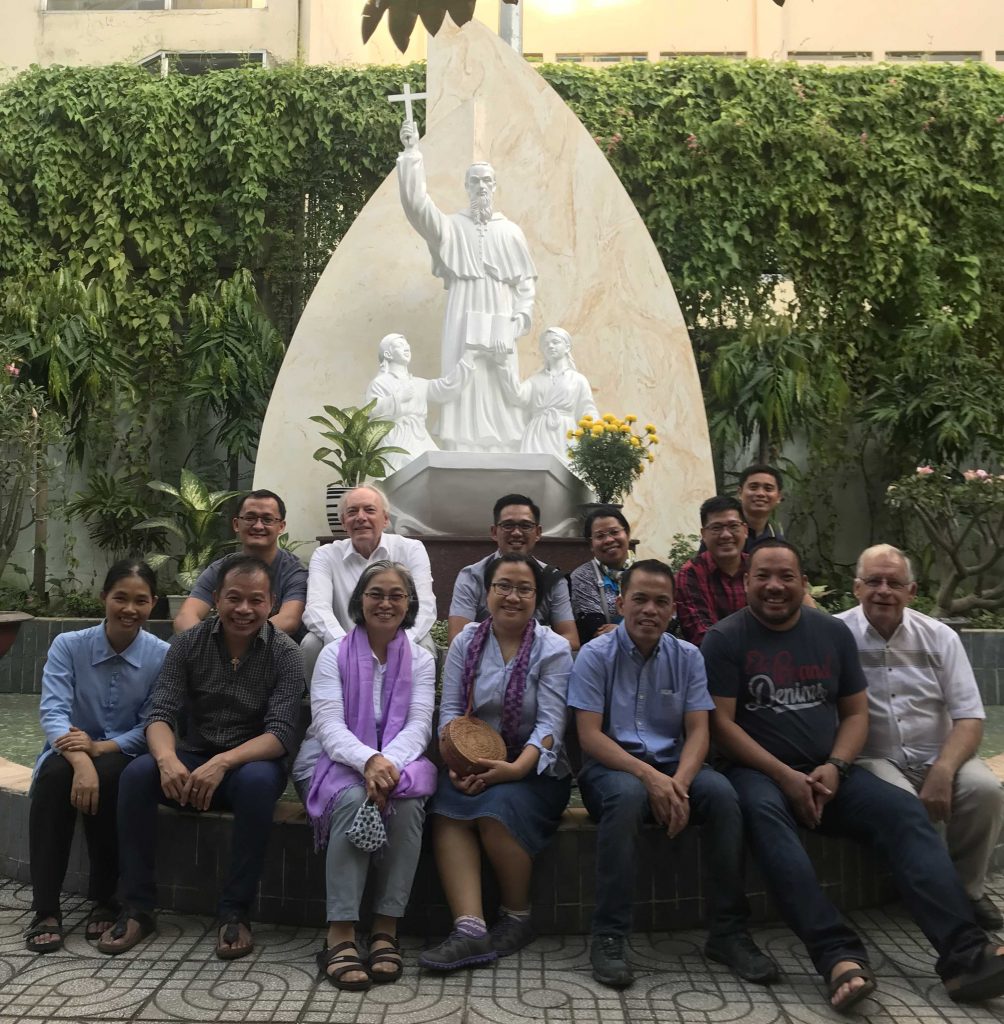 Fray Edgar Tubio, OAR, Section Head of the Ministerial and Mission Apostolates, and Fray Kenneth Joseph Onda, OAR, Master of the Professed of the Recoletos Formation Center, were delegated to represent the Recoletos in that gathering “not only of the members of the Order of St. Augustine (OSA) but also of other Augustinian congregations and orders who follow the Rule of St. Augustine.”

Currently, there are 11 countries that are members of the so-called “APAC nations”: Australia, China, India, Indonesia, Japan, Korea, New Zealand, Thailand, Tonga, Vietnam and the Philippines.

The goals of the Conference itself include: meeting the need for close communication at all levels, fostering relations and developing forms of assistance among all the members; promoting projects at regional, national and international levels; promoting vocations to the Augustinian family, better formation of candidates, ongoing formation and Augustinian spirituality; and increasing common awareness of the values, needs and aspirations of the people of Asia and of the Pacific, especially the poor and the young, and developing new models of evangelization.

The recently-concluded APAC Convention, according to Fray Tubio, “was specifically meant to assist in the discernment of establishing communities, receiving candidates, and establishing collaboration in the context of Vietnam.”

A glimpse of Church history in Vietnam

In a historical overview of the Church in Vietnam, it was presented that the 19th-century persecution of Catholics in the country, “one of only five countries in the world that is still ruled by a Communist party,” ranged between 130,000 to 300,000.  “The 117 proclaimed saints represent the many unknown martyrs.”

The end of World War II stoked the start of the decolonization movement which paved the way to the split of the country into two regions: the North and the South.

The Catholic Church in the North became the silent Church under the Iron Curtain while the one in the South enjoyed freedom in doing evangelization and charitable works such as those in the schools, orphanages, and nursing homes for the elderly.

At the end of Vietnam War on April 1975, the Church in the South suffered the same harsh policies from the State.

In 1978, the Catholic Bishops Conference of Vietnam opted for the way that best fit the people of God: “That Catholics should collaborate with the State policies in what is not against the faith, ‘living the Gospel among the beloved people of Vietnam’.” In this way, the Church was construed as renewing Herself with the Vatican’s “Gaudium et Spes” (literally, “Joy and Hope”), a Pastoral Constitution on the Church in the Modern World, promulgated in 1965.

The years from 1975 to 1990 were viewed as the 25 years of a silent Church, during which the Catholics of the North and the South “traversed the same journey of persecution: all Catholic institutes were confiscated by the State, only parish churches [and residential houses of religious] were spared.”

The year 1990 marked the dawn of “a reviving Church.” Since that year, the State has “opted to try the ‘market economy’ and relaxed some policies towards religions.”

With these, some crucial steps that were quite favorable particularly to the Catholic Church included, among others: the lifting of restrictions on priestly ordination (although not completely yet since a Police Clearance is required for ordination), and of congregations’ admission of young candidates; granting of permits for church constructions; allowing female congregations to operate Kindergarten, etc.

Beyond these figures were the observations that: “Catholic lay people still respect and revere the Church leadership and are generous to offer their contribution for the Church’s cause” and “Catholic families are still encouraging their sons and daughters to choose consecrated life or diocesan priesthood.”

Several key areas were noted as challenges in relation to religious life. From a wider perspective, there is the negative impact left behind by the indoctrination of Marxist ideology. The “dishonest environment” in which telling lies, for instance, is not considered a grave sin, affects the psychological and spiritual growth especially of the young. And there, too, is the issue of motivation, whether authentic or not, of candidates, which cannot just be known easily within a short period of interaction with them.

The country’s surging economy, moreover, is creating consumeristic mentality and comfortable lifestyle which are factors that, as in other countries, impinge on consecrated persons. The spirit of mission “intra gentes” (especially because 93% of the country’s population are non-Christians) is weak.

“Fidelity is also a challenge because it is being shaken by the fragmented and transient nature of today’s disoriented society,” added the report.

The proposal therefore was: Since “formation to fidelity to God, to the Church, to one’s own Institute… begins from the moment of the selection of candidates, there is a need to place much more emphasis on proactive personalities, with a spirit of enterprise and initiative, with the capacity to make free choices and to organize their lives around these, without external or internal constrictions.”

The need for a relevant form of discernment must take into consideration two reference points, the report said. These are: “on the one hand, a criterion about suitability shared by the team of formation personnel… and, on the other hand, the evident presence in the candidate of those qualities that foster identification with a plan of evangelical life.”

Since it is possible to make mistakes in other areas except in formation, formation then must “be focused more and more on the individual making it his own, and understood as giving greater depths to motivations, taking a personal stand regarding values and attitudes in harmony with the consecrated vocation and good accompaniment by the formation personnel.”

As to the question: “How to begin fishing for vocations in Vietnam?” several tips were shared to the Convention participants and foremost among them were: Make contacts with some Church leaders in Vietnam and know better the situation, and link with the (parish) priests or religious to assist you in initiating contacts with the locals.