Hopelessness at COP24, Failures Beyond Paris 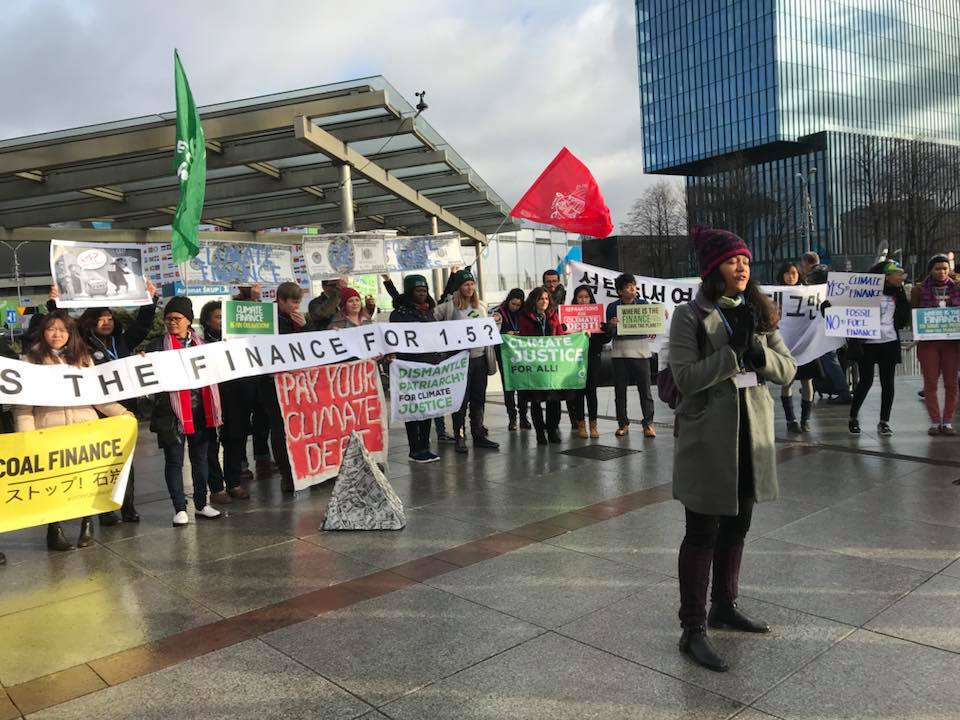 Four ‘oil giant’ countries, namely: the United States, Saudi Arabia, Russia and Kuwait objected the proposed inclusion of the UN Intergovernmental Panel on Climate Change (IPCC) report for the final document of COP24. The IPCC Report is a scientific document affirming the need to limit 1.5 degrees Celsius before 2030, avoiding the extreme climate change impacts—the more damaging droughts, extreme heat, floods, poverty and even food shortages. With the current development, we will expect catastrophic impacts in the coming years. The bullying of these countries (and their corporate backers) must end. They are delaying our actions to solve the climate crisis.

The US, Saudi Arabia, Russia and Kuwait; oil producers and suppliers of the globe, only opted to “note” the UN’s scientific report, the act of not ‘welcoming’ the report rings a wrong tune in the climate negotiations, not embracing the spirit of the Paris Agreement. Challenged-nations must consistently insist on the direction of the signed Paris Agreement, not cowed by dirty deals.

Ownership of Mother Earth, and of the Climate Negotiations

The ‘privatization’ of Mother Earth is very clear, as if major corporations or big countries or major polluters own our planet. This mirrors the halls of COP24 in Katowice; major countries are better heard than vulnerable island countries or the grassroots movements clamoring for climate justice. The suffering majority (vulnerable island communities) in many climate negotiations demand social equity with regard to accountability of climate impacts.

Polluters and corporations are using and taking advantage of COP24, in plenary assemblies, meeting, side events and backdoor negotiations—they are strategically positioning for a better ‘climate deal.’ Sponsorships, exhibits, talks, side events and sessions are mainly corporate-focused, hardly you can find peoples’ organizations, NGOs and environmental groups doing actions inside the COP24 venue, too costly for any organization to host one. So far, four days before the end of COP24, it is still ‘business-as-usual,’ and would even be more damaging if all these corporate-driven countries remain committed to profit-over-planet framework. This yearly COP meeting must avoid ‘green-washing’ across sectors, much of talks being done but lesser percentage are being done on the ground. African countries are well represented, and yet many of the extractive industries are being done in the region. Indonesia as well, grassroots actions are being solidified by NGOs; and yet much has to be done by the government in stopping the pillage of its forests by corporations. The US delegation is mixed, claiming ‘we are still in’ to counter the bad image of a climate-denier in President Donald Trump; yet on the redline of actions Native Americans are taking the lead against pipeline projects being fought across continents.

Air becomes a property right. Monopolized by corporate power, being peddled as a commodity by both local and national governments. Mountains, seas and rivers are from the beginning part of our existence, not to be owned but to be cared for. Again, corporations, and now countries are more wanting to do business with nature. This is the clamor of many indigenous communities, who usually are collaterals of ecological damage.

A collective effort composed of 330 organizations, issued a global call for climate action, thru a document called “People’s Demands,” the following, are the clear message of climate equity: ‘Keep fossil fuels in the ground; reject false solutions that are displacing real, people-first solutions to the climate crisis; advance real solutions that are just, feasible, and essential; Honor climate finance obligations to developing countries; end corporate interference in and capture of the climate talks; ensure developed countries honor their “Fair Shares” for largely fueling this crisis.’ (https://www.peoplesdemands.org) These are clear and constructive demands for climate justice and for solving the climate disruption.

Messages of actions and hopes are being amplified by The Climate Pilgrimage, as they arrived in Katowice and met with local people, leaders and communities; encouraging everyone to integrally act in solving the climate crisis. In a rare moment of encounter, the ‘climate pilgrims’ met with Patricia Espinosa, the UNFCCC Executive Secretary; she was moved by the climate-impacted stories of the pilgrims from the Philippines “we just heard the message from the pilgrims [including survivors of Typhoon Haiyan] who came to Katowice walking from the Vatican. Theirs is a message of those who are directly suffering the effects of climate change… I had a few words with them and I was struck by their message. This is really no joke. This [climate change] is about loosing your family and loosing every hope and every opportunity in your life. That’s what will happen if we say no. But if we say yes…if we choose to address climate change, we can change everything. We can build a world that is cleaner, greener and more prosperous. We can build new economies, create new jobs and live in healthier cities and communities. If we say yes, we can pass the torch of progress on to our children—a torch that is truly worthy of passing… We need you to help spread the word. To help humanity understand the importance of the choice between action and inaction—and the consequences.”

More voices must be raised from within and outside the halls of Katowice, coming from the experiences and angst of those suffering from the climate crisis—all across the globe. Voices from the ground are richer than the profit of the corporate power, we need to invest in our power to protect the planet and communities. “Defend our rights to food, land and water!”said the Asia People’s Movement on Debt and Development, the group continues to underline the said rights as corollary damages in development aggression; likewise, the impacts of climate change will be manifested heavily on food, land and water issues. Sadly during this COP24, fifteen (15) cases are recorded where activists were not allowed to enter Poland; most of them from 350.org.

Breaking the corporate power will embolden our call for fossil-fuel free future, without this we will never progress in our ‘divestment’ calls. Corporate avarice breeds in countries where corporate-centered development is bannered and infused into policy structures, and into the ‘social consciousness’ of the society.

On the margins of COP24, people still calls for “System Change, not Climate Change”of the need to break corporate power that lurks in hiding within government systems. The need to change economic relationships, where government self-interests tower beyond nature, people and communities. Our economic framework is teaching us to invest in avarice, to have more at the expense of the nature and the poor. This has to change into circular systems of sustainability—economic, environmental and social. The circularity must not be controlled by a capitalist mindset or of a profit-driven enterprise but of a well-meaning richness of shared responsibility for the common good and of the common home.

Breaking free from our false systems is an urgent task, we cannot rely anymore from our elected leaders and as manifested in this COP24, power-influencers reign supreme—oligarchs and kings alike.

The dirty energy economy must end, the just transition to renewable sources must commence. Strategic conversations are functioning on the ground, and our government systems must assume social responsibility—for the common good. Elimination of fears based on economic and corporate biases must be replaced by sound green conviction; the participatory involvement of communities, people’s organizations, business, non-government organizations and church-people is very important. If we fail this, we cannot achieve our Paris goals, our deadline is 2020; hoping that in the (future) COP26 our climate actions in the level of those who signed are done as targeted. Or else, failure to break free, will lead to catastrophic climate impacts. And as Greta Thunberg said “We have not come here to beg the world leaders to care for our future. They have ignored us in the past and they will ignore us again. We have come here to let them know that change is coming whether they like it or not. The people will rise to the challenge.”

Religious Brother of the Order of Augustinian Recollects in the Province of St. Ezekiel Moreno.