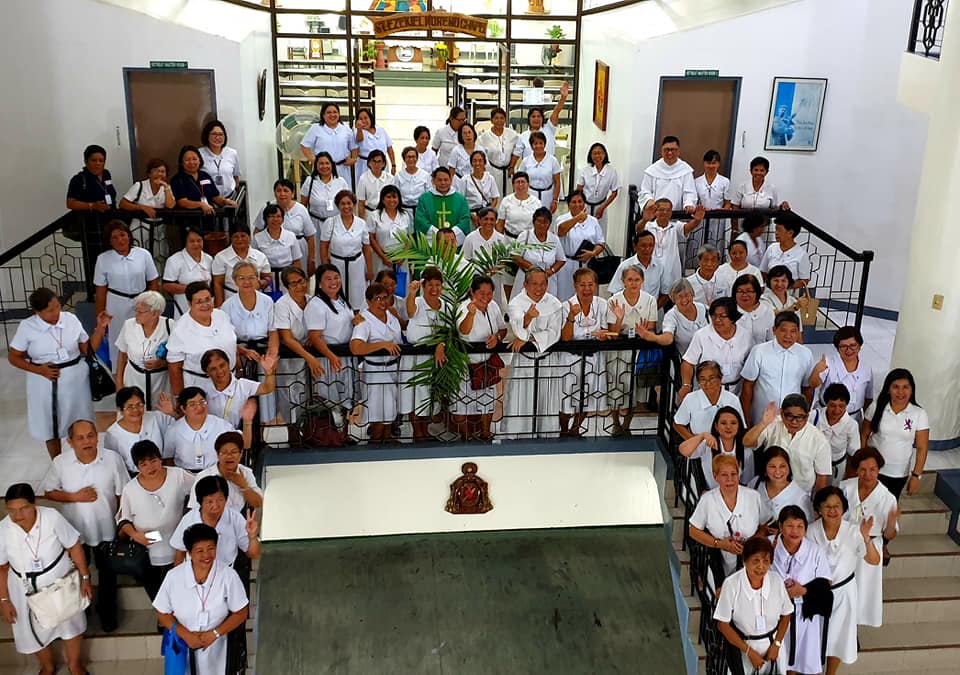 The Directory of the Province of St. Ezekiel Moreno (2018-2022) encouraged all brothers to attend with special interest to the needs of the Secular Augustinian Recollect Fraternity (cf. Const. 114); promote the alumni associations of our schools and seminaries (cf. Const. 313); and show friendliness and extend help to those who abandoned the Province, fomenting a spiritual link with them (Const. 513).

During the 2017 SARF Biennial National Convention, the following brother and sisters were elected as National Council Officers:

With the appointment of Fray Bernabe Dosdos, OAR, as Head of the Section for SARF and Spiritual Adviser of SARF National Council, he and the National Council Officers intended to visit the different SARF Local Chapters with the philosophy in mind:
1.To bring the SARF National to different Local Chapters.
2. To meet and know all members of SARF, thereby fostering unity among all.
3. To offer help to the Chapters, in terms of suggestions, recommendations, corrections, clarifications, and encouragements.

With these principles in mind, the National Council and the SARF National Spiritual Adviser, even before Fray Dosdos took the office, visited the Local Chapters in Luzon and Visayas Regions. Aside from the visits, the SARF in the Philippines joined many activities that strenghtened their bonds and their spirituality as Augustinian Recollect Tertiaries.

As the Philippine Church celebrated the 400th anniversary of the arrival of the first Carmel image in the Philippines, different SARF Chapters sent delegates to Manila to witness the Traslacion at Salubong 2018. They also attended the celebration of the Holy Sacrifice of the Mass at Quirino Grandstand that was presided by His Excellency, Most Rev. Romulo Valles, DD, Archbishop of Davao and President of the Catholic Bishops Conference of the Philippines. Thousands of devotees of Our Lady of Mt. Carmel de San Sebastian joined this momentous event.

A welcome party and birthday celebration was given to Fray Bernabe Dosdos, OAR by SARF Metro Manila Chapters on June 10, 2018.

On July 14, 2018, SARF officers visited the SARF Local Chapter of Our Lady of Peace and Good Voyage, Tondo, Manila. Fray René Paglinawan, Local Prior of Recoletos de Tondo, gave a Trial Teaching about SARF History for Trial Candidates. The National and Luzon Regional Meeting was also held on the same day.

The Secular Augustinian Recollect Fraternity-Mira-Nila Chapter celebrated its 25th founding anniversary last August 25, 2018 with Fray Lauro V. Larlar, OAR, prior of Recoletos Formation Center, as main celebrant and homilist of the Eucharistic celebration at Our Lady of Consolation Parish Church in Quezon City.

On September 4, 2018, Solemnity of Our Lady of Consolation, a Recoletos Family Day was held at the Parish of Our Lady of the Visitation in Urbiztondo, Pangasinan. Dr. Nilo Dizon gave a talk on the history and contributions of the Augustinian Recollects in Pangasinan. Most Rev. Socrates Villegas, DD, Archbishop of Lingayen-Dagupan, celebrated the Solemn Mass in honor of Our Lady of Consolation, Patroness and Mother of the Order of Augustinian Recollects. SARF members from Baguio, Cavite, Mira-Nila, Quezon City, Tondo, Antipolo, and Manila joined the celebration.

On September 28-30, 2018, the National and Local officers were gathered at San Nicolas de Tolentino Parish Pastoral Center for the revision of SARF Life and Mission Project 2019-2022. The process of revisiting and revising the SARF LAMP was facilitated by Fray Rafael Pecson, OAR, College President of SSC-R de Cavite. Fray Ian Anthony Espartero, OAR, Vicar of the Province and President of Secretariat of Spirituality and Formation, where the Section for SARF belongs, led the participants in revisiting and revising the Particular Statutes of SARF.

Another milestone in SARF Family was the celebration of the Golden Anniversary of SARF SSC-R de Cavite Chapter. It was participated by SARF members and their Spiritual Advisers from other SARF Chapter to indicate the unity among SARF Chapters. Members of SARF de Cavite who served for more than thirty years were given a Certificate of Recognition for their selfless service to the Fraternity and the Order. Former Spiritual Directors of SARF de Cavite were also recognized. Fray Dionisio Selma, OAR, Prior Provincial, gave an inspirational message to the SARF members.

The Feast of St. Magdalene of Nagasaki, Patroness of the Augustinian Recollect Tertiary was celebrated together with the annual Luzon Regional Cluster Gathering. A Solemn Mass was celebrated in honor of St. Magdalene of Nagasaki presided by Fray Dionisio Selma, OAR, Prior Provincial. Fourteen candidates were admitted for Trial Period and 17 members were accepted as full-fledged members through their pronouncement of their Promises. Afterwards, a celebration was held at St. Rita College, Manila where Fray Ian Anthony Espartero gave a talk. The revised SARF Particular Statutes was unanimously ratified by the members from Luzon Chapters. The different SARF Chapter from Luzon also showcased their talents in a program that capped the day’s activities.

The Prior Provincial, Fray Dionisio Selma, OAR, celebrated for the first time his natal day in the Provincial Curia in Quezon City. His usually celebrates his birthday at Talavera House of Prayer-Recoletos in Cebu, that coincides with the annual Spiritual Retreat. However, this year, due to the schedule of the annual retreat was a week earlier than his birthday, he celebrated it with his brothers in the curia. Members of SARF Luzon Chapters were able to join the celebration. After the celebration of the Holy Mass presided by the Provincial himself, a breakfast-cum-birthday party was held at the Provincialate convent.

To celebrate All Souls Day on November 2, 2018, the friars of the Province of St. Ezekiel Moreno, headed by the Prior Provincial, went to Himlayang Pilipino in Quezon City to offer the Holy Mass for their dead confreres. SARF members from Manila, Quezon City, Tondo, Antipolo, Mira Nila, and Cavite joined in the celebration for the dead Augustinian Recollects. Other OAR communities in Cebu, Bacolod, and Baguio also celebrated the Mass for the dead confreres in cemeteries where the body of their brothers were laid. SARF members from Cebu, Bacolod, and Baguio also joined in the celebration of their respective community.

On November 14, 2018, a birthday celebration was given to Fray Emilio Larlar, Jr., OAR, former SARF National Spiritual Adviser. Together with the friars and the family of Fray Larlar, some members of SARF also greeted and cheered the birthday celebrant.

SARF National Council sponsored the ninth day of the Novena to Nuestra Señora de la Salud at San Nicolas de Tolentino Parish, Quezon City on November 16, 2018. Fray Bernabe Dosdos, OAR, SARF National Spiritual Adviser, presided the Holy Mass in honor of Mary, Health of the Sick. After the celebration of the Holy Mass, the Rite of Annointing of the Sick followed.

To celebrate the 20th founding anniversary of the Province of St. Ezekiel Moreno, the Provincial Council and the Commission on History, Culture, and Heritage-Recoletos organized a two-day gathering of religious and SARF members on November 27-28, 2018. The SARF were invited to join the second day of the celebration where the history of the Province was discussed by Fray Emilio Edgardo Quilatan, OAR, Provincial Archivist. Also, a talk on Climate Change and Consecrated Life was given by Fr. John Leydon, MSSC. Bro. Edwin Ruiz, SAR, President of SARF National Council, gave a reaction to the talk of Fr. Leydon.

For three years, the Province of St. Ezekiel Moreno joined the Intramuros Grand Marian Procession where the original image of Nuestra Señora de la Salud was brought to the streets of Intramuros, Manila for a solemn procession. On December 2, 2018, together with more than 250 devotees, members of the SARF from Manila, Tondo, and Quezon City joined this annual celebration as preparation for the Solemnity of the Immaculate Conception, Patroness of the Philippines and namesake of the Cathedral of Manila.

The Secular Augustinian Recollect Fraternity in Talisay City, Negros Occidental celebrated its 25th founding anniversary last September 1, 2018, first day of the novena to San Nicolas de Tolentino, patron of the parish and of the city.

A two-day ARSE Retreat for SARF Visayas Chapters was given by Fray Leopoldo Estioko, OAR, and Fray Renie Villalino, OAR. This was also a timely celebration for the Annual SARF Visayas Regional Cluster Gathering. The National Council also presented to the brothers and sisters from Visayas Regional Chapter the revised SARF Particular Statutes that was unanimously ratified. Fray Dionisio Selma, OAR, also presided the closing Mass where 4 candidates were admitted to Trial Period and 2 candidates were accepted as full-fledged members of SARF. Another birthday celebration for Fray Selma was held, now with Fray Villalino, who also celebrated his birthday in the month of October.

On December 5, 2018, in celebration of the 430th anniversary of the birth of the Augustinian Recollection, OAR communities in Visayas also had their festivities and renewal of vows and promises. Each Local Chapter joined in the celebration of the Holy Mass of the OAR community where they belong. In Bacolod City, the Holy Mass was presided by Most Rev. Patricio Buzon, SDB, DD, Bishop of the Diocese of Bacolod.

* Our Lady of Peace and Good Voyage Parish, Tondo Chapter

* Parish of Our Lady of the Abandoned, Valencia, Negros Oriental Chapter