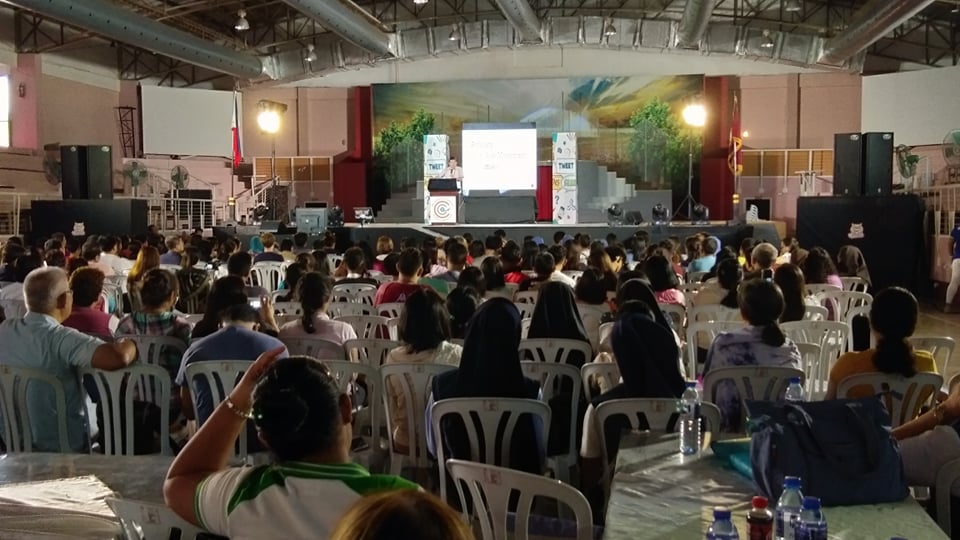 CEBU CITY—The Commission on Social Communications of the Archdiocese of Cebu organized the 1st Social Media Summit last December 15, 2018. It was participated by different organizations and parishioners, particularly by members of the Committee on Social Communications of the parishes in Cebu and other religious congregations. Three Augustinian Recollect friars, namely, Frays Virgilio Calalang, Jessriel Marcha, and Robin Ross Plata, signed up for the gathering. Members of the Religious Education Department and Campus Ministry Office of University of San Jose-Recoletos were also present in the summit. Held at the gymnasium of Cebu Institute of Technology University, the summit was graced by the speakers, namely, Fr. Jessel Gerard Gonzales, SJ, and Most Rev. Dennis Villarojo, DD, Auxiliary Bishop of Cebu Archdiocese. Atty. Maria Jane Paredes and Atty. Ian Vincent Manticajon were also invited to be the reactors of the input.

Msgr. Joseph Tan, the Media Liaison Officer of the Archdiocese, shared with the participants the rationale of the summit. Considering it as the “new Areopagus,” the social media for him was a new field where evangelization can be done. Social media contained a great potential in the promotion of the truth and the message of Christ to the world over. Because of this potential, it was of paramount importance for him and for the collaborators of the Church to use this tool wisely.

The Jesuit speaker, who is also a TV host, explained the topic “Social Media: Friend or Foe?” during the first half of the day. He illustrated that the use social media can be both a foe and a friend: a foe if it attacks the truth or a friend if it promulgates the truth. He then provided real-life evidence: disinformation which leads to what is so-called “Problematic Information,” a technical term for fake news. Furthermore, he said that there are people who manipulate the media in order to purposely disinform and deceive others. He did not fail in reminding all the participants that each one has to have personal responsibility over what each one posts. The spread of “problematic information” can be proliferated in the social media in just a matter of a minute if one does not know his or her responsibility in posting such wrong information, or worse, false accusations or claims.

Fr. Gonzales considered social media as a friend if they promote the truth. He injected this point with a little Christian theology by saying that “the truth is no other than Jesus Christ.” Hence, social media can be considered as friend if they promote Jesus Christ. Banking on the idea that each person must be responsible for what he posted in the media, he exhorted everyone to flood the internet with God and His goodness. He cited examples like posting bible verses, sharing religious practices, quotations from saints, participation in Church ministries, religious images, and faith experiences. Vocation promotion can also be catered in the social media if we can post engaging, attractive, and creative vocation campaign materials. In this way, social media can be an avenue to promote communion, goodness, informed and mature reflection, and dialogue towards actio

The two reactors, Atty. Marie Jane Paredes and Atty. Ian Vincent Manticajon, shared their insights about the topic that Fr. Gonzales discussed. Atty. Paredes added the statistics of international usage of social media where the Philippines ranked first as a country that uses social media and second as country with the highest average time spent in the internet. She also said that as of January 2018, 97% of Filipinos are into Facebook.

Atty. Paredes pointed out the mistrust of the people on mass media. Some factors were 1) the human factor behind mass media who have personal and political biases; 2) the Journalists’ little wage from media platforms; and 3) pressure from advertisers and government, especially the death of some journalists.

The second reactor, Atty. Ian Vinent Manticajon, shared the legal implications of posting anything on social media. He reiterated the contents of the Cyber Crime Law and the Anti-Bullying Law and the legal consequence of violating those laws, and one of these is libel. At the end of his reaction, he said that “we should use social media positively.”

Before lunch, an open forum was done to allow the participants ask question to the speakers and two reactors.

Spirituality in the Age of Social Media

A Josenian alumnus and Auxiliary Bishop of Cebu, Most Reverend Dennis Villarojo, DD, took the stage during the second half of the summit. He tackled the topic: “Spirituality in the Age of Social Media.” Using the temptations to Jesus in the desert as a jumping board for his talk, he pointed out three key components that form spirituality in the age of social media: nature, the self, and the idea of the good.

First Temptation: “Turn these stones into bread… man does not live on bread alone but on every word that comes from the mouth of God.”

According to the prelate, the first temptation was about the exercise of power. A subtle implication of this was compulsion: since Jesus could do it, then he must do it. Jesus, however, resisted this temptation by using restraint. Applying this to the many uses of today’s technology in general, Bishop Villarojo pointed out that technology has allowed each individual capable of doing many things, a good reason for many to use restraint. “Man has become very capable of doing many things, thanks to technology, but it does not necessarily translate to compulsion in doing them. One has to exercise restraint,” Bishop Dennis said. He elaborated this by saying that “the measure of restraint is the truth about things or the nature inherent in things. This means that one has to respect the nature of a particular thing because otherwise, one will distort or destroy himself, the thing involved, and his relationship with that same thing.”

To make his point more simple, the prelate underlined the importance of using technology in line with the intention of its invention. “It should only assist the persons who use it and should not enslave them,” Bishop Dennis took note. Applying it further to social media which gives information, communication, and entertainment, the prelate emphasized that each person’s engagement with the social media should be marked with restraint. This restraint, according to the Josenian-graduate bishop, means: “I can, but I don’t have to.”

Second Temptation: “Throw yourself in the pinnacle of the temple, for the angels of God will catch you.”

Bishop Villarojo decoded the implication of this temptation: “it is a test, a test of God’s trustworthiness in keeping His promises.” The bishop reminded the participants that if a person were to test the trustworthiness of the other, it only means that the former does not trust the latter. In this temptation, the devil attempted to implant suspicion against God in the mind of Jesus. The cleric found that this reminiscent of the event that happened before the Fall.

The serpent implanted in Eve a suspicion against God, a suspicion that God might not be their friend but an exploiter, hence, not trustworthy. It was in this regard that the speaker underlined that a person who implanted suspicion against the other has no sense of self and may have a low self-esteem. For him, today’s “selfie” culture and ranting on the social media may be masks to this low-esteem. He then said that “ranting on the social media is an indication of a person’s capacity to confront the other and that it is an immature way of seeking sympathy from other people.” In order to counter this, Bishop Villarojo exhorted the participants “to build one’s self outside the social media,” reminding them that “it is only outside the virtual world of social media that one can build the self by having real relationship with real people.”

Third Temptation: “I will give you all the kingdom of the world if you fall at my feet and do me homage.”

The prelate explained that by this temptation, the devil wanted to implant in Jesus the desire for power. He explained further that to answer this temptation, Jesus pointed out the need to identify life’s meaning that leads to the attainment of happiness.

Life’s meaning can be generated either by feelings and emotions or by reason. Bishop Villarojo underscored that the former is very fleeting while the latter lasts. The reason, according to the speaker, is “happiness, accordingly, can be generated by stimuli and feelings, but such happiness does not last for long. It lasts only as long as the feeling or stimulus lasts. On the other hand, happiness can also be generated by reason—by the contemplation of truth. And once a person contemplates on the truth, the happiness that comes with it lasts because the truth lasts. The goodness that comes from it also lasts and is not fleeting because such goodness comes from the truth.”

He adjoined this with a little reflection on the gospel narrative concerning the rich young man who asked Jesus what he should do to inherit eternal life. Bishop Villarojo explained that the rich young man identified Jesus as the good Master or the good Teacher. But the rich young man went away sad because he could not complete the demand of the teacher who he identifies as the one good master who could guide him. In other words, he went away sad because he could not become a true disciple. If a person contemplates on the truth, then he will attain the Truth who is Jesus Christ himself.

The first Social Media Summit added a whole new and fresh ideas on the proper use of the social media. It was a timely discussion on this era which finds many people immersed in the virtual world. The Church has been doing evangelization ever since. It was very timely then, for the Church to evangelize the people who are in the virtual world of social media so that the people may not lose track of their life in the real world. And more importantly, the Church has to evangelize even in the social media itself so God may become present in that virtual world so that in the end, “God may be all in all.”