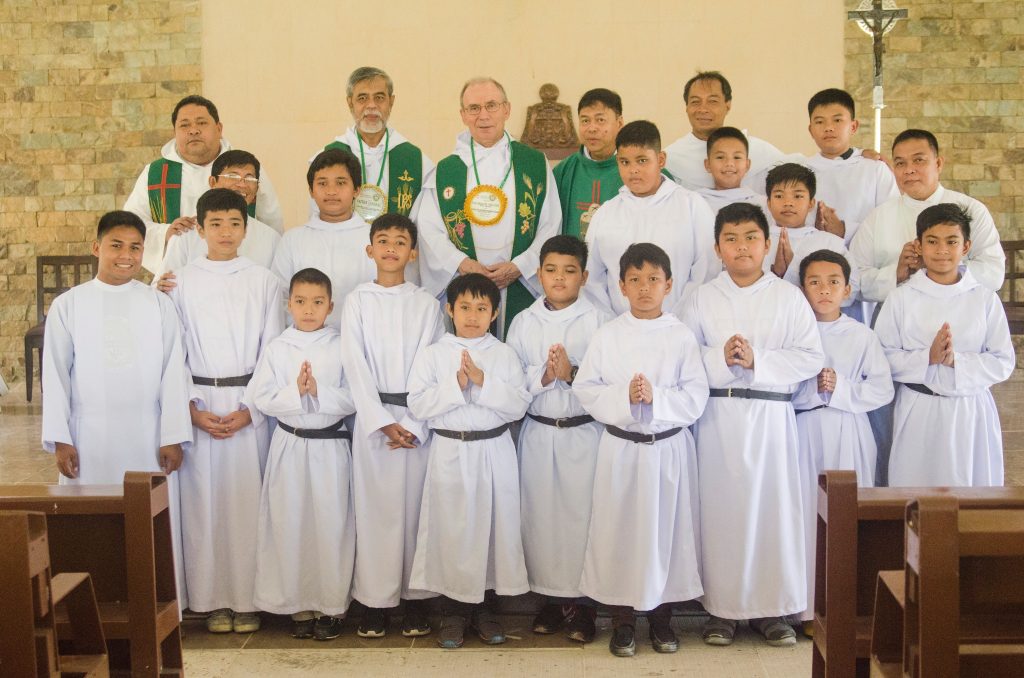 Balamban, Cebu – Fray Miguel Miró, OAR, Prior General, accompanied by Fray René F. Paglinawan, OAR arrived in Balamban, around 60 kms west of Cebu City, at 8:30 in the morning of February 17, a Sunday, for the visita de renovación.

The first schedule of the morning was the Eucharistic celebration at the school chapel, which was presided by Fray Emilio P. Jaruda, Jr., OAR, prior of the Recoletos de Balamban community. The homily was delivered by the Prior General in Spanish and was translated by Fray Paglinawan. His homily focused on the different readings, especially on the book of Jeremiah about the river that gives us abundant and green environment where we reap the fruits of the earth.

He said, “The river could be compared to Christ that gives us necessary means to live and with this water, our life is lived with meaning.” “Without water, even though we have an abundance of goods and wealth, this means nothing,” he continued.

He pointed out, from the Gospel, the theme “blessedness” which he equated to “joy and happiness.” However, this “joy and happiness” is to be found only if we are connected with Christ. He challenged the people saying that they should always be with Christ because He is in the heart of each Christian.

Before the homily ended, he mentioned the very purpose of his visit to the community and to the rest of the Recollect communities in the Philippines.

The visit of renewal started officially at 10:15 AM at the Friars’ refectory, with a song, “Come, O, Holy Spirit!” The Prior General opened the meeting with the expression of joy to be in the community of Balamban. He said he understands that, as a new community, there are some adjustments especially in the different challenges that may come and also an advantage as we are not new to religious life and not as newly-ordained priests.

He also advised the community not to replicate the life from other communities in Cebu, rather to be creative in the approach to the apostolate since we have a different context in Balamban. The Prior General reminded the brothers that in carrying out the apostolate, it should not be done of one’s own accord, but in the name of the community, or better still, for the Province of St. Ezekiel Moreno.

He urged us to work as a team, together with our lay collaborators, in the spirit of a shared mission in evangelizing the people in Balamban. There is a danger, he said, that while we do our apostolate, we act as if the work is our own and not of the community, hence, pushing ourselves to fall into a trap and putting our community in a perilous situation.

He also pointed out that our motivation of staying in Balamban is to have an encounter with Christ—but this encounter is not only for oneself, but for the whole community. We should share common motives i.e., to put Christ in our life and in our community. If, sometimes, we would find difficulties in our life because of our different perspectives, he exhorted us to see them from the perspective of faith in Christ; and, as an encounter with Christ, the community brings out the true meaning of educational apostolate.

Sometimes, he said, we deal more with the updates coming from the government agencies, or be concerned with the policies and many other education-related issues, than with our work of evangelization; yet, this could be a good opportunity for the community to grow. These government programs and demands are geared to help our educational apostolate to be more organized. But for us, to work in the educational apostolate is more than this; it does not limit us to evangelization, rather it calls us to be aligned with the Life and Mission Project (LAMP) of the Province.

The Prior General cited that the General Chapter had put a unified direction to every apostolate in the Order in order not to do it according to one’s own way – not by country, not by Province, not by the way the Superiors want it done, but in accordance with the direction set by the General Chapter.

We unified also the eight (8) Provinces into four (4), but, compared to any of these, the Province of St. Ezekiel has better hope to extend the apostolate especially to open new territories especially in Indonesia.

Revitalization is not merely on the consolidation of the Provinces but more on the effort to be creative in each Province. Father General saw a difficulty in the movement of religious personnel in the three Provinces (San Nicolas, Sto. Tomas, and Candelaria); and there are even some communities that were closed. With the movement and closure of some communities, there were so many complaints from among the religious. For this reason, there is a need to collaborate with each other.

In living out our community life, complaints from the members are inevitable. However, constant dialogue is a tool to reach out to one other. This is a common experience in the different communities. The criteria for discernment are the Gospel messages.

Going back to the General Chapter, there was also a restructuring of four (4) Secretariats into three (3). It is not so much the number as the teamwork and collaborative effort that are highly considered.

We, religious, should be mindful that we work not for profit but for the values of the Gospel. With this in view, particularly on team effort, our educational apostolate should take one direction and one design.

In the case of our community, this team effort should not be limited only to the members of the community, but must extend even as to include the lay collaborators. On this account, we need to educate our teachers by acquainting them with the Recoletos charism and its spirituality. But there might be some problems in the Recoletos educational apostolate in the Philippines in terms of the texts which are still in Spanish, and they need to be translated.

The Prior General opened also the Protocol on the Protection of Minors and Young People in our apostolate area. The year 2015 was a great debacle in our Catholic Church which affected not only the friars but also the faculty and members of the institutions. If problem exists, there should be openness so that we can do the best we can.

The Prior General cited Luis Antonio Cardinal Tagle regarding the situation in the Philippines in which cases of sexual abuse are many and that we cannot hide them. We have to investigate and prove their credibility.

After the process, we submit it to the Congregation of the Doctrine of the Faith and, once proven, the case might result to separation from the Order. One of the greatest crises in the Church is the credibility in witnessing. These protocols were formulated by the Church in order to help the victims. It is no longer about making a cover-up.

Lastly, the Prior General emphasized the situation of the Church that is watering down, and we need people who can share their gifts and talents. We need to work more for the Church especially in the Order. In an audience with Pope Francis, he reiterated that there is a need for each community to work hard on evangelization and put a good discernment in living the common life. In fact, we are called to be “creators of communion.”

After the Prior General has held an individual dialogue with each religious, the community gathered at the Chapel for the closing of the visit. The mid-afternoon prayer was said. Afterwards, the Prior General expressed his gratitude to the brothers. Then, he gave his blessing to the community. We ended up singing “Pescador de hombres”.

At around 4:15 in the afternoon, the Prior General and Fray Paglinawan left the community.

More posts about: Visit of Renewal