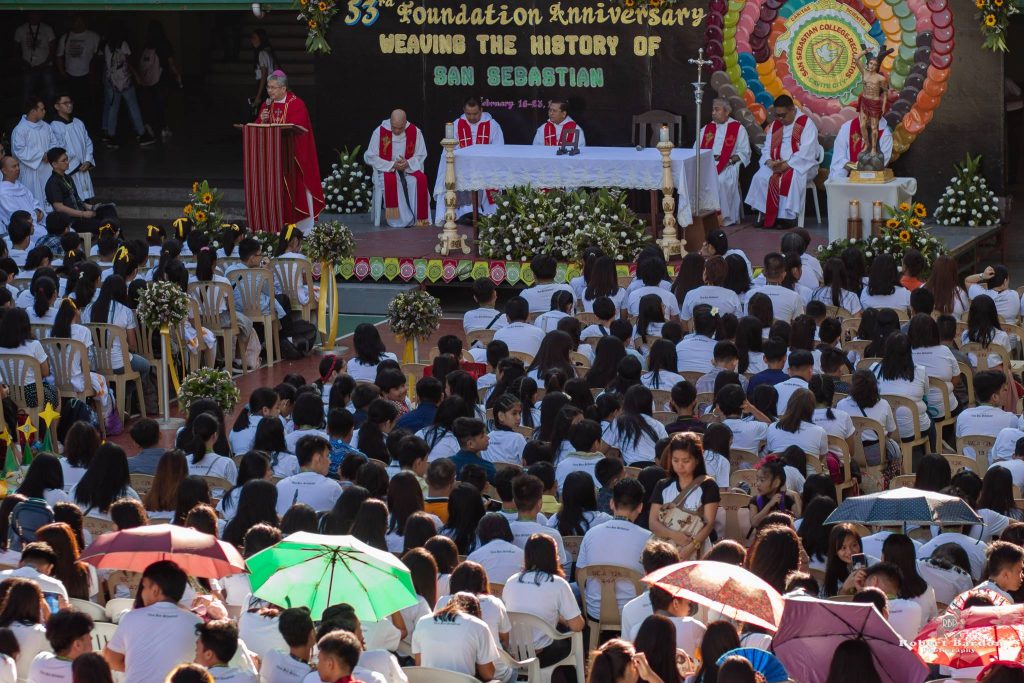 CAVITE CITY – The week-long celebration (February 18 -23) of the 53rd Foundation Anniversary of San Sebastian College-Recoletos de Cavite began with a concelebrated Holy Mass at the Main Campus chapel presided by no less than the Bishop of the Archdiocese of Imus, Reynaldo G. Evangelista, D.D. Bishop Evangelista brought back to the Sebastinian community the martyrdom of its patron, St. Sebastian, who bravely faced death in the hands of the pagan Emperor Diocletian for bringing Christ into the lives of the Romans. In keeping with the theme of the celebration, Weaving the History of San Sebastian, Bishop Rey urged the Sebastinians to be courageous witnesses of the Church and steadfast in their faith.

A parade from the Main to the Cañacao Campus followed, with the student participants literally wearing different colorful hats while the teachers and staff held hand props. The field demonstration held at the Recoletos 4th Centennial Gymnasium showcased the dancing skills of students from Basic Education to the collegiate level. Modern and Spanish dances were the features of the dance exhibitions.

Ayer, Ahora y Mañana exhibit opened at 2:00PM at the Main Campus with Rev. Fr. Rafael B. Pecson, OAR gracing the opening. Students from HUMMS 12 walked the guests through the time line of the OAR Fathers’ presence in the Philippines (1606), specifically, in Cavite City (1616), to the founding of San Sebastian Junior College (1966) to the present. The mini exhibit essays the evolution of the school from a two-storey building in a single campus to several multi-storey buildings in two big campuses. The achievements of the graduates are also featured.

One new activity included in this year’s celebration was the Christ the Light relay where the students lining up from the Main to the Cañacao Campus passed a torch symbolizing Christ’s light. The relay culminated with the Christ the Light Youth Prayer Rally. Two alumni, Ian M. Guiao and Benelita Sanchez, spoke before the crowd sharing their experience of God’s love. Mr. Guiao just graduated from college and is continuing serving the Church by training young boys to become altar servers. Sis. Bennie Sanchez of Batch 1996 has an Asian award for her humanitarian services and she has been featured in the Youtube for her activities.

A Holy Mass also ushered in Tuesday, February 19, which was dedicated to Educational Exploration (EDEX) featuring academic competitions including Mind Quest, Spelling Bee, Essay Writing, Poster Making, Picture Quest, and Student Debate. There were simultaneous contests for BED students at the Cañacao campus and SHS and college students at the Main campus. All the competitions revolved around the theme of the celebration except for the debate that had the proposition, Resolve: That the age of criminal liability be lowered to 9 years. The affirmative side eventually won the debate. A variety show, Sayawit, followed EDEX. Students, employees and faculty members gamely joined this display of Sebastinian entertainment talents.

Sports and physical challenges were featured on Wednesday, February 20. After the Holy Mass the invited team of OAR Fathers had a game of basketball versus a composite team of maintenance personnel, employees and faculty. Then, the much awaited match between the varsity team of San Sebastian College-Manila and SSC-R de Cavite followed, which was won by the former. Simultaneous with basketball, volleyball matches were also played between SSC-R de Cavite and guest teams.

The College of Criminal Justice Education (CCJE), headed by Dean Raymund Bucu, took advantage of the foundation anniversary to honor the 19 Board passers from the December PRC licensure examination with a testimonial banquet. A Holy Mass presided by the School President was said in thanksgiving for the passers Fr. Pecson challenged the new Criminologists to be Christian law enforcers as they were shaped by the institution to be such. Mr. Bucu likewise reminded the passers to always think about their Alma Mater when carrying out their duties. San Sebastian managed to obtain over 30% passing, with national standing at 70%. Hon. Dennis Bernal, City of Cavite councilor addressed the passers who came with their respective parents.

Meanwhile, on the same date, students from all levels enjoyed the Palaro ng Lahi, featuring native games and the Amazing Race for student leaders.

The theme for Day 4 was generosity, with the Holy Sacrifice of the Mass opening the day’s celebration at 8:00AM. The Recoletos Outreach Program (ReCOP) conducting a bloodletting activity, Dugo Mo, Buhay Ko, so that others may live, with students and employees as donors. Simultaneously the Amazing Race to Grace around the whole city was joined by the employees. The ultimate challenge was for each team to raise Php1000.00 to buy grocery items to be donated to the less fortunate members of the community. Right after the race, all members of the community were enjoined to showcase their talent at the Galing ng Rekoleto held at the gymnasium.  At 4:00PM members of the community lined up along Julian Felipe Boulevard, from the J. Felipe Monument to McDonald’s for the Zumbaste 2019 until 5:00PM. At 6:00PM, the very first Munting Mutya ng San Sebastian, a pageant for the Junior High School category and the Grade School category was held at the gymnasium. Jen Danielle Toribio was crowned first ever Munting Mutya Grade School with Naomie Sue Tuaño, first runner up and Kisha Cassandra Hilvano 2nd runner up. Raiza Jane Ducat was crowned Munting Muta Junior High School, with Alyssalynn Monique Ompad, 1st runner up and Janhey Belle Padriquela, 2nd runner up.

On February 22, the institutional concelebrated mass presided by Rev. Fr. Dionisio Q. Selma, OAR, Prior Provincial, was held at the gymnasium. Fr. Provincial of the Province of St. Ezekiel Moreno, stressed five points in his reflections during the homily. First, that the Church is celebrating the Feast of the Chair of St. Peter, the leader of the apostles. But at the same time, Fr. Selma said that we should recognize that the priests are sinners just as we are all sinners. Time and again, we hear priests asking all people to pray for them. Second, Fr. Selma asked everyone to pray for the Holy Father, Pope Francis, who is the successor of St. Peter. As we celebrate the foundation anniversary of the school we should think of this as Church’s success. Let us likewise learn from St. Peter to trust in the Lord. We must have faith in God and faith in ourselves. The third point, Fr. Provincial pointed the community to the Gospel of St. Matthew when Christ asked Peter, “Who do people say that I am?” In the Gospel, the Lord reminds us not to live our lives according to what the people say. We must be who we are according to what God wants. Fourth point of reflection is who is Jesus Christ for us. Jesus Christ is the Way, the Life, the Truth, a consoler and comforter, depending on one’s station in life. We must have matured developed and grow in our knowledge of Jesus. Finally, we may ask God, “Sino ako para sa iyo?” Jesus will have different answers to different people. But the common answer will be: You are loved, You are mine and You are a sinner, but I created you to be a good person.

Tribute to the OAR