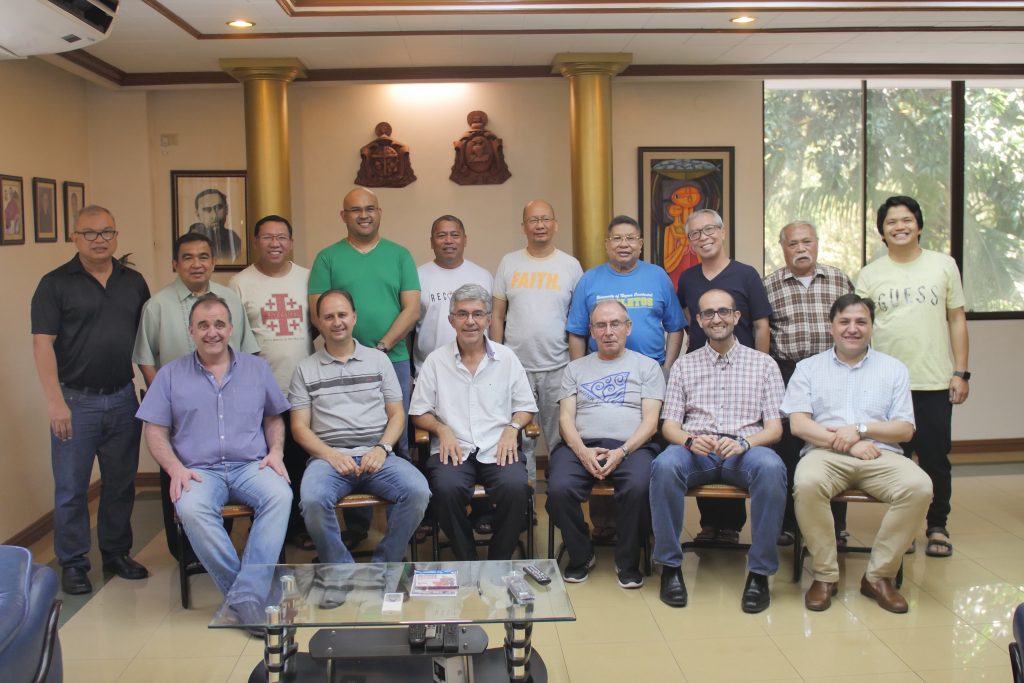 Bacolod City, NEGROS OCCIDENTAL – For the record, the last renewal visit of Fray Miguel M. Miró, OAR, Prior General of the Order of Augustinian Recollects, to the community of the University of Negros Occidental-Recoletos (UNO-R) on February 25-27, was marked by a confluence of “cosas notables” (“noteworthy events”) worth documenting for posterity.

The togetherness and the sharing of experiences of brothers from different places, not only of those from all nooks of Negros Island converging here for the Cluster assembly, but also of those practically representing the different Provinces of the Order for linkages and mobilization projects were among those memorable events that went beyond the mere category of “activities.”

Father General visited the community of Recoletos de Bacolod, together with his interpreter Fray René Paglinawan, OAR. They arrived at the convent in the morning, with Fray Joel Alve, OAR and Fr. Keneth Pahamutang, OAR as companions all the way from San Carlos City, an hour and a half away via Don Salvador Benedicto town. Towards noon, the community and the visiting friars from the General Curia and other Recollect Provinces prayed the midday prayers.

The official visit began in the afternoon at 3:30PM when Father General met the community members at the sala de recreo. The Major Superior reminded the brothers on the different points drawn from the General Chapter resolutions, official communications and updates such as, but not limited to, Zero Tolerance on the abuse of minors, and the sense of belongingness to the Order.

At 8:00 AM, Fray Dionisio Q. Selma, OAR, Prior Provincial, presided the holy mass at the Oratory of St. Nicholas of Tolentino, together with the rest of the OAR Fathers and religious coming from different communities here and abroad as concelebrants. Representatives of the UNO-R faculty and staff, student body, and some members of the Recoletos Family in Negros filled the oratory.

After which, everybody proceeded to the IS building site for the blessing and inauguration of the IS Hall dedicated to Nuestra Señora de la Salud. The blessing of the edifice was led by the Fray Provincial and the Fr. General. The inaugural program followed after the blessing wherein Fray Don Besana, OAR, the University President, welcomed everyone present. The approved resolutions on the construction of the building were read by Fray Persiuz Joseph M. Decena, the School Board Secretary, and by Fray Jose Alden B. Alipin, the Board of Trustees Secretary. Messages were also delivered by Father General, Fray Raul Buhay, Fray William Villaflor, and Fray Eduardo Celiz, Jr. Then, the historical marker was unveiled by Fray Miró and the UNO-R religious. The IS Director, Fray Decena, gave the closing remarks. Ribbon-cutting followed, led Rome-based friars and participated in by Dr. Rovic de Leon (a lay BOT member) and Engr. & Mrs. Eric Taganile (owner of the KENNETH CONSTRUCTION, which was among the building contractors). Open house took place after the ceremonies.

In the evening, the community took supper at the comedor and after which, vespers and complines followed. The end of the visita de renovación took place during vespers. Part of the rite was a brief reflection on the reading, a letter of St. Paul to the Romans (12:9-12), given by Fray Miró who, at the conclusion, thanked the UNO-R community for the hospitality and generosity.

Father General and the friars from other Provinces celebrated the 7:15 AM Holy Eucharist with the OAR Nuns at the St. Ezekiel Moreno Monastery in Tangub. After breakfast with the cloistered Sisters, the OAR Fathers proceeded to Brgy. Handumanan to have a glimpse of the area where the university frequently conducts its outreach programs in collaboration with RESOURCE-Handumanan Foundation, Inc. (“RESOURCE” stands for REcoletos Social OUtReach CEnter”.)

After lunch, Father General et al. bid adieu to the community and left for Talisay.

With additional reports from RCI

More posts about: Visit of Renewal