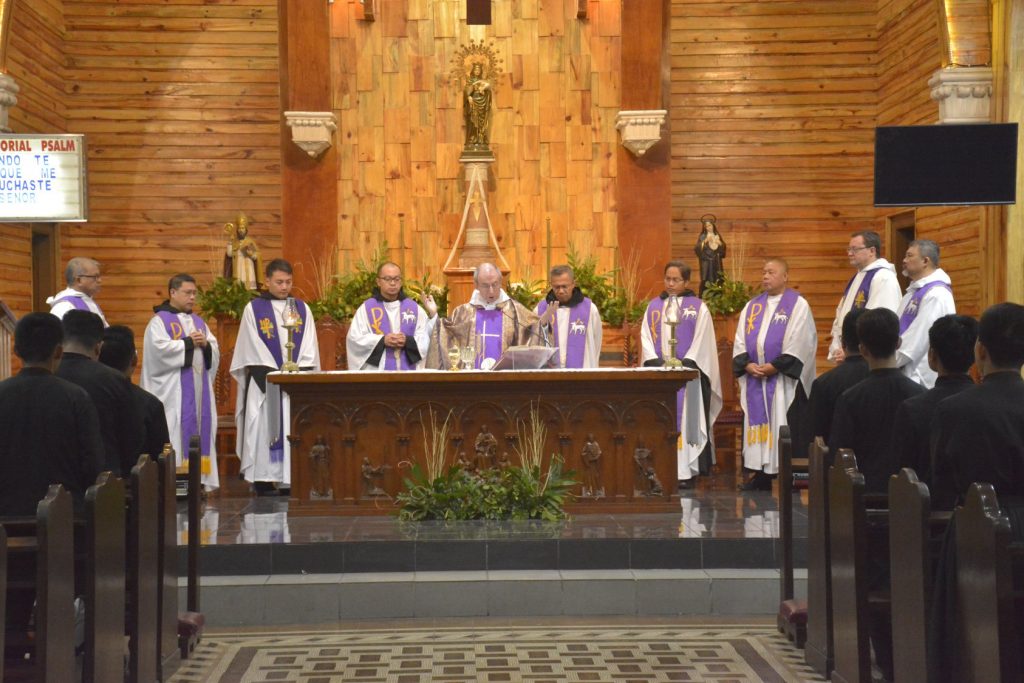 BAGUIO CITY — This city may be cold, but the Father General certainly felt the warmth of fraternal love and Filipino hospitality during his recently concluded Visit of Renewal at Casiciaco Recoletos Seminary last March 13–14, 2019.

The seminary was Fr. Miguel M. Miró, OAR’s third-to-the-last stop in his visit to all Philippine communities of the Province of St. Ezekiel Moreno. The 69-year-old leader of the Order said he was feeling the toll of constant travel as he had been to other Recollect communities located in Mindanao, Cebu, Negros and Metro Manila before coming up to Baguio.

“You have recharged me so I can go on to other communities and share with them the joy that I experience here and the love that I receive from you,” he told the community of formators and formands in his parting speech after dinner on March 14.

Number 464 of the Order’s Constitutions states that the aim of the Visit of Renewal is for the superior to know the state of the community, reaffirm more fully the religious life, charity and unity among brothers; as well as facilitate fraternal corrections whenever necessary.

Fr. Miró had been elected to a second term as Prior General during the General Chapter held in Rome in 2016. He was accompanied in his visit by two General Councilors, Fr. Francisco Javier R. Monroy, OAR and Fr. Raul M. Buhay, OAR who acted as his interpreter.

Aside from meeting the Chapter of Formation in an individual and community dialogue, the Father General also had a personal encounter with the members of the Recollect Augustinian Youth (RAY) and the Secular Augustinian Recollect Fraternity (SARF).

The seminarians had their encounter with the Father General on the morning of March 14. (Earlier that day, the Father General officiated the community mass in his native Spanish tongue in line with seminary tradition of saying the mass in Spanish on Thursdays.)

Before the conference, the seminarians were visibly thrilled at the prospect of finally meeting the leader of the Order whom they had seen only in photos until then. But contrary to their collective notion, the Father General when at last he talked with them, didn’t come across as an imposing, aloof, so-far-away-in-Rome figure.

“He is very gentle and fatherly,” said Br. Alvin Laserna after the conference. “He is a very good model of an Augustinian Recollect religious.”

Added Br. Jude Dacullo: “It is very overwhelming to meet the Father General. It inspires me to pursue my religious vocation.”

“It’s life-changing,” relayed Br. James Opu-an. “Encounter with the Prior General is like an encounter with Jesus.”

The General opened his talk with a random enumeration of the statistical condition of the Order’s seminaries across the world, though he admitted that he was only recalling the numbers from memory and were therefore inaccurate for they were strictly approximations.

While he admitted that those who are entering the seminaries are getting fewer, especially in Europe and Latin America, he said the primary concern of the Order in particular and the Church in general is giving seminarians a well-rounded and solid religious and priestly formation.

“The [decreasing] number [of those who enter the seminary] is not that important,” the Fr. General said in Spanish. “What matters is that each one of you is formed properly after the heart of the Lord.”

To achieve this end, he urged the seminarians to “establish a closer personal and communitarian relationship with Jesus.” The General also singled out fear as a factor that is detrimental to formation for it makes the seminarian secretive and not open to the formators.

“To be a religious is to love the Lord and your brothers and sisters more fully,” he said. “How can you love fully if you do not open up your heart to formation because of fear?”

The Father General related well with the seminarians as he reminisced on the days he was previously assigned as a formator in various stages of formation, from the minor seminary to theologate.

“That is why I feel at home with you here,” he said. “It makes me remember times past.”

During the question-and-answer portion of the conference, the seminarians were able to voice their concern to the Father General, from domestic issues to general problems haunting the Order and the Church.

One question raised concerns the effort the Order is doing to attract more vocations. Fr. Monroy, who is also the President of Formation and Spirituality, said they are doing “vocation animation” by conducting vocation promotions and placing the youth in mind when crafting pastoral programs.

But the Father General could only lament at the secular conditions of Europe, especially with the destruction of family and family values. He said people no longer go to Church for society offers other options. Couples also opt not to raise as much children for it is not compatible with their career advancements and could be very demanding of time and effort.

“Somehow, we are to blame,” he said regretfully. “We don’t work hard enough.”

The grim atmosphere pervading the conference room was quickly set aside when the Father General reversed the situation. Instead of answering questions, he was the one asking them.

One memorable question he threw was: if you are the Father General, what would you do to be able to relate to the youth better?

Br. Dionisio Limos, who is also the Community Beadle, responded: “To be able to establish rapport with the youth, Padre, I guess you just have to come visit us often.” To which the other seminarians chimed in: “Yeah, come home often, Padre!”

Laughing, the General answered: “I sure hope to be back. But when I do, I hope not to see you here, but in Antipolo or Mira-Nila.”

The Novitiate house of the Province is located along Sumulong Highway in Antipolo City while the Theologate is in Mira-Nila Homes, Quezon City.

Before the General was able to leave, he was inundated with requests for group and individual photos. The seminarians even solicited his signature on their breviaries and journals, to which he also obliged with customized messages which greatly delighted the seminarians.

“I might be in Rome or someplace else,” he said, “but I have confidence that people in Casiciaco are studying hard and praying hard and living harmoniously in the community, with one mind and heart intent upon God.”