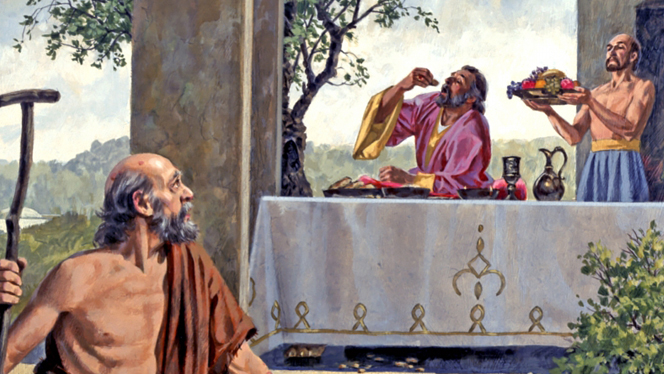 A. Invocation to the Holy Spirit

Let us invoke the Holy Spirit with the words of St. Augustine.

Come Holy Spirit, by whom every pious soul who believes in Christ in order to make himself a citizen of the City of God is made holy! (En. in Ps. 45, 8). Come Holy Spirit, grant that we may receive the promptings of God, place in us Your fire, illumine us and raise us up to God (Sermon 128, 4).

With a willing heart, and with sincerity, read slowly the following words, savoring them and allowing them to have an impact on you:

“There was a rich man* who dressed in purple garments and fine linen and dined sumptuously each day. And lying at his door was a poor man named Lazarus, covered with sores, who would gladly have eaten his fill of the scraps that fell from the rich man’s table. Dogs even used to come and lick his sores. When the poor man died, he was carried away by angels to the bosom of Abraham. The rich man also died and was buried, and from the netherworld, where he was in torment, he raised his eyes and saw Abraham far off and Lazarus at his side. And he cried out, ‘Father Abraham, have pity on me. Send Lazarus to dip the tip of his finger in water and cool my tongue, for I am suffering torment in these flames.’ Abraham replied, ‘My child, remember that you received what was good during your lifetime while Lazarus likewise received what was bad; but now he is comforted here, whereas you are tormented. Moreover, between us and you a great chasm is established to prevent anyone from crossing who might wish to go from our side to yours or from your side to ours.’ He said, ‘Then I beg you, father, send him to my father’s house, for I have five brothers, so that he may warn them, lest they too come to this place of torment.’ But Abraham replied, ‘They have Moses and the prophets. Let them listen to them.’ He said, ‘Oh no, father Abraham, but if someone from the dead goes to them, they will repent.’Then Abraham said, ‘If they will not listen to Moses and the prophets, neither will they be persuaded if someone should rise from the dead.’”

Let us meditate now with the commentary of St. Augustine on these words of the Evangelist St. Luke.

“For the rich man dressed in purple and very fine linen his pleasures had come to an end; to the poor filled wounds his miseries had ended. The former feared the last day, the latter desired it. It came for both, but both did not find it the same; and since both did not find it the same, it did not happen to both in the same way. Death is the same in one and in the other; the end of this life was a common condition for both. You heard what united them; pay attention now to what separates them: Therefore, it happened that that poor died, and he was carried by the angels to the bosom of Abraham; the rich man also died, and he was buried. Perhaps, the former was not even buried. You already knew the rest. The rich was tormented in hell, the poor rested at the bosom of Abraham. Pleasures and miseries disappeared. Everything came to an end and was changed. One passed from pleasures to torments; the other, from miseries to joys. Truly, both the pleasures and the miseries had been temporary; the miseries and the pleasures that happened to them are endless. Neither are the riches in the person of the rich condemned, nor the misery in the person of the poor praised; but in the former the impiety is condemned and in the latter the piety is praised. At times it happens that men hear these things in the Gospel, and those who have nothing are filled with joy and even the beggar rejoices at these words. “At the bosom of Abraham, he says, “I will be and not that rich”. Let us answer the poor: “You don’t have the wounds; try to gain merits; desire even the tongues of the dogs. You are proud to be poor; and I ask you if you are faithful; indeed, poverty in an unfaithful means torment here and condemnation in the future”. Let us address the rich: When you heard what is said in the Gospel about the one who was dressed in purple and fine linen and who feasted splendidly every day; were you were filled with fear; I do not disapprove that fear; but you must fear more what was disapproved there. That man despised the poor who lay at the door of his house hoping for the crumbs that fall from his table; he did not provide for him clothing, shelter, or any act of mercy. This is what is condemned in the person of the rich: cruelty, impiety, pride, arrogance, infidelity; these are the things that are punished in the person of the rich”. Someone will say to me: How do you prove that? Riches are what have been condemned precisely”. If I am not capable of proving it by using the same chapter of the Gospel, then let no one pay attention to me. When that rich man found himself in the midst of the torments of hell, he desired that a drop of water may fall from the finger of the one who had desired the crumbs from his table. Perhaps, it was easier for this latter to find crumbs than for the former the drop of water. Indeed, that drop was denied him. Abraham answered him, at whose bosom the poor man was found: Remember, son, that you received goods during your life time. What I have proposed to show is that in him impiety and infidelity are condemned and not riches nor the abundance of temporal possession. You received, he said, your goods during your life time. What does your goods mean? The others you did not consider as goods. What does during your life time mean? You did not believe that there would be another life. They are therefore, your possessions, not those of God; during your life time, and not during that of Christ. You received your goods during your life time. That in which you believed ended, and, inconsequence, you did not receive better goods, since, when you were among the inferior, you refused to believe in them.

Perhaps we are offending this rich man and we interpret in our way the bosom of Abraham. In order to say something with greater clarity, let us unwrap what was wrapped, let us enlighten what is obscure, let us open to those who call. When the help was denied him that minimum mercy for whom did not practiced mercy” (Jas 2:13); Sermon 299E, 3-4).

Let us pray now from the bottom of our heart with the text. I suggest to you the following phrases and questions that may arouse in you the dialogue with God, and, at the same time, may elicit affections and sentiments in your dialogue with God. Do not pass to the other phrase or question if you can still continue dialoging with God in some of them. It is not a matter of finishing this list, but of helping you to pray with those points that are most applicable to your personal experience:

I propose to you some points of affective inner contemplation. Once again, there is no need that you follow everything, but that you choose what is more applicable to your personal experience:

Think about everything that you can share with those who surround you of the experience that you have had of God, especially with regard to being merciful by avoiding cruelty, egoism and individualism. The following points can help you, as guide, in sharing with your community the experience of the lectio divina on this text:

“It was not poverty that brought Lazarus to the place of rest, but humility. Neither did riches separate that rich man from great rest, but pride and incredulity”. (S. 113A. 3).

Official Translator, Priest-Religious of the Order of Augustinian Recollects in the Province of St. Ezekiel Moreno.