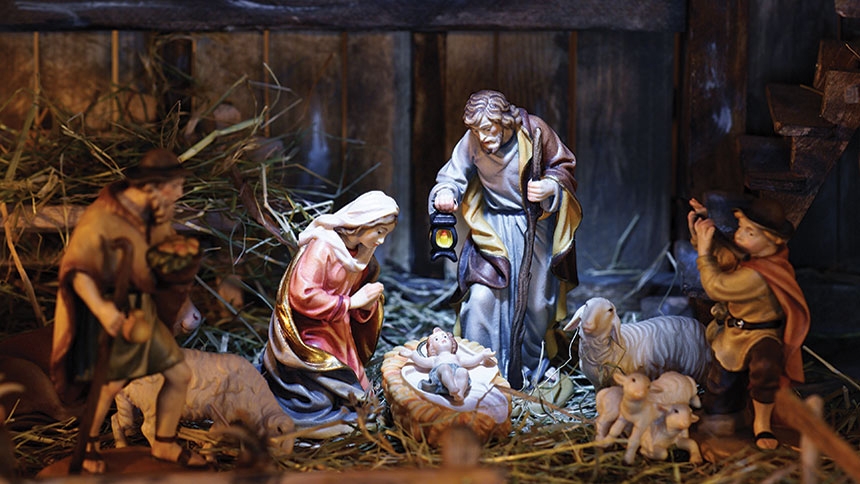 Come, Holy Spirit, by whom every devout soul, who believe in Christ, is sanctified to become a citizen of the City of God! (en. Ps. 45:8) Come, Holy spirit, grant that we receive the motions of God, put in us your flame, enlighten us and raise us up to God (s. 128,4).

With heart well disposed, with serenity, read slowly the following words savoring them and allowing yourself to be impressed by them.

In the beginning was the Word, and the Word was with God, and the Word was God. He was in the beginning with God. All things came to be through him, and without him nothing came to be. What came to be through him was life, and this life was the light of the human race; the light shines in darkness, and the darkness has not overcome it. A man named John was sent from God. He came for testimony, to testify to the light, so that all might believe through him. He was not the light, but came to testify to the light. The true light, which enlightens everyone, was coming into the world.

He was in the world, and the world came to be through him, but the world did not know him. He came to what was his own, but his own people did not accept him.

But to those who did accept him he gave power to become children of God, to those who believe in his name, who were born not by natural generation nor by human choice nor by a man’s decision but of God.

And the Word became flesh and made his dwelling among us, and we saw his glory, the glory as of the Father’s only Son, full of grace and truth.

John testifies to him and cried out saying, “This was he of whom I said, ‘The one who is coming after me ranks ahead of me because he existed before me.’” From his fullness we have all received, grace upon grace, because while the law was given through Moses, grace and truth came through Jesus Christ. No one has ever seen God. The only Son of God, who is at the Father’s bosom, has revealed him.

These, therefore, were born not by the will of the flesh nor by the choice of a man, but of God. Now then, in order that men be born of God, first God was born from them, because Christ is God, and Christ was born from men. Certainly, born of God so that through him we be made, born of woman so that through him we be re-made; on earth he sought nothing but a mother, because he already had a Father in heaven. Be not surprised, therefore, O man, that by grace you are made a son because you are born of God by his Word. The Word himself wanted first to be born of man, so that you may have the certainty to be born of God and you may say: “For a reason God wanted to be born of man, because he valued me as something to make me immortal and he to be born mortal for me.” That is why, after having said: “They are born of God” in order that we may not be astounded and horrified  by so immense a grace, that it may seem incredible for us that men be born of God, as though giving us assurance, he adds: “And the Word was made flesh and dwelt among us.” Why then are you astounded that men are born of God? Turn your gaze on God himself born of men: And the Word was made flesh and dwelt among us.”

In truth, because the Word became flesh and dwelt among us, by his birth itself he made eye drops with which to cleanse the eyes of our heart and enable us to see his majesty through his humility. For this purpose the Word became flesh and dwelt among us. He healed our eyes. And what follows? And we saw his glory. No one could see his glory if the humility of the flesh had not healed him. Why could we not see? Pay attention then, beloved, and see what I say. A kind of dust had fallen to the eye of man, soil has fallen on it. It had seriously wounded his eye, he could not see the light. Now, to this seriously wounded eye one applies an ointment. The soil had wounded it seriously and, for it to be healed, soil is sent into it, because all the eye drops and medicines are nothing, except the soil. You were blinded by dust, by the dust will you be healed; since flesh had blinded you, flesh will heal you. Actually, the soul became carnal by consenting to carnal desires; that is why the eye of the heart had been blinded. The Word became flesh: this doctor has made for you an eye drop. And since he came in such a way that the flesh extinguishes the vices of the flesh and with death kill death itself, thus it happens for you that, because the Word was made flesh, you can say: And we saw his glory. What glory? That he has become Son of Man? This is his humility, not his glory. But, up to what point was the vision of man brought, healed through the flesh? He says: We saw his glory, glory as of the only Son born of the Father, full of grace and truth…. Let this suffice and allow yourselves to be built up in Christ, be made robust in the faith, be vigilant with good works and do not depart from the ship through which you can cross the sea (Io. eu. Tr. 2, 15-16).

Think of everything that you can share with those around you about the experience you had with God, especially about the Word of God made Man. The following points can help you as guide to share with your community the experience of the lectio divina on this text:

Lord God, Father Almighty, with pure heart, as far as our littleness permits, allow us to give you our most devoted and sincere thanks, begging with all our strength from your particular goodness, that by your power you may drive away the enemy from all our thoughts and actions; that you may increase our faith, govern our mind, give us spiritual thoughts, and bring us to your happiness, through your Son Jesus Christ, our Lord, who with you lives and reigns, in the unity of the Holy Spirit, God, forever and ever. Amen (en. Ps. 150:8).