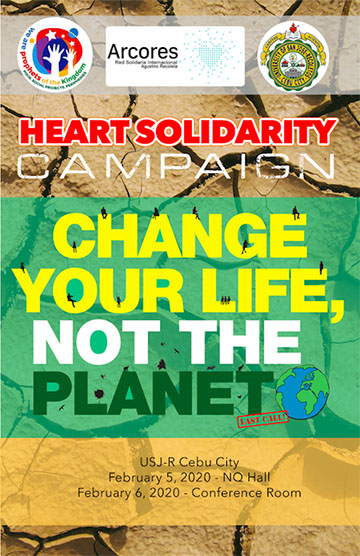 CEBU CITY–Since the official constitution of ARCORES as an international solidarity network among the Augustinian Recollects in 22 countries last year, ARCORES Filipinas has intensified its relevance and presence in the Philippines by launching the Recoletos Heart Solidarity Campaign on February 5-6, 2020. Reviving the call for preserving the integrity and care of creation, the said campaign carried the theme “Change Your Life, Not the Planet.” This initiative is also a “concrete response” of the Order of the Augustinian Recollect (OAR) to the calling of Pope Francis to take better care of the planet and the lives in it.

Three resource speakers were invited at the University of San Jose-Recoletos (USJ-R) to talk about the Philippine social realities and the responses of the Catholic Church.

Socio-ecological realities in the Philippines

In May 2019, the Climate Change Commission (CCC) under the Office of the President of the Philippines called for united action to halt the worsening state of Philippine marine ecosystems by minimizing plastic pollution.

A study was also conducted by the Ellen MacArthur Foundation, in partnership with the World Economic Forum. It predicts that by 2050, there could be more plastics than fish in the ocean (by weight). According to the report, the extensive use of plastic has increased 20 folds in the past 50 years, and it is expected to double again in the next 20 years.

This is on top of the ongoing environmental problems that the country is facing, which include air and water pollution, illegal mining and logging, deforestation, dynamite fishing, landslides, coastal erosion, wildlife extinction, loss of biodiversity, water scarcity, and many others.

One of the identified ways to address these prevailing ecological concerns is through “green living,” which is adopting a lifestyle that practices all the many ways to bring into balance the conservation and preservation of the earth’s natural resources, habitats, and biodiversity with personal and community needs. The input on Green Living was given by an award-winning environmentalist, Mr. Vermon Timbas, who is also currently serving the Philippines’ Department of Environment and Natural Resources (DENR). Green living, according to Mr. Timbas, is merely making sustainable choices on what we eat, how we travel, what we buy, and how we use and dispose of it. Green living is also about embracing “environmentalism,” a way of thinking in which people care more about the planet and the long-term survival of life on earth.

The Philippines is also one of the countries vulnerable to climate change. With this, Mr. Timbas stressed out the need to be cognizant of one’s carbon footprint and apply the practical ways to reduce it, to mitigate the imminent consequences of climate change. For better retention, he introduced the mnemonics “8R’s” which stands for “(1)refuse what you don’t need, (2) reduce what we want, (3) reuse by using reusables, (4) rot [compost] the rest, (5) recycle what you cannot refuse, reduce or reuse, (6) report environmental crimes, (7) rethink for greener option or activity, and (8) relay what you know, what you’ve learned.”

The first session ended with different groups of participants presenting their mini-project proposals that promote and apply green living, which were products of brainstorming and collaboration among their respective members.

Often referred to as the best-kept secret of Catholicism, Catholic Social Teachings (CST) are the Catholic doctrines on matters of human dignity and common good in society as prescribed in a body of official writings issued by popes, bishops, and other prominent faith leaders. Fr. Rene Cabag, CICM, who authored several papers on CST, discussed during the assembly what CST means and how to live them by. Many Catholics are unfamiliar about CST and are not fully aware that CST is an essential part of the Catholic faith; hence, the need to bring the message of CST to the Catholic faithful.

Fr. Cabag first presented the seven themes/principles
of Catholic Social Teachings: (1) life and dignity of the human person, (2) call to family, community, and participation, (3) rights and responsibilities, (4) option for the poor and the vulnerable, (5) the dignity of work and the rights of workers, (6) solidarity, and (7) care for God’s creation. He then shared real-life stories and anecdotes about the way we treat the hungry, homeless and oppressed, the role of the state and the church, the impact of social organizations, the call to care for the environment, and many more. He emphasized that our individual and collective mission must be deeply rooted in Catholic Social Teachings (CST). That contemplation must be coupled with action, that we use science and reason while we propagate our Catholic faith. The principles and themes of Catholic Social Teachings are products of practical reflection on the realities of modern life. Fr. Cabag posed some questions to ponder on: “Do our efforts change anything? How have we transformed lives? Are we really making this world better?” It is then imperative for the Catholics to know about CST, recognize the problems of the community, and act on the problems based on the principles of CST. He concluded with the message that achieving something becomes easier when there is solidarity among people. Still, solidarity will only succeed if the goal is indeed the collective dream of the people.

Living out the Laudato Si’

“Humanity still has the ability to work together in building our common home.” – Pope Francis, Laudato Si’, 13

Pope Francis’ second encyclical, “Laudato Si’,” or “Praise Be to You” is an urgent call to tackle the current ecological crisis by making a paradigm shift that will allow all human beings to live sustainably in dignity. In the said letter, the Pope calls all people of the world to take “swift and unified global action” and puts forth the question, “What kind of world do we want to leave to those who come after us?” Renowned environmentalist and leader of the Living Laudato Si’ Philippines movement, Mr. Rodney Galicha relayed this papal message to the participants. Through his unique, visually impactful presentation, he brought the participants to a little journey where everyone was made to feel the tranquility of home and realize that earth is alive, that we are all connected: “We are part of nature, included in it, and thus in constant interaction with it” (Laudato Si, 139). Economy, he explained, is derived from the Greek oikonomia: oikos (home) plus nomos (to manage or distribute), which only means that economy should have been the wise management or stewardship of our natural resources or our home, Earth. But in recent times, part of economics appears to involve the uncontrolled exploitation of natural resources. Galicha then showed emotionally striking images of how humans have hurt and destroyed earth so rapidly and also showing those who are most vulnerable as a consequence, particularly the impact of climate change. The encyclical calls Catholics to humbly listen and witness the ecological injustices that are happening today and assess how to act on them. Galicha called on everyone to change one’s lifestyle, to live in harmony, love generously, to take simple and responsible eco-actions everyday as means to care for the earth and to live simply so that we don’t take more than our fair share. Finally, he reminded us that actions must go well beyond discussion and conversations.

Greening our Schools and Parish Communities

One of the highlights of the Heart Solidarity Campaign was the presentation of the two manuals: Greening Our Parish Communities and Ecological Sustainability Guide for Educational Centers, which were painstakingly crafted and authored by the Augustinian Recollect brothers and priests.

The manuals were gracefully turned over to partner institutions, organizations, and communities under ARCORES Solidarity Network – Filipinas, with the hope that they will serve as the blueprint in the implementation of the campaign.

Synchronizing the Implementation of the Heart Solidarity Campaign

Bro. Raymund Alcedo, OAR, reiterated the purpose of the Heart Solidarity Campaign – to rediscover the profound ecological dimension of our Christian life. As proposed, this campaign will have three parts: (1) UNITE–unite in prayer, (2) CAMPAIGN – read the campaign materials and apply the eco-actions to one’s community, and (3)

SHARE – participate financially in the humanitarian projects, initiated by ARCORES. Bro. Alcedo also articulated the 4C’s that represents the four major eco-values being anchored by this campaign: (1) CARE – care for creation, (2) CONNECTEDNESS – connecting to God, others, and our home, (3) CONCRETENESS – Augustinian Recollect family’s concrete responses to UN Sustainable Development Goals, and (4) COMMITMENT – commitment to listen, discern and act for an integral solidarity as ARCORES.

The Day 2 of the Recoletos Heart Solidarity Campaign started with the Revisit of the Manual of Operation of ARCORES- FILIPINAS with the help of Dr. Joanna de Catalina, USJR INFECOP Supervisor. The manual is a product of two (2) gatherings initiated by the Commission on Social and Ecological Concerns-Recoletos (CSEC-R): 1) First Heart Solidarity Conference held on November 6-7, 2015 at Talavera House of Prayer, Quiot, Basak, Pardo, Cebu City; and the 2) First Organizational Meeting and Planning of the CSEC-R held on July 25-26, 2018 at St. Ezekiel Moreno Provincialate at Bahay Toro Ave, Project 8, Quezon City, 1106 Metro Manila. These two events were well represented by local anchors and executive members of CSEC-R/ARCORES, and outreach coordinators of Recoleto schools. The manual, especially the vision-mission part, is revisited for the purpose of assessing its relevance to the current trends and problems besetting the Philippines in particular and the world in general and to update ARCORES DIRECTION.

Rev. Fr. Vicente Cadeliña, OAR reported on the different projects funded by ARCORES International, ARCORES-Filipinas through CSEC-R, and the local Recoleto Communities. The presentation is aimed at assessing the relevance of the projects “in responding to the call of the Church to be present in the peripheries, mandated to be creators of communion and committed to a change of a lifestyle.”

The representatives of the Recoleto communities (most of them were religious) were acquainted with how a Recoletos Community in the Philippines Integrates ARCORES Volunteer Program in its mission and life. The ARCORES Volunteer Program has the following objectives: 1) to become aware of the reality of the world of poverty, to encourage the volunteer to take actions that can lead to a change of life; 2) to become agents of awareness of their family, work and friends, thus exercising a multiplier effect of social transformation; and 3) to make an effective and continuous commitment to the actions (local and/or international) carried out by ARCORES or by another entity with similar social aims.

Moreover, the interested volunteers have to comply with the requirements stipulated in the current Volunteer Law of the ARCORES International. With Rev. Fr. Rouel Sia, OAR, the congregation was made aware of the first-ever activity of the ARCORES Volunteer Program. Five lay volunteers, accompanied by one Recollect priest, came to the Philippines from Spain. It was a cultural exchange that initiated the participants to different activities like lessons in conversational Filipino and the native Casian language, how to assemble solar lamps, tree planting, and emergency response training.

The second day of the Heart Solidarity Campaign activity was closed by Rev Fr. Anthony Morillo, OAR with words of gratitude to those who brought the 2-day activity into fruition and bits of encouragement to everyone for the task ahead.