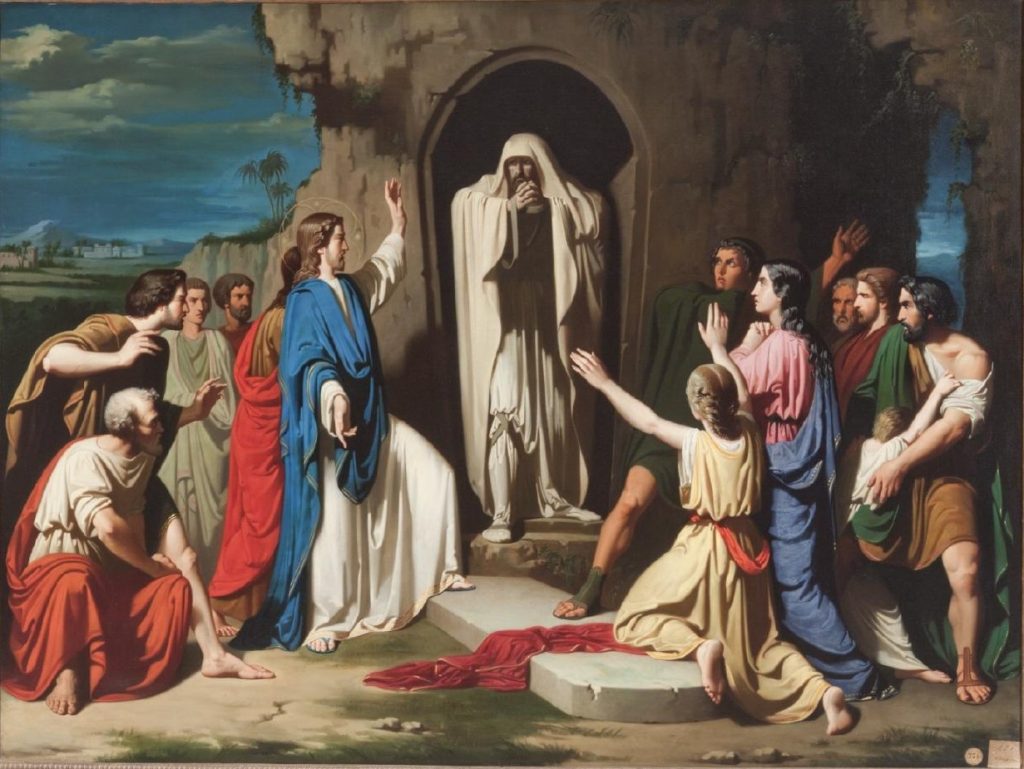 1 Now a man was ill, Lazarus from Bethany, the village of Mary and her sister Martha. 2 Mary was the one who had anointed the Lord with perfumed oil and dried his feet with her hair; it was her brother Lazarus who was ill. 3 So the sisters sent word to him, saying, “Master, the one you love is ill.” 4 When Jesus heard this he said, “This illness is not to end in death, but is for the glory of God, that the Son of God may be glorified through it.” 5 Now Jesus loved Martha and her sister and Lazarus. 6 So when he heard that he was ill, he remained for two days in the place where he was. 7 Then after this he said to his disciples, “Let us go back to Judea.” 8 The disciples said to him, “Rabbi, the Jews were just trying to stone you, and you want to go back there?” 9 Jesus answered, “Are there not twelve hours in a day? If one walks during the day, he does not stumble, because he sees the light of the world. 10 But if he walks at night, he stumbles, because the light is not in him.” 11 He said this, and then told them, “Our friend Lazarus is asleep, but I am going to awaken him.” 12 So the disciples said to him, “Master, if he is asleep, he will be saved.” 13 But Jesus was talking about his death, while they thought that he meant ordinary sleep. 14 So then Jesus said to them clearly, “Lazarus has died. 15 And I am glad for you that I was not there, that you may believe. Let us go to him.” 16 So Thomas, called Didymus, said to his fellow disciples, “Let us also go to die with him.”

17 When Jesus arrived, he found that Lazarus had already been in the tomb for four days. 18 Now Bethany was near Jerusalem, only about two miles away. 19 And many of the Jews had come to Marth and Mary to comfort them about their brother. 20 When Martha heard that Jesus was coming, she went to meet him; but Mary sat at home. 21 Martha said to Jesus, “Lord, if you had been here, my brother would not have died. 22 But even now I know that whatever you ask of God, God will give you.” 23 Jesus said to her, “Your brother will rise.” 24 Martha said to him, “I know he will rise in the resurrection on the last day.” 25 Jesus told her, “I am the resurrection and the life; whoever believes in me, even if he dies, will live, 26 and everyone who lives and believes in me will never die. Do you believe this?” 27 She said to him, “Yes, Lord, I have come to believe that you are the Messiah, he Son of God, the one who is coming into the world.”

When she had said this, she went and called her sister Mary secretly, saying, “The Teacher is here and is asking for you.” 29 As soon as she heard this, she rose quickly and went to him. 30 For Jesus had not yet come into the village, but was still where Martha had met him. 31 So when the Jews who were with her in the house comforting her saw Mary get up quickly and go out, they followed her, presuming that she was going to the tomb to weep there. 32 When Mary came to where Jesus was and saw him, she fell at his feet and said to him, “Lord. If you had been here, my brother would not have died. 33 When Jesus saw her weeping and the Jews who had come with her weeping, he became perturbed and deeply troubled. 34 and said, “Where have you laid him?” They said to him, “Sir, come and see.” 35 And Jesus wept. 36 So the Jews said, “See how he loved him.” 37 But some of them said, “Could not the one who opened the eyes of the blind man have done something so that this man would not have died?”

38 So Jesus, perturbed again, came to the tomb. It was cave, and a stone lay across it. 39 Jesus said, “Take away the stone.” Martha, the dead man’s sister, said to him, “Lord, by now there will be a stench, he has been buried for four days.” 40 Jesus said to her, “Did I not tell that if you believe you will see the glory of God?” 41 So they took away the stone. And Jesus raised his eyes and said, “Father, I thank you for hearing me. 42 I know that you always hear me, but because of the crowd here I have said this, that they may believe that you sent me.” 43 And when he had said this, he cried out in a loud voice, “Lazarus, come out.” 44 The dead man came out, tied hand and foot with burial bands, and his face was wrapped in a cloth. So Jesus said to them, “Untie him and let him go.” 45 Now many of the Jews who had come to Mary and seen what he had done began to believe in him. +

19 And many of the Jews had come to Martha and Mary to comfort them about their brother. 20 When Martha heard that Jesus was coming, she went to meet him; but Mary sat at home. 21 Martha said to Jesus, “Lord, if you had been here, my brother would not have died. 22 But even now I know that whatever you ask of God, God will give you.” She did not say: “But even at this moment I ask that you raise up my brother,” for how would she know if it was useful that his brother be raised? She only said this: ‘I know that you can, if you want you will do it, because to do it or not to do it pertains to your judgment, not to my presumption. But even now I know that God will give you whatever you ask of God (Io. eu. tr. 44,13).

41 So they took away the stone. And Jesus raised his eyes and said, “Father, I thank you for hearing me. 42 I know that you always hear me; but because of the crowd here I have said this, that they may believe that you sent me.”43 And when he had said this, he cried out in a loud voice. He bellowed, shed tears, he cried in a loud voice. How difficult it is to rise up for someone who is prostrate with bad habit! Still he rises after all: a hidden grace inside revives him; he rises up after a loud voice. What happened? 43 He cried in a loud voice: “Lazarus, come out!” And the dead man immediately came out, tied hand and feet with burial bands, and his face was wrapped in a cloth. Are you amazed at how he came out tied hand and feet, and are you not amazed that he who was buried four days is risen? In the one and the other case was the power of the Lord, not the powers of the dead. He came out, even while still tied; even still wrapped he appeared outside of the cave. What are we to understand from this? When you despise, you lie dead; if you despise the many things I have said, you lie buried; when you confess, you come out. Therefore, what is to come out but to show yourself coming out of hiding? But the fact that you confess, God does it crying out in a loud voice, that is, calling with great grace. Thus, as the dead presented himself still tied, having confessed but yet unforgiven, so that his sins will be released, the Lord said to the ministers: Untie him and let him go. What does it mean? Untie him and let him go? “Whatever you loose on earth shall be loosed in heaven” (Io. eu. tr. 49, 24).

With the text, let us now pray from the depths of our heart. I suggest the following phrases and questions that can awaken in you dialogue with God, and at the same time can give rise to affections and sentiments in your dialogue with God. Do not move to the next phrase of question if you can still continue dialoguing with God in one of them. It is not a matter of exhausting the list, but of helping you to pray with some points that better fit your personal experience.

c. Pray with this phrase: “The Teacher is here and is asking for you.”

I propose to you some points for affective interior contemplation. Once again, you need not follow all of it, rather you can choose what fits your personal experience.

b. Identify yourself with Lazarus and contemplate how your sins have taken away the life of the soul and that you need Jesus. Contemplate how they remove the tombstone where you are buried and how Jesus with his voice invites you to come out. Contemplate how the voice of Christ frees you from the chains of death, and how the disciples are those who remove the burial bands that tied you up. Contemplate the happiness of the encounter with Christ and the joy of feeling yourself freed from your sins and of being alive again in Christ. Contemplate and adore.

Think of everything that you can share with those around you about the experience you had with God, especially that Christ is the resurrection and the life. The following points can help you as guide to share with your community the experience of the lectio divina on this text.

Turning towards the Lord: Lord God, Father almighty, with pure heart, as far as our feebleness permits, allow us to give you our most devoted and sincere thanks, begging with all our strength from your particular goodness, that you deign to hear our petitions according to your good will, that by your power you may drive away the enemy from all our thoughts and actions; that you increase our faith, govern our mind, and give us spiritual thoughts and bring us to your happiness, through your Son Jesus Christ, our Lord, who with you lives and reigns, in the unity of the Holy Spirit, one God, forever and ever. Amen (en. Ps. 150:8).