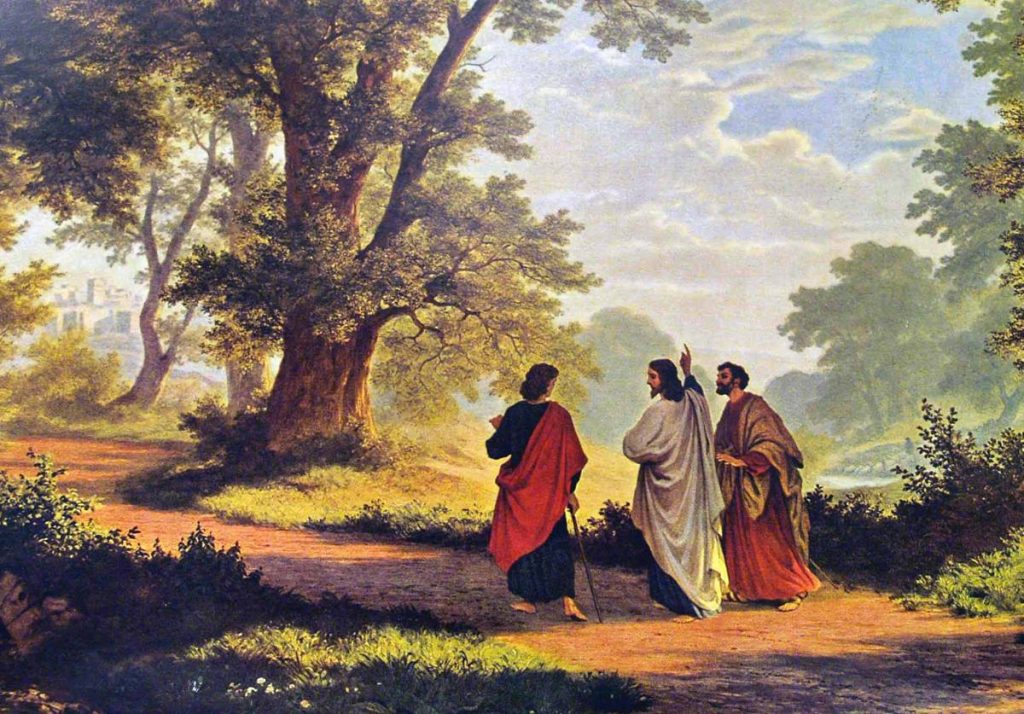 13 Now that very day two of them were going to a village seven miles from Jerusalem called Emmaus, 14 and they were conversing about all the things that had occurred. 15 And it happened that while they were conversing and debating, Jesus himself drew near and walked with them, 16 but their eyes were prevented from recognizing him. 17 He asked them, “What are you discussing as you walk along?” They stopped, looking downcast. 18 One of them, named Cleopas, said to him in reply, “Are you the only visitor to Jerusalem who does not know of the things that have taken place there in these days?” 19 And he replied to them, “What sort of things?” They said to him, “The things that happened to Jesus the Nazarene, who was a prophet mighty in deed and word before God and all the people, 20 how our chief priests and rulers both handed him over to a sentence of death and crucified him. 21 But we were hoping that he would be the one to redeem Israel; and besides all this, it is now the third day since this took place. 22 Some women from our group, however, have astounded us: they were at the tomb early in the morning 23 and did not find his body; they came back and reported that they had indeed seen a vision of angels who announced that he was alive. 24 Then some of those with us went to the tomb and found things just as the women had described, but him they did not see.” 25 And he said to them, “Oh, how foolish you are! How slow of heart to believe all that the prophets spoke! 26 Was it not necessary that the Messiah should suffer these things and enter into his glory?” 27 Then beginning with Moses and all the prophets, he interpreted to them what referred to him in all the scriptures. 28 As they approached the village to which they were going, he gave the impression that he was going on farther. 29 But they urged him, “Stay with us, for it is nearly evening and the day is almost over.” So he went in to stay with them. 30 And it happened that, while he was with them at table, he took bread, and said the blessing, broke it, and gave it to them. 31 With that their eyes were opened and they recognized him, but he vanished from their sight. 32 Then they said to each other, “Were not our hearts burning within us while he spoke to us on the way and opened the scriptures to us?”33 So they set out at once and returned to Jerusalem where they found gathered together the eleven and those with them 34 who were saying, “The Lord has truly been raised and has appeared to Simon!” 35 Then the two recounted what had taken place on the way and how he was made known to them in the breaking of the bread.

“Jesus appeared to them. They saw him with the eyes but they did not recognize him. The Master was walking with them along the ways, and he himself was The Way. Those disciples were not yet walking along The Way, because he found them outside of him. Being with them before the Passion, he had predicted everything: that he had to suffer the Passion, that he had to die and on the third day he would rise. He had predicted everything, but his death erased it from their memory. When they saw him hanging on the cross they became so confused that they forgot everything he had taught them; the resurrection did not come to mind nor did they remember his promises. They said, “We were hoping that he would redeem Israel.” You were hoping for it, oh disciples! Is it because you no longer hope? See that Christ lives: Has hope died in you? Certainly, Christ lives. Christ, alive, finds the hearts of his disciples dead; he appeared to their eyes and yet he was not revealed. They were seeing him and yet he remained hidden from them. Therefore, if they were not seeing him, how did they hear him when he was asking, and how did they respond to him? He was going with them as companion on the way and yet he himself was the guide. Without doubt they were seeing him, but they did not recognize him. Their eyes –we hear- were incapable of recognizing him. They were not incapable to see him, but were incapable to recognize him.

Attention, my brothers: where did the Lord want them to recognize him? In the breaking of the Bread. Let there be no doubt: we break the bread and we recognize the Lord. Thinking about us, who would not see him in the flesh, but who would eat his flesh, he did not want us to recognize him except there. The breaking of the bread is cause for comfort for every faithful, whoever he may be, whoever you may be who carries the name ‘Christian’ if you do not bear that name in vain; you who enter the temple but for a reason; you who listen to the Word of God with fear and hope. The absence of the Lord is not absence. Have faith and he whom you do not see is there with you. When the Lord was speaking with them, those disciples did not have faith, since they did not believe that he had risen, nor did they have hope that he could do so. They had lost the faith and the hope. They being dead, they were walking with the one alive; the dead were walking with life itself. Life was walking with them, yet in their hearts life was not yet residing. Therefore, you also if you want to possess life, do what they did to also recognize the Lord. They offered him hospitality. The Lord seemed to go farther, but they retained him. When they arrived at the place where they were going, they said; “Stay here with us, because the days is almost over. Give him hospitality, if you want to know him as Savior. Hospitality gave back to them what disbelief had taken away. Thus, the Lord reveled himself at the breaking of the bread. Learn where to seek the Lord, where to possess him, where to recognize him: when you receive him in Holy Communion. The believers know something, and they understand it in this reading better than those who do not know him.

They recognized the Lord and once they recognized him, he disappeared completely. He separated physically from them at the same time that they held him by faith. See the reason for which our Lord separated bodily from the whole Church and ascended to heaven: to build up faith. If you recognize nothing but what you see, where is faith? But if you believe even what you do not see, when you see it, you will be filled with joy. Faith is built up, because afterwards it will be rewarded with vision. What we do not see, will come, brothers, it will come. Pay attention to how it will find you. The moment will also arrive when men will ask: “Where? When? How will it be?” “When will it happen?”  “When will he come?” You can be sure that he will come. He will come even if you do not want it. Woe to those who did not believe in him! What a joy for those who believed in him. The faithful shall be filled with joy! The unbelievers will be filled with confusion! The faithful will exclaim: “We thank you, Lord; what we heard was true, what we believed was true, what we hoped for was true, what we now see is true” (s. 235, 2,3,4).

b. “Were not our hearts burning within us while he was speaking to us on the road and explaining the Scriptures to us?” (Lk. 24:32).

c. Pray with the phrase: “Stay with us, Lord, for the day is declining.”

I propose to you some points for affective interior contemplation. Once again, you need not follow all of it, rather you can choose what fits your personal experience.

Think of everything that you can share with those around you about the experience you had with God, especially about recognizing and loving Christ. The following points can help you as guide to share with your community the experience of the lectio divina on this text.

Turning towards the Lord: Lord God, Father Almighty, with pure heart, as far as our feebleness permits, allow us to give you our most devoted and sincere thanks, begging with all our strength from your particular goodness, that you deign to hear our petitions according to your good will, that by your power you may drive away the enemy from all our thoughts and actions; that you increase our faith, govern our mind, and give us spiritual thoughts and bring us to your happiness through your Son Jesus Christ, our Lord, who with you lives and reigns, in the unity of the Holy Spirit, one God, forever and ever. Amen  (en. Ps. 150:8).

“The disciples of Emmaus were walking along the way, and the Way went with them, and nevertheless, they did not recognize the Way. The Way was asking them questions along the way…” (s. 111, 2).