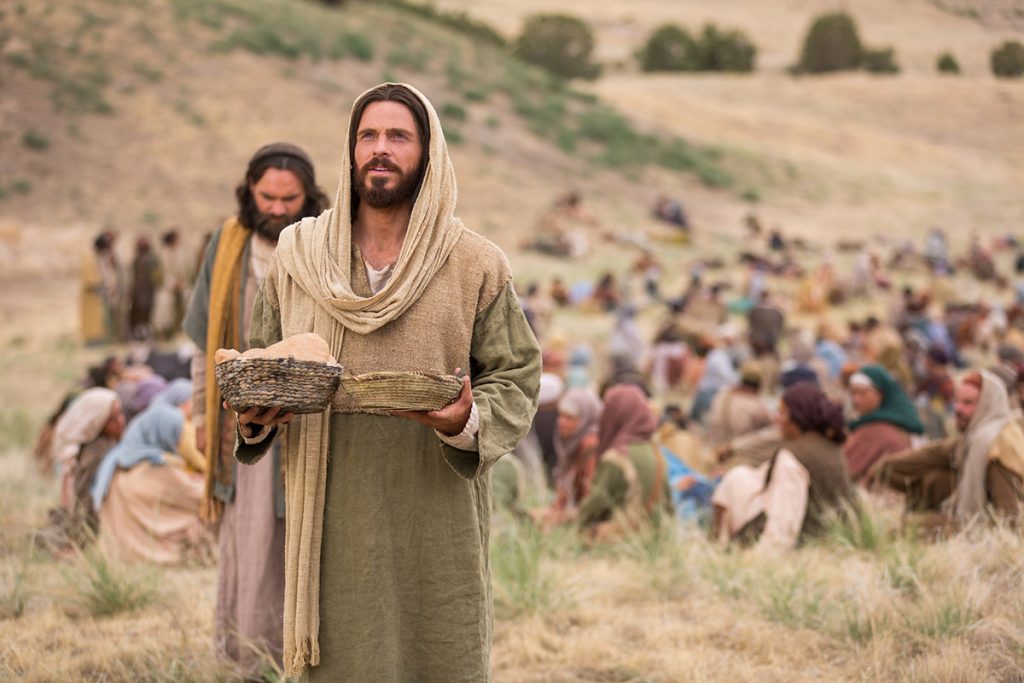 Come, Holy Spirit, by whom every devout soul, who believes in Christ, is sanctified to become a citizen of the City of God! (en. Ps 45:8) Come, Holy Spirit, grant that we receive the motions of God, put in us your flame, enlighten us and raise us up to God. (s. 128,4) Amen.

When Jesus heard of it (death of John the Baptist), he withdrew in a boat to a deserted place by himself. The crowds heard of this and followed him on foot from their towns. When he disembarked and saw the vast crowd, his heart was moved with pity for them, and cured their sick. When it was evening, the disciples approached him and said, “This is a deserted place and it is already late; dismiss the crowd so that they can go to the villages and buy food for themselves.” [Jesus] said to them, “There is no need for them to go away; give them some food yourselves.” But they said to him, “Five loaves and two fish are all we have here.”  then he said, “Bring them here to me.” and he ordered the crowds to sit down on the grass. Taking the five loaves and the two fish, and looking up to heaven, he said the blessing, broke the loaves, and gave them to the disciples, who in turn gave them to the crowds. They all ate and were satisfied, and they picked up the fragments left over –twelve wicker baskets full. Those who ate were about five thousand men, not counting women and children.

“And why, in all truth, does the Apostle say: Before faith would arrive, we were under the guardianship of the Law, the Lord also seem to signify that, when he says about those he was about to feed with five loaves: There is no need for them to go away; give them some food yourselves.” By these words they were figuratively retained in custody, since the disciples had suggested to dismiss them. As regards the multitude fed with seven loaves, he spontaneously said that he felt pity, because it was already the third day that they were fasting with him. Actually, in the history of the human race, it is in the third epoch when the grace of the Christian faith was given. The first epoch was that which preceded the Law; the second was under the Law, and the third was under grace. And because the fourth still remains, in which we have to arrive at the very perfect peace of the heavenly Jerusalem, to which everyone who rightly believes in Christ tends, that is why the Lord says that he will feed that multitude so that they may not faint along the way. This is the economy for which the Lord deigned to appear among us in temporal and visible humanity, and gave us as pledge the Holy Spirit. By his sevenfold action we will be vivified, adding the flavor like some fish with the apostolic authority. Consequently, that economy, for what other work is it except that we should be able to arrive without fainting to the reward of our supreme vocation? Because we walk by faith, not by sight (qu. 61,7).

St. Augustine interprets the two fish the following way: “As regards the two fish, that add to the bread a smooth flavor, seem to signify the two authorities that was governing that people in order that by their means it may accept the direction of its counsels, that is, the royal and the priestly, to which also belong that holy anointing. Its office was never to be demolished nor corroded by the storms and popular agitations, to break many times the violent confrontations of the mob like hostile waves, give way sometimes without compromising, in short, to struggle with a violent government of the people as the fish do in a stormy sea.

Those two authorities, however, prefigured our Lord. Because only he assumed the two, and only he, not in figure but in reality, gave them fulfillment. First, Jesus Christ is our King, who gave us example of how to fight and conquer, on taking our sins upon his mortal flesh, resisting the temptations of the enemy, both the seductive and the intimidating, upon presenting his flesh to bravely disarm the principalities and the powers and to triumph over them in his person. In this way, with him as guide we are freed from the loads and the works of this our pilgrimage as those who were in Egypt, and the sins that pursue us are buried by the sacrament of baptism, while we ourselves escape. And while we live with the hope of possessing what we do not yet see, we travel as pilgrims like them through the desert, consoling ourselves in the Sacred Scriptures of God’s Word, as to them the manna came down from heaven. And with himself as our guide we hope to be introduced into the heavenly Jerusalem, as they were into the promised land, and there, to be guarded by him as King and Shepherd. In this way, our Lord Jesus Christ is proclaimed Our King.

He is also our eternal Priest according to the Order of Melchizedek, who offered himself as holocaust for our sins, and commanded us to celebrate anew his sacrifice in memory of his Passion, in such a way that what Melchizedek offered to God, we now see offered in Christ’s Church throughout the world” (qu. 61, 2).

b. “They all ate and were satisfied and they collected twelve baskets full of fragments left over” (Mt. 14:20).

c. Pray with this phrase: “Lord, I put all that I am and have in your hands.”

a. Contemplate how Christ takes the five loaves and the two fish, and how the disciples distribute  the food to all the persons. Contemplate the amazement of the disciples, so too the surprise and the happiness of the people seeing the food. Allow yourself to be amazed in contemplation, and adore.

Think of everything that you can share with those around you about the experience you had with God, especially about putting everything in the hands of Christ so that he be the one to perform the miracle. The following points can help you to share with your community the experience of the lectio divina on this text.

Turning towards the Lord: Lord God, Father Almighty, with pure heart, as far as our littleness permit, allow us to give you our most devoted and sincere thanks, begging with all our strength from your particular goodness, that you deign to hear our petitions according to your good will, that by your power you may drive away the enemy from all our thoughts and actions; that you increase our faith, govern our mind and give us spiritual thoughts and bring us to your happiness through your Son Jesus Christ, our Lord, who with you lives and reigns in the unity of the Holy Spirit, one God, forever and ever. Amen (en. Ps. 150:8).

“The bread that for us descended from heaven, how he will satisfy us in our homeland who has nourished us in this way during our pilgrimage!” (en. Ps. 147:2).