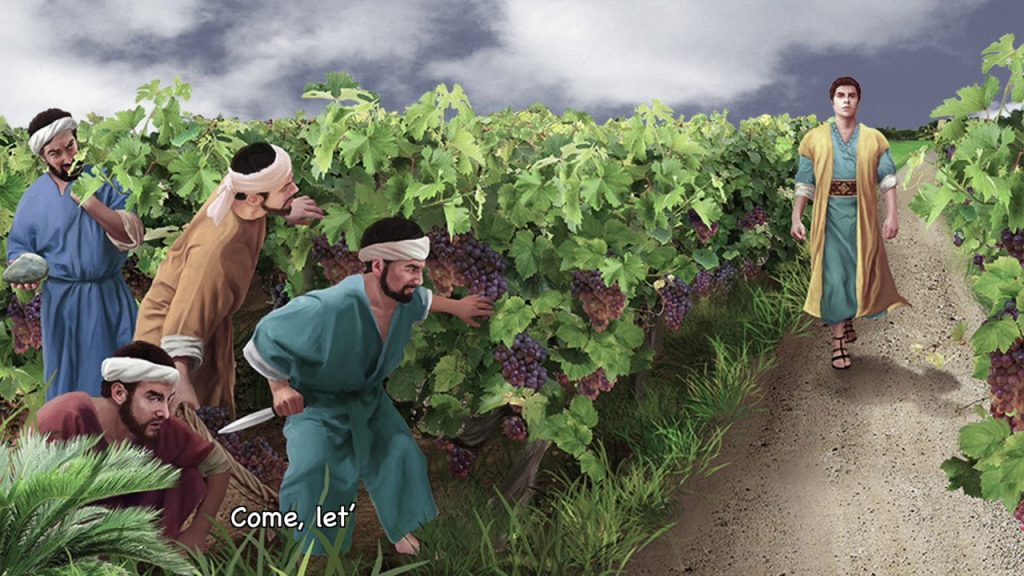 “Hear another parable. There was a landowner who planted a vineyard, put a hedge around it, dug a wine press in it, and built a tower. Then he leased it to tenants and went on a journey. When the vintage time drew near, he sent his servants to the tenants to obtain his produce.  But the tenants seized the servants and one they beat, another they killed, and a third they stoned.  Again he sent other servants, more numerous than the first ones, but they treated them in the same way. Finally he sent his son to them, thinking, ‘They will respect my son.’ But when the tenants saw the son, they said to one another, ‘This is the heir. Come, let us kill him and acquire his inheritance.’  They seized him, threw him out of the vineyard, and killed him.  What will the owner of the vineyard do to those tenants when he comes?” They answered him, “He will put those wretched men to a wretched death and lease his vineyard to other tenants who will give him the produce at the proper times.” And Jesus said to them, “Did you never read in the Scriptures: ‘The stone that the builders rejected has become the corner stone; by the Lord has this been done, and it is wonderful in our eyes’?  Therefore, I say to you, the kingdom of God will be taken away from you and given to a people that will produce its fruits.”

“Furthermore, as Our Lord Jesus Christ himself says, he planted a vineyard and rented it out to some farmers who had to give him the produce at the proper time. Also he sent them his servants to demand the benefits produced by the vineyard. Those, however, filled them with insults; others they killed and refused to give them the product. Still he sent others, who suffered similar treatment. And the father of the family, the landowner who planted and rented out his vineyard, tells himself: I will send my only son; perhaps they will respect him. He says, and he sent also his son. The tenants said among themselves: This is the heir; come let us kill him and his inheritance will be ours. And they killed him and threw him out of the vineyard. When the landowner arrives what would he do to those tenants? They answered him: He will put those wretched men to a wretched death and lease his vineyard to other farmers who will give him the produce at the proper time.” The vineyard was planted when the Law was deposited into the hearts of the Jews. The prophets were sent to demand the fruit, that is, righteousness of life. These prophets received insults and were even killed. Christ was also sent, the only Son of the Father of the family, and they killed the heir, and for this they lost the inheritance. The bad decision produced the contrary effect. To possess the inheritance, they killed him, and for having killed him, they lost the inheritance” (s. 87, 3).

With this parable in mind, when referring to the Passion of Christ, St. Augustine indicates: “My enemies said bad things about me: let us see when he dies and his name perishes. It refers to the person of our Lord Jesus Christ, but let us see if in it we do not include also the members. This was said referring to the time when our Lord was living physically in this world. The multitude was following him, captivated by his authority, by his divinity and majesty radiated by his miracles. When the Jews saw this, the Lord had already alluded to them in a parable, putting these words in their lips: This is the heir; come let us kill him and his inheritance will be ours; they said among themselves what the voice of the High Priest Caiaphas expressed: You see how the great multitude follows him, and the whole world goes after him; if we allow him to live, the Romans will come and take us out, the land and the nation. The evangelist explained to us the meaning of the words, that he who said it did not understand what he said: He said this not by himself, but being the High Priest, he prophesied that it was convenient that Jesus die for the people and for the nation. Nevertheless, they, on seeing that the people followed him, said: When he dies, his name will also perish; that is, when we kill him, his name will not remain on earth, he can no longer seduce anyone after his death; by his death people will realize that they were following a man, and that in him there was no hope of salvation; they will abandon his name and it will disappear. He died, yes, but his name did not perish, rather it was like a seed that was planted. He died, but it happened that the seed, once it dies, produces the harvest” (en. Ps. 40, 1).

a. “There was a landowner who planted a vineyard, put a hedge around it, dug a wine press in it, and built a tower. Then he leased it to tenants” (Mt. 21:33).

c. Pray with the phrase: “Thank you, Lord, for all your gifts,” or “Lord, everything is yours, help me to give the fruits.”

Think of everything that you can share with those around you about the experience you had with God, especially about giving God the fruits because our life belongs to him. The following points can help you to share with your community the experience of the lectio divina on this text.

Turning towards the Lord: Lord God, Father Almighty, with pure heart, as far as our littleness permits, allow us to give you our most devoted and sincere thanks, begging with all our strength from your particular goodness, that you deign to hear our petitions according to your goodwill, that by your power you may drive away the enemy from all our thoughts and actions; that you increase our faith, govern our mind and give us spiritual thoughts and bring us to your happiness, through your Son Jesus Christ, our Lord, who with you lives and reigns in the unity of the holy Spirit, one God, forever and ever. Amen (en. Ps. 150:8).