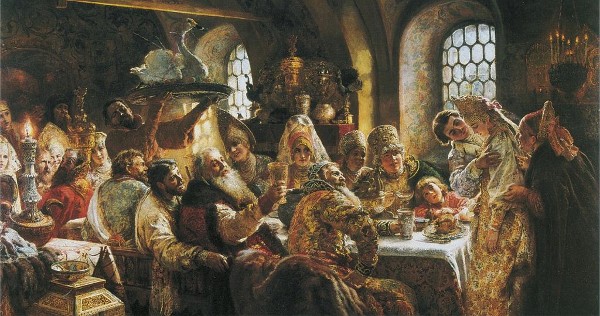 Come, Holy Spirit, by whom every devout soul, who believes in Christ,  is sanctified to become a citizen of the City of God! (en. Ps. 45:8) Come, Holy Spirit, grant that we receive the motions of God, put in us your flame, enlighten us and raise us up to God. (s. 128,4) Amen.

Jesus again in reply spoke to them in parables, saying, “The kingdom of heaven may be likened to a king who gave a wedding feast for his son. He dispatched his servants to summon the invited guests to the feast, but they refused to come. A second time he sent other servants, saying, ‘Tell those invited: “Behold, I have prepared my banquet, my calves and fattened cattle are killed, and everything is ready; come to the feast.” Some ignored the invitation and went away, one to his farm, another to his business. The rest laid hold of his servants, mistreated them and killed them. The king was enraged and sent his troops, destroyed those murderers, and burnt their city.  Then he said to his servants, ‘The feast is ready, but those who were invited were not worthy to come. Go out, therefore, into the main roads and invite to the feast whomever you find.’  The servants went out into the streets and gathered all they found, bad and good alike, and the hall was filled with guests.  But when the king came in to meet the guests he saw a man there not dressed in a wedding garment.  He said to him, ‘My friend, how is it that you came in here without a wedding garment?’ But he was reduced to silence. Then the king said to his attendants, ‘Bind his hands and feet, and cast him into the darkness outside, where there will be wailing and grinding of teeth.’  Many are invited, but few are chosen.”

“I concentrate on a certain passage of the Gospel and it moves me; I think it also moves you. After having invited many to the wedding, the good and the bad, and after having filled the seats with guests (since at his orders, the servants sent invited the good and the bad), the king came in to see the guests, and he found one who did not have the wedding garment on; and said to him what you already know: Friend, how did you come in here without the wedding garment? And the other remained silent. Then the king ordered that they tie him up hands and feet, and throw him outside into the darkness. An individual whom I do not know was thrown out of the banquet, in the midst of a multitude of guests. Nevertheless, the Lord desires us to know that that one man represented a body composed of many members, so that as soon as he gave orders to throw him out and send him to the merited torments, he immediately added: Because many are called, but few are chosen. How are we to understand this? You gathered a multitude, a great crowd came in; you announced, you spoke, and they multiplied exceedingly, the wedding got filled with guests; only one man was thrown out from there, and you say: Many are called but few are chosen. Why not rather say: All are called, many are chosen, and one is rejected? If he had said: Many are called, a great number are chosen, and a few were condemned, it would be much easier to understand that among these “few” was the ‘one’.  On the other hand, what he says here is that from there only ‘one’ was thrown out, and he adds: Because many are called but few are chosen. Who are the chosen but those who remained in the banquet? One is thrown out, the chosen remained. How come that one among the many is excluded, yet the “chosen” are “few”? Only because in that “one” there were many. All lovers of earthly pleasures, all who put first earthly happiness before God, all who seek one’s own interest and not that of Jesus Christ, pertain to that one city mystically called Babylon, whose king is the devil. Nevertheless, all those whose happiness is in the things above, who meditate on heavenly realities, who live in this world preoccupied of not offending God, who make effort not to sin, who are not ashamed to confess they are sinners, who are humble, meek, holy, just, pious, good; all of these belong to the one city whose king is Christ. The first is more ancient in time, but not in sublimity and honor. That was born first, this later. That began with Cain, this with Abel. These two corporations, at the command of two kings, belong each to one of the two cities. The two are mixed and are enemies to each other until the end of the world, while the separation is not done, when some are placed at the right and the others at the left, and it is said to them: Come, you blessed by my Father, take possession of the kingdom prepared for you from the foundation of the world; and to the others also: Go to the eternal fire, prepared for the devil and his angels. It is Christ who says: Come, blessed by my Father, take possession of the kingdom that is prepared for you from the foundation of the world. He is the king of his city, the universal Conqueror. On the other hand, those at the left are sent to the city of the wicked. He tells them: Go to the eternal fire. Does he separate them from their king? No, no, because he adds: That was prepared for the devil and his angels” (en. Ps. 61, 6).

Think of everything that you can share with those around you about the experience you had with God, especially about putting on the festal garment in order to remain in the banquet of the kingdom of heaven. The following points can help you share with your community the experience of the lectio divina on this text.

Turning towards the Lord: Lord God, Father Almighty, with pure heart, as far as our littleness permits, allow us to give you our most devoted and sincere thanks, begging with all our strength from your particular goodness, that you deign to hear our petitions according to your goodwill, that by your power you may drive away the enemy from all our thoughts and actions; that you increase our faith, govern our mind and give us spiritual thoughts and bring us to your happiness, through your Son Jesus Christ, our Lord, who with you lives and reigns in the unity of the Holy Spirit, one God, forever and ever. Amen (en. Ps. 150:8).

“Friend, how did you come in here without putting on the wedding garment?” It was not possible to feign anything to the person being asked. He was looking at the garment that he wore in his heart, not on the flesh, because if it were about the exterior garment, he could not have hidden it from the servants” (s. 90, 4).