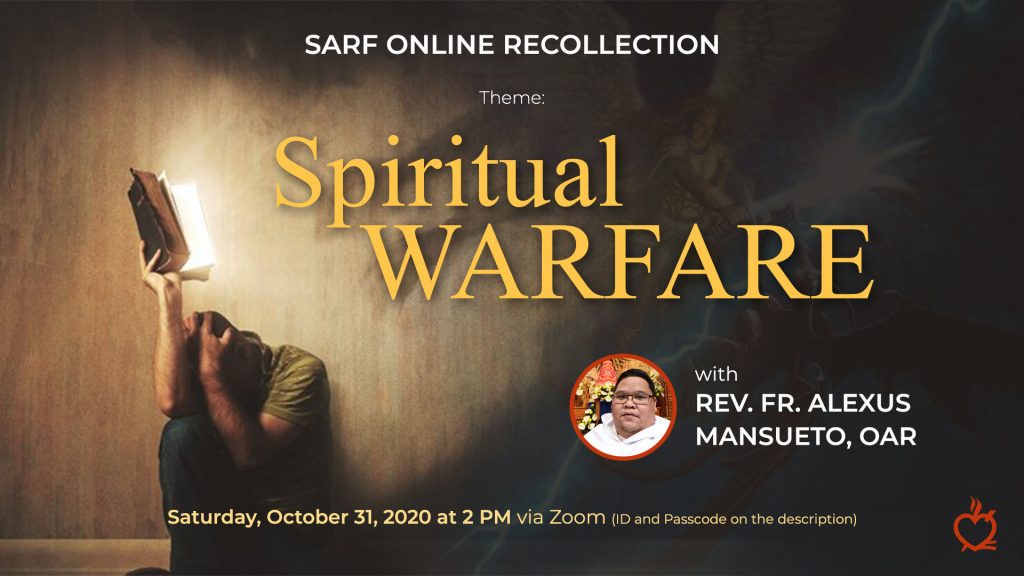 BAGUIO CITY–It’s that time of the year again when we remember our departed loved ones. Especially for Filipinos, this is also a significant time when we reunite with those who remained, particularly our families and relatives. The COVID-19 pandemic, however, had dramatically shifted how we experienced such commemoration this year, rendering the accustomed visits very limited and unsafe. But despite the situation, one thing also that we can all agree on is that on the 1st of November every year, we associate it practically instantly with the word ‘Halloween’, a word which had confused many in so many ways. One general idea of such ideology is on how we remember not only the dead but also the spirits and the otherworldly entities that we grew up hearing or encountering a lot of. This idea should be put under a proper spotlight and should be studied properly according to our Catholic Christian faith, in the context of the Filipino setting.

We, the SARF communities throughout the country, are indeed glad to have Fray Alexus Mansueto, OAR, a Spiritual Director and Exorcist currently assigned in Recoletos de Baguio (Casiciaco Recoletos Seminary), to offer his thoughts, experiences, and advice to us about the topic in the form of a recollection. Last October 31, 2020, a ‘virtual recollection’ was made possible using Zoom as the main video conferencing tool. The virtual event started at 2:00 in the afternoon, wherein around 112 SARF members actively participated. We were glad to have Fray Manuel “Maning” Lipardo, OAR, spiritual adviser of SARF de Inagawan, to be with us during the said event, too.

The recollection officially started with an opening song with the title ‘Have Thine Own Way, Lord,’ followed by a proper opening prayer by the recollection master himself, invoking the protection and guidance of St. Michael the Archangel and our dear personal angels. Fr. Buloy, as our recollection master is known, introduced the theme of the recollection: ‘Spiritual Warfare: ‘Knowing and Resisting the Devil in Daily Life.’ Fr. Buloy began by stressing the importance of having an orthodox knowledge about angels and demons, and of putting on the armor of God because there’s a higher form of evil aside from the mere absence of good (such as physical evil, e.g., sickness, and moral evil, e.g. corruption in the government). The higher form of evil referred to herein is the devil himself, who happens to be a real person, too, in the form of an angel who on his own will chose to go astray and disobey God. We, humans, encounter the devil practically in every moment of our life, and temptations are just one of the many manifestations of his wit, presence, and influence.

Since this is spiritual combat, it’s a prerogative that we put on the armor of God lest we falter in fear and corruption not only from without but also from within. Paul Thigpen, in his work ‘Manual for Spiritual Warfare,’ states the importance of knowing the enemy as the first rule of any type of warfare. In other words, knowing the enemy is a sure first step to avoiding any dangers or casualties the evil encounter might bring. Fr. Buloy further explains the devil as the king of deception who loves not to be recognized as himself but to be identified by us as something or somebody else. We are in a constant battle with the enemy, and the Devil—who cannot make the Mother Church fall—will primarily target families which is the source of all vocation.

Fr. Buloy also gave examples of how much we really need the proper guidance of Divine Revelation and the Magisterium of the Catholic Church in this era where the devil is very loud and clear. There are many sources of deception that we are currently in, even in this 21st century. Superstitions, myths, urban legends, occult, and other new-age sources often provide teachings that are contrary to what our Mother Church is trying to teach. One example Fr. Buloy gave was about the Filipinos who are taught to believe that the soul of an infant who died will turn into an angel, which in the real sense is impossible; humans can never be angels because the latter are pure spirits.

The recollection furthered with a good discussion about angels. Angels were created by God for 2 big reasons: 1) to proclaim or sing God’s majesty and glory, and 2) to execute God’s will in creation. By nature, they are non-corporeal which means they are not defined by any material body. They originally belong in the preternatural world but were escalated to the supernatural world with God after the fall. Angels have a far superior intelligence and authority compared to man, and they also have their personality and will (yes, they can choose to disobey God, such as what the fallen angels did). Proper to their nature, God has assigned them names, but these names are unknown to men unless revealed. We as common people should be careful about the naming scheme of such angels because aside from the four (St. Michael, St. Gabriel, St. Raphael, and lastly, Lucifer), no other real names were revealed. Any other names might be demonic and we all should be wary of admitting them or calling upon them whatever the case may be.

Envy, hatred, and Pride—three of the most agreed primary reasons why some angels chose to disobey God and thus fell to damnation. Though it wasn’t clear in the scriptures, the teachings of the church cite such disobedience has something to do with God’s plan of creating man in His image and likeness, and of becoming human in form as a God-Man. Much more tension arose when God declared a woman—Mary—to be the God-bearer and will be higher and more supreme over the angels. For these reasons, the fallen angels chose not to serve God. They couldn’t accept God taking the very benign form of man, much less bowing before Mary who is also very human albeit immaculate. Their rejection of God and man’s destiny is absolute and radical based on their nature, and hence irrevocable, turning them into perpetually perverted spiritual living beings. They are incapable of repentance and redemption, that’s why they are angry with the idea that men, despite their efforts, may still get to heaven.

Fr. Buloy continued with discussing the capabilities of the devil as the master seducer and deceiver, whose actions were not to only tempt human beings away from God, but to also scorn and chain them to bondage leading to spiritual blindness or destruction. As deception is natural to these fallen angels, they are capable by their nature to be anything or anyone they want to be, be it an elemental (like a dwarf or fairies), Mother Mary, or a human being (deceased or not). Through idolatry (e.g., saying tabi-tabi po to a soil mound, or making offerings to the dead or to an invisible entity) and moral corruption (e.g., same-sex marriage, abortion, etc.), the devil succeeds in his perverted mission of capturing the hearts of men.

The actions of the devil can be either ordinary (e.g., through temptations), or extraordinary which requires help. For the latter, we have demonic obsessions (intrusion or attack on the sensibility of a subject), demonic oppressions (sudden or chronic torment on the physical body through inexplicable causes or signs), demonic infestations (for places, animals, and inanimate objects), demonic possessions (the demons taking over the body), and demonic subjugation (when a victim becomes an accomplice already).

Malignos/Engkantos as we know them are technically called ‘Elementals.’ They are nature spirits who are fallen angels capable of inflicting harm, and they inhabit things in nature such as trees and rocks. They take such forms (elves, sirens, etc.) as myths and fantasies have appropriated them to be so that they can be identifiable to us humans. Giving in to their rules is an act of idolatry, and the best way to counter them or at least to protect one’s self is to pray the proper Catholic prayers taught to us, even the basic ones. Jesus Christ is, after all, the sovereign God above all these fake gods.

So what can we do? One big thing according to Fr. Buloy is to be cognizant of the presence of our guardian angels, who from the beginning of time until death, stand alongside us in helping God fulfill his eternal plan on us. These guardian angels are protectors not only of our souls but also of our bodies, and their influence on our daily lives depends on how much we are believers and how much we are willing to participate in our spiritual growth. In our spiritual warfare, we must not believe that the famous prayer ‘Angel of God’ is only for children; it is rather a powerful prayer that we can cite to protect us from evil spirits. At the end of our daily battle, we have the angels as loyal friends whom God has given us as our wards unique to each and every one of us.

The recollection given by Fr. Buloy was gratefully acknowledged by the SARF participants with a big round of applause. Followed thereafter was the question-and-answer session where Fr. Buloy generously answered questions and clarifications. Some questions being answered were about some common Filipino practices like doing the 40 days celebration after the death of a person, a blessing of a house, signs of demonic infestations, and so on. After all the questions were answered, the blessing of the sacramentals commenced. Fr. Buloy briefly introduced what these sacramentals are and do, and blessed our readied articles such as water, oil, salt, and candles, after which we are told to go ahead and sprinkle these into our own objects. The recollection finally concluded with a final blessing from Father Buloy, followed by the sign of the cross.

Ultimately, Father reminded us that in all kinds of demonic attacks regardless of gravity, it is always a call for us for renewal or conversion. One day, the gates of hell will be opened and the king of lies will be set free from his chains according to some prophecies. It is our job to be ready, wear the armor of God, cooperate with our guardian angels, fight the good fight, and live the faith to the best of our ability.