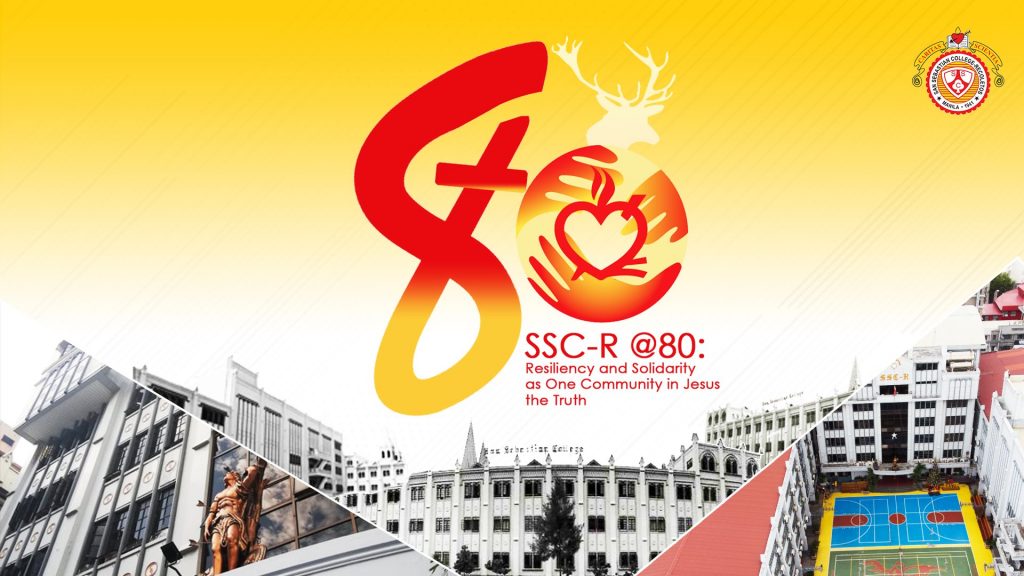 MANILA–San Sebastian College–Recoletos, Manila began its 80th Foundation Anniversary celebration on Wednesday, January 20, 2021, coinciding with the Feast Day of St. Sebastian. In the commencement of foundation activities, a Eucharistic Celebration was held at the Basilica Minore de San Sebastian. The Solemnity celebration of the Mass was presided by Most Rev. Honesto F. Ongtioco, D.D., Bishop of Diocese of Cubao, and concelebrated by Fray Dionisio Q. Selma, OAR, Prior Provincial of the Province of St. Ezekiel Moreno; Fray Nemesio D. Tolentin, OAR, the College President; and the Order of Augustinian Recollect (OAR) Fathers from different communities.

Bishop Ongtioco’s homily focused on fidelity. He encouraged everyone to be faithful and emulate San Sebastian whose life has been anchored in his faith in Jesus. “When we are anchored in God, in Jesus, whatever comes in life… we shall overcome for we are not alone; be faithful until the end,” he said.

He further reminded everyone that we are “gifted to give,” that we have been blessed so we are called to be a blessing to others. This serves as our gift and offering to God in celebration of the 500 years of Christianity and 415 years of presence of the Recollects in the Philippines.

As Bishop Ongtioco gave his final blessing, he reiterated to everyone to be “steadfast in faith and joyful in hope.”

The solemnity was also attended by the Sebastinian community, Augustinian Recollect (AR) Sisters and parishioners.

After the Eucharistic Celebration, the opening ceremonies have been held virtually and live streamed thru the official Facebook Page of San Sebastian College-Recoletos “Stags”. It was opened up with the brief history of SSC-R, Manila which was founded by the Order of Augustinian Recollects in 1941. The presentation was made even more meaningful with the Institutional Prayer led by Fray Allan Rubett A. Cabatian, OAR, the Director of Campus Ministry Office (CMO).

What came next was the stirring opening remarks delivered by the College President, Fray Nemesio Tolentin, OAR. He made mention of the inspiration that St. Sebastian, the school’s patron saint and the loving guidance of Jesus Christ, which made the school surpass trials, challenges, uncertainties and crises such as the COVID-19 pandemic. He highlighted the strength and resilience of the community in continuously offering Catholic Christian education anchored on the Augustinian-Recollect charism, as the reasons to be grateful and to celebrate the school’s milestone.

Fray Tolentin said, “Through the years, SSC-R remains committed to provide quality Catholic Christian education and to the total human formation of the students and the members of the school community, anchored on the Augustinian Recollect values and charism.

SSC-R has faced storms of challenges and trials but it persevered and continued to grow through the efforts, hard work, dedication, sacrifices and resiliency of the members of the Sebastinian community. It has always risen to the challenge of delivering its mission and achieving its goal.

Joyfully, the community watched a lively dance number by some talented high school students, after which Fray Tolentin announced the theme of the celebration, “SSC-R@80: Resiliency and Solidarity as One Community in Jesus the Truth” and declared it open.

Reverberating in each of the spectators’ minds are the inspiring and challenging words that Fray Dionisio Selma, OAR, Prior Provincial of the Province of St. Ezekiel Moreno, made mention. He asserted in his greetings how fitting the theme is – “Resiliency and Solidarity as One Community with Jesus the Truth.” He said that the chosen theme fits very well as the school celebrates its anniversary at this trying time. He further said that this should challenge every Sebastinian “to awaken the resilience and courageous spirit of their predecessors and forefathers with that “Dugong Sebastino” they once held.” Father Selma continued to address everyone to be faithful with one mind and one spirit, in solidarity with the needy, anchored on the strongest foundation, who is Christ.

Added to the inspirations were the moving messages of the two of the best alumni that the school has ever produced. Gretchel Soltones was grateful for having San Sebastian College as her alma mater that helped her achieve her dream of graduating as a famous athlete. She, as well, gave the challenge for the school to help more struggling students and athletes to realize the same dream.

On the other hand, Francis Kong, a renowned speaker, had all his praises and gratefulness to the College. He said he is a proud graduate of the school who has given him all the opportunities and support which shaped and trained him of what he is today. He mentioned about his debt of gratitude to the school and for every Sebastinian’s reason to be proud of this institution. Francis Kong’s greetings was made more memorable with the singing of the College Hymn and a virtual display of happy fireworks.

Right after the opening ceremonies, the SSC-R community celebrated the Pistang Sebastino, in honor of its patron saint, St. Sebastian. Though not celebrated in the traditional way, wherein office hopping is allowed, the community jubilantly participated in the celebration.

On the second day, January 21, 2021, a mass was celebrated and presided by Fray Nemesio D. Tolentin, OAR, at the St. Ezekiel Moreno Chapel, SSC-R, Manila. This was followed by alternative classes (basketball clinic, cooking show, and webinar on business and marketing), speech fest, quiz bee, and Zumba dance program. Simultaneously, a mini-concert was held at the lobby of St. Monica Building.

On the third day, January 22, 2021, a Mass for vocation was celebrated and presided by Fray Allan M. Jacinto, OAR, the National Vocation Director of the Recoletos.

A webinar entitled “Healing Wounds” was given by Fray René F. Paglinawan, OAR, former Prior of San Sebastian community, via Zoom to the basic education students and faculty members. Alternative classes like baking, hosting, and directing were provided by alumni to the Junior High School and Senior High School students.

At around two o’clock in the afternoon, the Service Awards for SSC-R employees commenced. The Service Awards aims to honor its employees and faculty who have rendered meritorious years of service to the school.
While the program has been around for quite some time, it has already become the focal point in celebrating the school’s foundation anniversary. It has served as the essential part of the foundation celebration where employees spend time to honor and congratulate awardees/recipients of the five, 10, 15, 20, 25, 30, 35 and 40 years of service recognition certificates and trophies. However, the threat of COVID 19, that changed the world, has definitely changed the recognition day set up. Realizing the threat of the virus, the Service Awards was done the simpler, shorter, safer but bolder way.

Twenty-one (21) awardees in their face masks and face shields were physically present in Fr. Domingo Carceller Hall. Five (5) awardees along with the other Sebastinians attended the program virtually, via Google Meet.

The program was short and simple with an equally simple after-cocktails held at the Seminar Room. But then again, the simplicity of the program makes it more meaningful. The resounding congratulatory message of the College President created the motivation to do better and move forward as he said that the years spent in SSC-R is not just work but service. The response given by Mr. Leoquito Ambay of 40 years, served as the inspiration to note that reaching one’s full potential becomes an easy task because of the administrators’ and community support.

The online concert and announcement of winners on the poster making contest and TikTok challenge culminated the 3-day anniversary celebration.

On a final note, the celebration brings unstoppable solidarity and dedication of the Sebastinian community to commit themselves for the common good and to achieve its mission and goals. The community will always rise up, strive and live up to the Sebastinian and Augustinian Recollect values, ideals and charism with courage, resilience and faith in Our Lord.