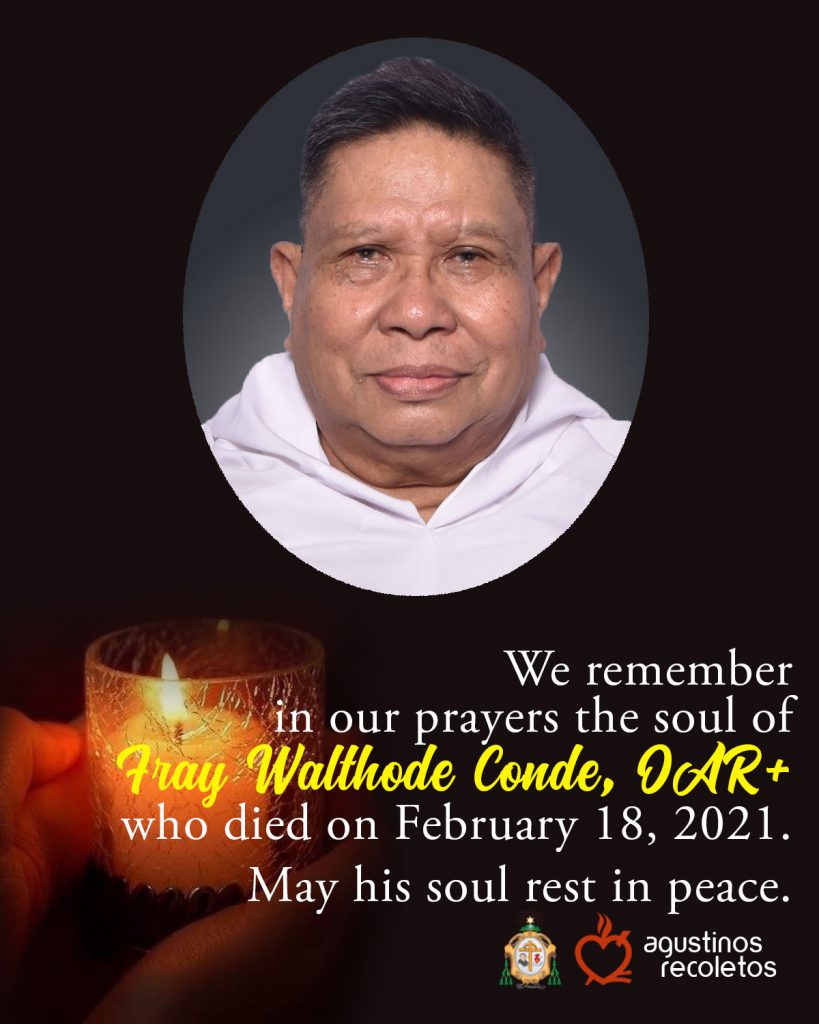 We would like to notify you of the passing away of our brother, FRAY WALTHRODE BRACERO CONDE, OAR on February 18, 2021 at Dr. Pablo O. Torre Memorial Hospital (or Riverside Medical Center) in Bacolod City, Negros Occidental, due to septic shock which was antecedently aggravated by his liver cancer and hospital-acquired pneumonia. He was 85 years old.

Father Conde was born on April 9, 1935 in Kauswagan, Lanao del Norte. After his elementary education in his hometown and a part of his high school life in the nearby Iligan City, he joined the Recollect formation program, finishing his high school and college at the Jesuit-run San Jose Seminary in Quezon City in 1955 and in 1959, respectively. On July 8, 1959, together with two other Filipinos, he entered the novitiate in Monteagudo, Navarra, Spain, receiving the sacred habit of the Order and appending “del Santísimo Sacramento” to his name. He made his simple profession of vows in the same convent on July 9, 1960. On the third year of his theological studies in Marcilla (Navarra, Spain), he made his solemn profession on July 9, 1963. Also in Marcilla, he received the diaconal ordination on March 26, 1964, and the presbyteral ordination on July 19 of the same year, from the hands of the Recollect bishop, Most. Rev. Javier Ochoa.

Upon his return to the Philippines, he readied himself for religious assignments in various capacities. In 1965, he spent some months of pastoral theological studies at the University of Sto. Tomas (UST) in Manila. Then, he was assigned in Palawan for six years, from 1965 to 1971: as Prefect of Discipline of the Seminario de San Jose in Puerto Princesa (1965-1966); as assistant parish priest of Narra (1966); as parish priest of Roxas (1967); and, then, back to Narra as its parish priest (1967-1971).

From 1971 to 1977, he lived and worked in the community of San Sebastian College-Recoletos in Manila where he was appointed Coordinator of the Elementary Department (1971-1974), and Dean of Student Welfare, Vice President, and Athletic Moderator (1974-1977). Opportunely, as he ended his term in 1977, he had also earned his Master of Arts in Religious Education from the University of Sto. Tomas.

His two succeeding assignments were in the Visayas. From 1977 to 1982, he worked as the School Treasurer of the University of Negros Occidental-Recoletos in Bacolod City. He also ended his term here, just like in Manila, obtaining a degree: Master in Public Administration. From 1982 to 1988, this time at the University of San Jose-Recoletos, Cebu City, he held two major administrative posts: as Vice President for Administration and Vice President for Academics.

The next two triennia saw him dedicating his religious and priestly life at San Sebastian College-Recoletos, Cavite City: as the local prior of the community (1988-1991), and as the School President (1988-1994). In addition, we note that he was among the delegates representing the then Vicariate of the Philippines and China to the 1988 Provincial Chapter of the Province of San Nicolas held in Monteagudo (Spain).

In 1994, he retraced his way back to the University of San Jose-Recoletos in Cebu City where he focused in the school apostolate for the next nine years, taking the same twin offices he previously held here namely, as VP for Administration and VP for Academics (1994-2000), then as its President for a triennium (2000-2003). It was during this stint in Cebu that he obtained the degree of Master in Business Administration in 1998, and his doctoral degree in Human Resource Management in 2000.

Finally, his last – and, obviously, the longest – assignment was in the University of Negros Occidental-Recoletos in Bacolod City where he stayed for practically 18 years, from 2003 to the moment of his demise. At various times, he was the Coordinator of the School of Agriculture, Director of Religious Education Department, and Director of Human Resource Management and Development Office. Last July 9, 2020, he performed a memorable feat – which surely was, at the same time, God’s grace – of being the first Filipino Recollect to have celebrated the diamond jubilee of his simple profession of vows.

Father Conde is known for having assimilated the brand of Augustinian Recollect formation particularly on the religious observance of common acts and on apostolic fervor. His presence in the chapel, refectory, and sala de recreo, despite the physical infirmities that have particularly taken their toll on him in his later years, remains as inspiring as his strong dedication to the tasks assigned to him. He might have been slowed down by his illnesses, but these were never an excuse for him not to report to his office nor join in the community prayers, so long as his physical condition would still allow it. The younger religious may also feel motivated by his version of youthfulness despite his being the oldest in the Province, such as engaging in sports. Remember how he would still gamely participate in soccer matches with his fellow religious, taking always the specialized position of a goalkeeper?

Moreover, his compassionate and kind demeanor which betrays his stern countenance is often recounted by his lay collaborators and working students who see the father figure in him.  He is also appreciated for his simplicity and down-to-earth attitude in the same way that he is admired for his respect and obedience to proper authorities. Although his sense of sacrifice also marks his religious life, it has particularly helped him endure the sufferings by which he refused to be crippled during these past months. And we would like to believe that his usual paternal advice to his friends to humbly resign to and to put trust in the mysterious plan of God must have been his very own compass and spiritual direction to get through all kinds of life’s harsh situations with joy and tranquility.

May God who is faithful to his promises grant to our brother, Father Conde, fulfilment to the words of Saint Peter: “And when the chief shepherd is manifested you will obtain the unfading crown of glory” (1 Pet. 5:4).