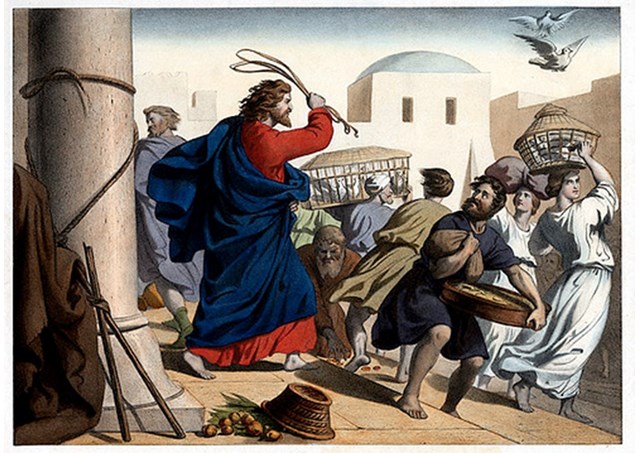 Since the Passover of the Jews was near, Jesus went up to Jerusalem. He found in the temple area those who sold oxen, sheep, and doves, as well as the money-changers seated there. He made a whip out of cords and drove them all out of the temple area, with the sheep and oxen, and spilled the coins of the money-changers and overturned their tables, and to those who sold doves he said, “Take these out of here, and stop making my Father’s house a marketplace.” His disciples recalled the words of scripture, “Zeal for your house will consume me.” At this the Jews answered and said to him, “What sign can you show us for doing this?” Jesus answered and said to them, “Destroy this temple and in three days I will raise it up.” This temple has been under construction for forty-six years, and you will raise it up in three days?” But he was speaking about the temple of his body. Therefore, when he was raised from the dead, his disciples remembered that he had said this, and they came to believe the scripture and the word Jesus had spoken. While he was in Jerusalem for the feast of Passover, many began to believe in his name when they saw the signs he was doing. But Jesus would not trust himself to them because he knew them all, and did not need anyone to testify about human nature. He himself understood it well.

LET US MEDITATE NOW WITH THE COMMENTARY OF ST. AUGUSTINE ON THESE WORDS OF THE GOSPEL ACCORDING TO ST. JOHN.

“Behold, the temple was still a figure, and from it the Lord drove out all those who sought his own, those who had come to the markets.
And what were they selling there? What men needed for the sacrifices of that time. Know, therefore, my Brothers, that in accord with their carnality and stony heart, this people were given sacrifices such that they impeded
them from passing little by little to idols and they offered sacrifices there –oxen, sheep, and doves- ; you know because you have read it. Therefore, there was no grave sin if in the temple they would sell what was bought to be offered in the temple. And, nevertheless, he drove them out of there… Nevertheless, brothers, neither did he give them consideration – he who was to be flogged by them, he flogged them first-, I say; he shows us a sign, because he made a whip of cords and with it he flogged those undisciplined men who were making the temple of God a commercial establishment. The fact is that each one has woven by their sins a whip for himself. A prophet says: Woe to those who drag their sins like a large whip. Who makes a long whip? He who adds sin upon sin that we may seek the mystery of the fact in figure: Who are those who sell oxen, who are those who sell sheep and doves? These are the same as those in the Church who seek what is their own, not those that belong to Jesus Christ. They hold everything for sale who do not want to be redeemed; they do not want to be bought, but they want to sell. In fact, it is good for them that the Blood of Christ redeem them in order to arrive at the peace of Christ. For what does it profit one to acquire in this world something temporal or transitory, be it money or pleasure of the belly or the gullet, or honor in human praise? Is not everything perhaps a smoke or wind? Does not everything perhaps pass by and runs away? And there are those who had adhered to the transitory because they pass altogether! Is not everything perhaps a precipitating current rushing to the sea? And there is one who had fallen because it will be dragged to the sea. We must, therefore, maintain all these affections very far from such concupiscence…. Whom does the zeal for God’s house devour? Whoever tries to correct the self and desires to mend all defects that he might see in it; he does not rest; if he cannot mend it, he tolerates, he moans. The grain is not expelled from the threshing floor, he supports the husk in order to enter into the granary when the husk is separated. Before the granary is opened, you, if you are a grain, do not want to be expelled from the threshing floor, lest the birds pick you up before being gathered into the granary. In fact, the birds of the sky, the heavenly powers, await to take away something from the threshold, and they do not take away but what may have been expelled from there. Thus, devour the zeal for the house of God; devour every Christian the zeal for the house of God; the house of God of which you are a member. Your house, in fact, is the house where you have eternal salvation. You enter your house by a temporal rest; to the house of God you enter by the eternal rest (Io. eu. tr. 10, 4-9).

a. “His disciples remembered what has been written: ‘The zeal for you house devours me’” (Jn. 2:17).

•What desire do you feel for God?
•What respect do you have for the house of God?

b. “… he flogged the undisciplined who made the temple of God into a commercial establishment. The fact is that each one by his sins has made a whip. A prophet says: Woe to those who drag their sins like a long whip! Who makes a long whip? One who adds sin upon sin” (Io. eu. tr. 10, 5).

•What importance do you give to small sins, do you allow that they go braiding to form a cord?

•How is your resolution for conversion?