Message of the Prior General on the Solemnity of Saint Joseph 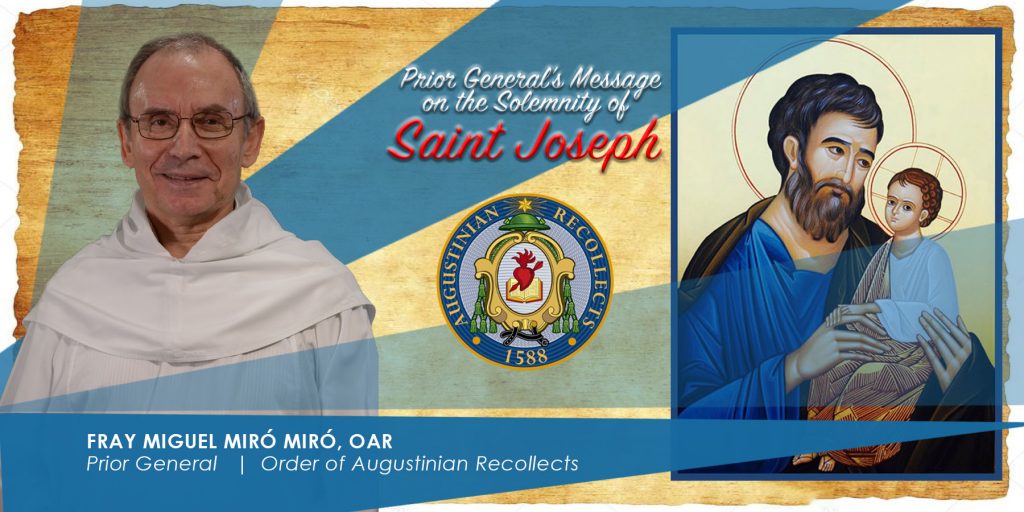 TO THE ENTIRE AUGUSTINIAN RECOLLECT FAMILY

Let us celebrate with joy the Solemnity of Saint Joseph. We thank the Lord for the trust placed on St. Joseph, a just and hardworking man, in whose hands He entrusted the custody of the Family of Nazareth. Let us turn to him, Protector of the Order, so that the Lord through his intercession may arouse hope and joy in our hearts and in our communities.

On December 8, Pope Francis surprised us with the Apostolic Letter Patris Corde (With the heart of a father). In it, the Holy Father recalled the 150th anniversary of the declaration of Saint Joseph as Patron of the Universal Church and announced that, from that day until December 8, 2021, a year dedicated especially to him will be celebrated. The Apostolic Penitentiary has issued a decree on the granting of indulgences especially during this year. (https://press.vatican.va/content/salastampa/es/bollettino/pubblico/2020/12/08/dec.html)

St. Joseph, husband of Mary, is for all of us an example of availability and of trust in God. With his simple life and his fidelity he lifts our spirits and strengthens our hope. Let us look at him so that we can see from faith everything that is happening in our hearts, in the Order, in the Church and in the whole world.

“During these months of pandemic,” the Holy Father says, “when we experienced, amid the crisis… How many people daily exercise patience and offer hope, taking care to spread not panic, but shared responsibility. How many fathers, mothers, grandparents and teachers are showing our children, in small everyday ways, how to accept and deal with a crisis by adjusting their routines, looking ahead and encouraging the practice of prayer. How many are praying, making sacrifices and interceding for the good of all. Each of us can discover in Joseph – the man who goes unnoticed, a daily, discreet and hidden presence – an intercessor, a support and a guide in times of trouble. Saint Joseph reminds us that those who appear hidden or in the shadows can play an incomparable role in the history of salvation.” (FRANCIS, Patris corde, intr.)

In prayer, we also heartily remember each of the brothers and sisters who have left for the Father’s house, victims of this Covid-19 pandemic. To all of them and to all the members of the Augustinian Recollect Family who have lived this time anchored on faith, to those who have known how to endure difficulties and deprivations with patience, to those who have been concerned not to infect or have sought to serve and help, to all of them are due our appreciation and gratitude.

The Pope describes St. Joseph as a beloved father, a tender and loving father, an obedient father, an accepting father; a father who is creatively courageous, a working father, a father in the shadow. Saint Joseph speaks very clearly through his eloquent silence; He encourages us and at the same time challenges us with his love, his humility and his chastity. “The logic of love is always a logic of freedom, and Joseph was able to love in an extraordinarily free way. It was never put in the center. He knew how to get off the track, to put Mary and Jesus at the center of his life.”(FRANCIS, Patris corde 7)

“Joseph found happiness not in mere self-sacrifice but in self-gift. In him, we never see frustration but only trust. His patient silence was the prelude to concrete expressions of trust… Every true vocation is born of the gift of oneself, which is the fruit of mature sacrifice. The priesthood and consecrated life likewise require this kind of maturity. Whatever our vocation, whether to marriage, celibacy or virginity, our gift of self will not come to fulfilment if it stops at sacrifice; were that the case, instead of becoming a sign of the beauty and joy of love, the gift of self would risk being an expression of unhappiness, sadness and frustration.” (FRANCIS, Patris corde 7)

PROTECTOR OF THE ORDER

Among the early Recollects, the devotion to Saint Joseph was, above all, something personal. Our Chronicles narrate the great confidence that his protection aroused in many religious. The great propagator of his devotion in the Order was Father Gabriel de la Concepción. During his term as prior general (1630-1634) he introduced the hymn Ioseph, the first common act of devotion of the Recollection in honor of the saint. Shortly after, around the year 1650, the solemn celebration of his feast began, on March 19. And, finally, it was in the intermediate general chapter of 1669 when Saint Joseph was declared Protector of the Order. (ÁNGEL MARTÍNEZ CUESTA, Historia de los Agustinos Recoletos vol I, 326-329, 492-94)

His images and his devotion spread from among the Recollect convents. Temples were dedicated to him, brotherhoods were erected in his honor, and his devotion spread massively both in the Philippines and later in America. We have all known brothers and sisters who have distinguished themselves by their devotion to the holy Patriarch, meditating on his pains and joys and asking for his protection in dangers and needs.

Fervor filled Saint Ezekiel and thus preached in the cathedral of Pasto, on the day of his feast, saying: “Who is able to list the favors and graces that God dispenses to men in these times through the intercession of our holy Patriarch? Extreme pains torment the patient; He calls Joseph from his heart and the pains subside… The navigator invokes him at the moment of danger and is freed from the shipwreck. Cold souls sunk in lukewarmness regain fervor and perform wonders on the path of virtue because they came to Joseph. Men who have forgotten their religious duties and God, enter the path of salvation because devout souls have prayed for them to Saint Joseph. Matters of great interest, family discords, terrible rivalries, everything is fixed and everything has the most satisfactory result and outcome by going to Joseph.” (SAN EZEQUIEL MORENO, Homilía (19 de marzo de 1903)

Let us also go to Saint Joseph for protection. Let us ask him this year to intercede with the Lord for the 56th General Chapter, which will begin, God willing, on March 1, 2022. Let us learn from him to put God’s plans before our own. Let us walk together, doing what we have to do; let us look up to heaven and hear the cry of the innocent victims of the Herods of our time. Let us ask through the intercession of Saint Joseph for the grace of the Spirit to live with gratitude and open our hearts to a future of hope.

HOUSE OF STUDY, COMMUNION AND SOLIDARITY

On March 19, God willing, the house dedicated to Saint Joseph will be blessed at Calle Huesca 33 (28020 Madrid), the former Province of St. Joseph Curia. The property includes the house and a office area with entrance through Julián Besteiro 33 street.

We would like this house to be like a “votive lamp” (FELICIANO DE OCIO, Primera carta del Prior general a los religiosos de la Provincia de San José (Madrid, 2 de octubre de 1948) that expresses gratitude to the Saint for his protection, as well as an invocation asking him to inspire us in study, in communion and in charity with the poorest. This religious house will depend on the prior general and will have a triple function:

With the consent of the Archdiocese of Madrid (May 18, 2020), the General Council approved the reassignment of the house and the transfer of the community from the Saint Ezequiel Moreno house to this new one (Prot. CG 33/2021). The transfer became effective on December 21, 2020. And, at the end of that month, we thanked the faithful for their prayer and collaboration during the fifty-one years of presence and service. Finally, on December 31, 2020, after the celebration of the Eucharist, the chapel was desacralized and closed.

We are grateful for the facilities that the Saint Thomas of Villanueva Province has offered, as well as the collaboration of the four provinces in the reform of the office spaces. We thank all those who have made this project possible, which we hope will redound to the good of the entire Order.

May Saint Joseph inspire us with paths of fidelity and availability. Let us ask him to help us create fraternal communities and to be in solidarity with those who suffer and are in need. May the Lord, through his intercession, protect our entire Augustinian Recollect Family.