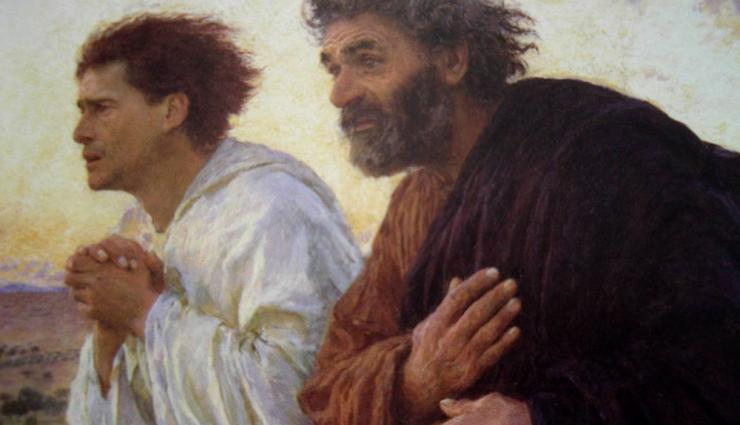 LET US MEDITATE NOW WITH THE COMMENTARY OF ST. AUGUSTINE ON THESE WORDS OF THE GOSPEL AC- CORDING TO ST. JOHN.

“Well then, on the first day of the week, in the morning when it was still dark, Mary Magdalene came to the tomb and saw the stone removed from the tomb. The first day of the week is called by Christian custom the Lord’s Day because of the Lord’s resurrection. Thus, Mary Magdalene ran and came to Peter and to the other disciple whom Jesus loved and tells them: “They have taken the Lord from the tomb and we do not know where they placed him.” Some codices including the Greek, have: “they took away my Lord”, which seemed to have been said because of a very intense affection of love or of servitude. But in the majority of codices that I had at my disposition I have not found this….

Peter and that other disciple went out and arrived at the tomb. They ran together, but that other disciple ran ahead faster than Peter and arrived first at the tomb. Here, one is to take note and evaluate the recapitulation: how he comes back to what was overlooked and as though what follows has been added. Thus, even though he had said: “They arrived at the tomb” he goes back to narrate how they arrived. And he says: how he bent forward (the beloved disciple), he sees the linens placed; nevertheless, he did not enter. Thus, Peter arrived following him and entered the tomb, and saw the linens in place, and the sudarium, that had been on his head, not placed with the linens, but folded in a separate place. Do we suppose that these data do not mean anything? In no way would I think so. But I hurry towards other things in which the necessity of some problem or the obscurity would force to detain me. Therefore, the disciple who had arrived first also entered the tomb. He arrived first and entered last. Evidently, neither is this useless but I have no time for it. He saw, he says, and he believed. Some, for being little attentive, suppose that here John had believed this: that Jesus had risen. but what follows does not indicate this. In fact, what does, what he immediately adds, mean: Because they had not yet known the Scripture: that it was necessary that he rise from the dead? Therefore, he did not believe that he had risen from the dead in respect to someone who did not know that he had to rise. What then did he see; what did he believe? Certainly, he saw the empty tomb and since they had not yet known the Scripture –that it is necessary that he rise from the dead- , he believed what the women had said: that they had removed him from the tomb. And therefore, when they heard the Lord say it in person, even though he said it very clearly, for the custom of hearing him in parables, they did not understand and believed that he was alluding to some other thing (Io. eu. tr. 120, 6, 4. 0).

•Why do you believe that Mary Magdalene went so early to the tomb?

•Where were the other disciples at daybreak on the first day of the week?

b. “He saw and believed; since they had not yet understood the Scripture that Jesus had to rise from the dead” (Jn. 20:9).

•How can you apply in your life the two verbs “see” and “believe”?

•What importance does the Sacred Scripture have in your life?

a. Contemplate Mary Magdalene and her surprise at the empty tomb. Contemplate how she runs. Experience with her the joy of the resurrection, Contemplate Christ risen who has come out of the tomb.

b. Contemplate the empty tomb of Christ. Go in it with Peter and the Beloved Disciple and observe what is in it and live the joy of the morning of the resurrection.