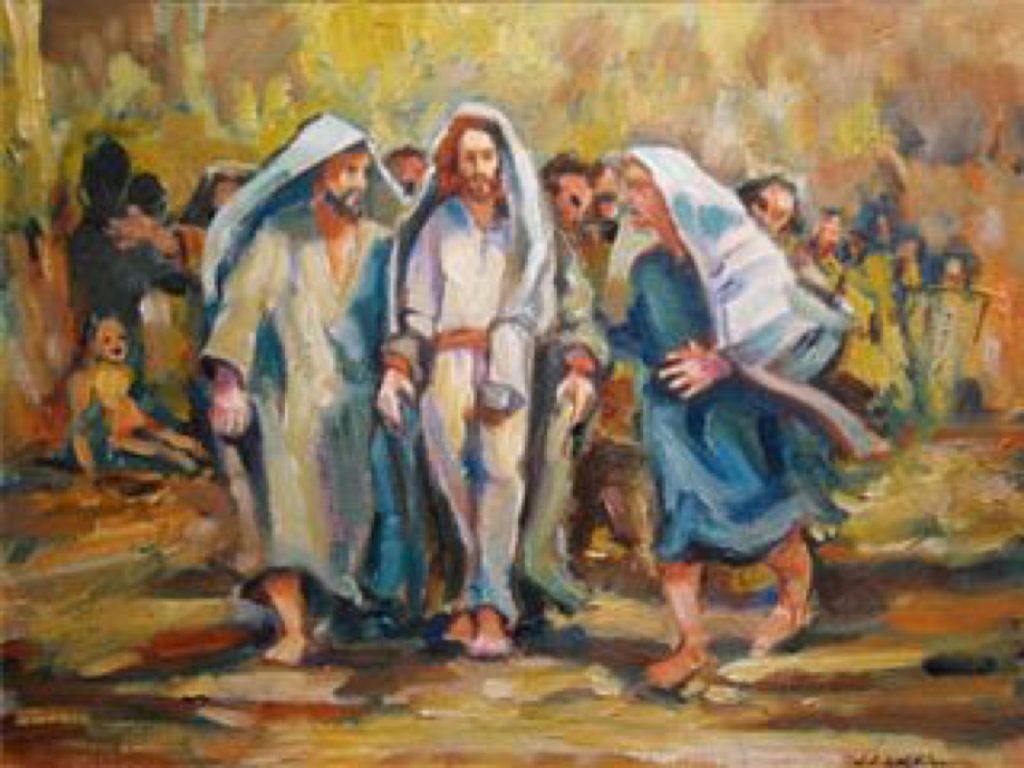 He departed from there and came to his native place, accompanied by his disciples. When the Sabbath came he began to teach in the synagogue, and many who heard him were astonished. They said, “Where did this man get all this? What kind of wisdom has been given him? What mighty deeds are wrought by his hands! Is he not the carpenter, the son of Mary, and the brother of James and Joses and Judas and Simon? And are not his sisters here with us?” And they took offense at him. Jesus said to them, “A prophet is not without honor except in his native place and among his own kin and in his own house.” So he was not able to perform any mighty deed there, except from curing a few sick people by laying hands on them. He was amazed at their lack of faith. He went around to the villages in the vicinity teaching.

St. Augustine is conscious that he is dealing with a passage that appear in the three Synoptic Gospels, thus, he comments: Mark also mentions here almost in its totality the same things as Matthew, if we exclude that his fellow townsmen speak of the Lord as ‘carpenter and son of Mary,’ while according to Matthew as ‘son of the carpenter” And it should not surprise us, since both things could be said. They thought of him as carpenter because he was the son of a carpenter. Luke on the other hand dedicated more space to it, mentioning more details about it (cons. eu. 2, 90).

The fact of working as carpenter and being called son of a carpenter is not reason to be ashamed of but, as St. Augustine points out, all work is good, always and when exercised with honor: “If it were said before the Jews, let us not forget that the Patriarchs kept herds; if before the gentiles or pagans, these were philosophers of great prestige exercising the work of shoemakers; if before the Church of God, carpenter was that just man, chosen as witness of the always, long lasting conjugal virginity with whom the Virgin Mary Mother of Jesus was espoused. Therefore, all arts are good, when men exercise them with honor and without fraud” (op. mon. 14).

And coming back to the text of the Gospel, St. Augustine comments with surprise, how his contemporaries saw him perform miracles and nevertheless did not believe in him: “Finally, they saw the Lord Jesus walk on the earth, perform miracles, gave sight to the blind, open the ears of the deaf, loosen the tongue of the mutes,… walk on the sea, commanded the winds and the waves, raise up the dead, perform so many signs, and almost a few of them believed. … Why, just because no honor is given to a prophet in his own home town? But why is honor given to this prophet among strangers? What follows? Blessed are those who have not seen and yet believed. It is a prediction concerning us, and the Lord has deigned to fulfill in us what he formerly praised. They saw him those who crucified him, they touched, and with all that, few believed; we have not seen nor touched, we heard and we believed. Let it be done in us, the blessing that he promised let it be now fulfilled here in us, because he has preferred us to his own home town, in a future century, because we have been grafted in place of the broken branches” (Io. eu.tr. 16, 5).

Finally, St. Augustine invites us to render homage to Christ. If the home town that gave birth to him rejected him, let the home town that he redeemed and created receive him, i.e., the home land of the kingdom of heaven formed by all the redeemed: Therefore, among us let us render homage to the Prophet, because in his home town he was not given homage. No homage was given him in the home town where he was created, let honor be rendered now in the home town he has created. Certainly, the creator of all was created in that home town, created in her according to the form of a slave, because that city itself where he was created, Sion itself, that Jewish nation itself, that Jerusalem itself he created in person when the Word existed in the Father, because everything was created through him and without him nothing was made. About this man of whom today we have heard, only mediator between God and men, the man Christ Jesus, a Psalm had also formerly spoken of saying: “Mother Zion!” a man will say. A certain man, mediator between God and men, says: “Mother Zion!” Why does he say “Mother Zion”? Because from there he received flesh, from there the Virgin Mary, from whose womb was assumed the form of a slave in which he deigned to appear very humble. A man says: “Mother Zion!”, and this man who says “Mother Zion” was made there, in her he was made man. Surely, he was God before her, and he was made man in her/ The man who was made in her is Himself the Highest who founded her, not the humblest. In her he was made the humblest man, because the Word was made Flesh and dwelt among us; the Highest himself founded her because in the beginning was the Word, and the Word was in God; and the Word was God; all things were created through him. Truly, because he created that Homeland, give him the honor here. The home land in which he was generated rejected him, let the homeland he has regenerated receive him (Io. eu. tr. 16, 7).

•How is your faith in Christ? How much do you need the signs?
•Why are you blessed for believing without seeing?

b. “Because he created that home land, let honor be given him here;. The home land in which he was born rejected him; let the home land that he regenerated receive him” (Io. eu, tr, 16, 7).

•How do you give honor to Christ?
•What does it mean to you: to belong to the new home land that Christ has created (the kingdom of heaven)?

a. Contemplate Christ who humbly accepts the fact that he is not believed nor accepted among his contemporaries. But you invite Christ to come to you in order to receive him into your heart.

b. Contemplate the “miracles” God has done in your life. Let your contemplation become a thankful praise to God like a contemplation that prays for strength and faith to always continue honoring Christ.

“God, precisely because he is God, performs miracles that come out of the normal. But that everyday so many men that before did not exist should be born, is certainly a greater miracle than the resurrection of a few that already existed” (s. 242,1).