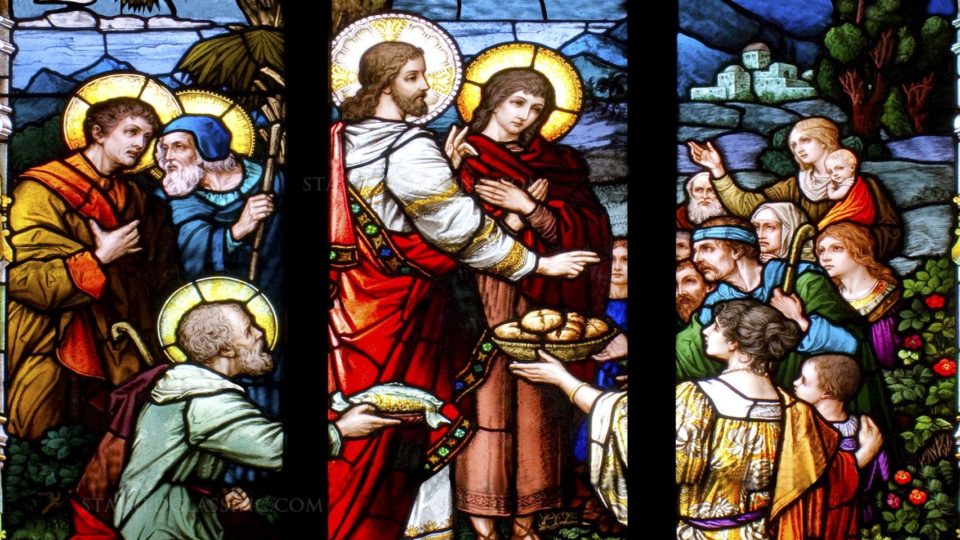 Come, Holy Spirit, by whom every devout soul, who believes in Christ is sanctified to become a citizen of the City of God! (en. Ps. 45:8) Come, Holy Spirit, grant that we receive the motions of God, put in us your flame, enlighten us and raises us up to God. (s. 128, 40) Amen.

1 After this, Jesus went across the Sea of Galilee (of Tiberias). 2 A large crowd followed him, because they saw the signs he was performing on the sick. 3 Jesus went up on the mountain, and there he sat down with his disciples . 4 The Jewish feast of Passover was near. 5 When Jesus raised his eyes and saw that a large crowd was coming to him, he said to Philip, “Where can we buy enough food for them to eat>” 6 He said this to test him, because he himself knew what he was going to do. 7 Philip answered him, “Two hundred days’ wages worth of food would not be enough for each of them to have a little bit.” 8 One of his disciples, Andrew, the brother of Simon Peter, said to him, 9 “There is a boy here who has five barley loaves and two fish; but what good are these for so many?” 10 Jesus said, “Have the people recline.” Now there was a great deal of grass in that place. So the men reclined, about five thousand in number. 11 Then Jesus took the loaves, gave thanks, and distributed them to those who were reclining, and as much of the fish as they wanted. 12When they had had their fill, he said to his disciples, “Gather the fragments left over, so that nothing will be wasted.” 13 So they collected them, and filled twelve wicker baskets with fragments from the five barley loaves that had been more than they could eat. 14 When the people saw the sign he had done, they said, “This is truly the Prophet, the one who is to come into the world.” 15 Since Jesus knew that they were going to come and carry him off to make him king, he withdrew again to the mountain alone.+

He saw the crowd, he realized that they were hungry, mercifully he fed them, not only according to his goodness, but also according to his power. In fact, what profit would there be for goodness alone where there would be no bread to feed a hungry crowd? If power were not to support goodness, the crowd would have continued fasting and hungry. That is why the disciples who were hungry with the Lord, they also wanted to feed the crowd, that they may not remain empty, but they did not have the means to feed the crowd. The Lord asked how they could buy bread to feed the crowd. And the Scripture affirms: “Well then, he was saying this to test him, the disciple Philip, whom he asked, because he himself knew what he was going to do. Why test him if not to show the ignorance of the disciple? And perhaps showing the ignorance of the disciple meant something? It will appear then that on occasion of the five loaves, he would begin to speak of the mystery itself and to indicate what it means. To briefly run through the narrative: the five loaves stand for the five books of Moses; and they were not of wheat but of barley because they belong to the Old Testament. Well then, you know that the barley is created in such a way that one hardly reaches its marrow, since the marrow is clothed with a covering of chaff, and the chaff itself is so resistant and so joined, that it must be removed with force. Such is the letter of the Old Testament, it is clothed with coverings of carnal sacraments ; but if one arrives at the marrow, it nourishes and satisfies.

A young man, then, was carrying five loaves and two fish. If we ask who could be this young man, perhaps it was the people of Israel; he brought it with a puerile attitude, and he did not eat them, since what he was carrying when closed was embarrassing, when opened was nourishing. On the other hand, the two fish seem to me to signify the two sublime persons of the Old Testament who were anointed to sanctify and to govern the people: the priest and the king. And in mystery, finally came the one who was signified through those; finally came he who was shown by the marrow of the barley, but was hidden by the chaff of the barley. That one person only  came who in himself carried the one and the other: the priest and the king; that of the priest through the victim, he himself who for us offered to God; that of the king because he governs us; and what was being carried closed is now open. Thanks to him! Through whom what was promised through the Old Testament was fulfilled.

Therefore, nothing is useless, everything makes a sign that needs an interpreter because even the number of the people fed signified the people constituted under the Law. Why were there five thousand if not because they were under the Law, the Law which were developed in the five books of Moses? What remains, then, but the realities very mysterious to understand, that the multitude cannot comprehend, they trust those who are equipped also to teach it to others, as were the apostles? That is why they filled up twelve baskets. This was marvelously done being such a great event and was very useful because it was also a spiritual event (Io. eu. Tr. 23, 3,5,6).

“Well then, why did he go up as soon as he knew that they wanted to abduct him and make him king? But why? Was he not a king who feared to made king? Absolutely, he was a king. But not a king whom men would make as such, but a king who would give the kingdom to men. Is it perhaps that also here Jesus indicates something to us, whose deeds are words? Thus, in the event that they wanted to abduct him and make him king, and for which he fled to the mountain alone, this an event in him, is silent, says nothing, means nothing? Or perhaps, to abduct him was wanting to advance the time of his kingdom? In fact, the moment to reign had not yet arrived, how can he reign in the kingdom about which we say: ‘May your kingdom come.’ In fact, he always reigns with the Father as Son of God, the Word of God, the Word through whom all things were made. (…) And yet, the disciples and the crowd who believed in him supposed that he had come already to reign. Wanting to abduct him and make him king is wanting to advance his time that he himself was hiding together with his person, in order to opportunely put it in view, and opportunely manifest it at the end of the world” (Io. eu. tr. 25, 2).

With the text, let us now pray from the depths of our heart. I suggest the following phrases and questions that can awaken in you dialogue with God, and at the same time can give rise to affections and sentiments in your dialogue with God. Go not move to the next phrase or question if you can still continue dialoguing with God in one of them. It is not a matter of exhausting the list, but of helping you to pray with some points that better fit your personal experience.

b. Contemplate and imagine that you are the young man who present to Christ the five barley loaves and the two fish. Contemplate how you approach Christ and offer him what you have. Contemplate what you offer him and offer it from the heart. Pay attention to you affections and your interior emotions.

Think of everything that you can share with those around you about the experience you had with God, especially as regards the multiplication of the loaves, the generosity of Christ, and what you can offer to God. The following points can help you share with your community the experience of the lectio divina on the text.

Turning towards the Lord: Lord God, Father Almighty, with  pure heart, as far as our littleness permits, allow us to give you our most devoted and sincere thanks, begging with all our strength from your particular goodness, that you deign to hear our petitions according to your goodwill, that by your power you may drive away the enemy from all our thoughts and actions, that you increase our faith, govern our mind and give us spiritual thoughts and bring us to your happiness, through your Son Jesus Christ, our Lord, who with you lives and reigns in the unity of the Holy Spirit, God, forever and ever. Amen (en. Ps. 150:8).

“ Greater miracle it is to govern the whole world than to satisfy a thousand men with five loaves” (Io. eu. tr. 24, 1).