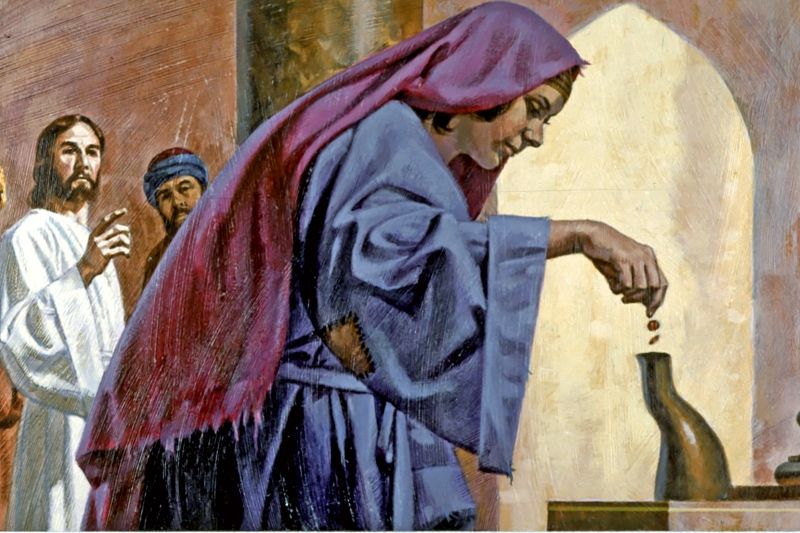 Come, Holy Spirit, by whom every devout soul, who believes in Christ, is sanctified to become a citizen of the City of God! (en. Ps. 45:8) Come, Holy Spirit, grant that we receive the motions of God, put in us your flame, enlighten us, and raise us up to God. (s. 128, 40) Amen.

38 In the course of his teaching he said, “Beware of the scribes, who like to go around in long robes and accept greetings in the market places, 39 seats of honor in the synagogues, and places of honor at banquets. 40 They devour the houses of widows and, as a pretext, recite lengthy prayers. They will receive a very severe condemnation”

41 He sat down opposite the treasury and observed how the crowd put money into the treasury. Many rich people put in large sums. 42 A poor widow also came and put in two small coins worth a few cents. 43 Calling his disciples to himself, he said to them, “Amen, I say to you, this poor widow put in more than all the other contributors to the treasury. 44 For they have all contributed from their surplus wealth, but she, from her poverty, has contributed all she had, her whole livelihood.”+

Were the Apostles perhaps rich? They abandoned only some nets and a small boat and they followed the Lord. He abandoned much who abandons all worldly hope, like the widow who deposited two small coins of small value in the alms box of the temple. No one –said the Lord- gave more than she; even though many offered great quantity of money because they were rich, no one gave as much an offering to God as she, i.e., in the alms box of the temple. Many rich put in abundance and he watched them, but not because they were putting in much. This woman entered the temple with only two coins of small value, who bothered to at least look at her? He saw, he who does not look at the hand full, but the heart. He paid attention to her and caused that others also pay attention; calling others’ attention to her, he said that no one had given as much as she did. In fact, no one gave as much as she who reserved nothing for herself.

Thus, if you have little, you will give little; if you have more, you will give more. Now then, perhaps, for giving little because you have little, shall you have less, or shall you receive less because you gave less? If the things given are examined, some are big, others are small; some are copious, others are scarce. But if the hearts of the giver are scrutinized, frequently you will find a stingy heart in those who give much, and in those who give little a generous heart. Clearly, you pay attention at the much that one gives and not at how much he reserved for himself who gave much, nor at how much he definitively gave, nor at how much other’s goods he stole and from the stolen goods he gives to the poor, as though trying to corrupt with it the divine judge. What you acquire with your donation is that your wealth does not injure you, not that they be of advantage to you. Because even if you were poor and in your poverty you give little, it will be attributed to you as much as to the rich who gives in abundance, or perhaps even more as to that woman.

Let us think, then, that the kingdom of heaven is for sale at the price of alms. We are offered the possibility to buy a fertile and rich farm; a farm that once acquired and possessed, after death we cannot even leave to our heirs, but which we shall enjoy forever; we will never abandon it, never shall we depart from it. What a magnificent possession, that is worthwhile buying! All you need to do is ask for the price, just in case you do not have with what to pay and, even if you desire to acquire it, you may not be able to buy it. In order that you may not think that it is beyond your reach, I indicate to you its price: it costs as much as what you have. To make you happy, supposing that you are not envious, I will add some more: when God shall have granted you possession of that farm which you ought to buy, do not exclude another buyer. The patriarchs bought it, did they perhaps exclude the holy prophets from the purchase? The prophets bought it, did they perhaps prevent the apostles from buying it? The apostles bought it, and to them were added as buyers the martyrs. In the end, so many bought it and it is still for sale.

Now let us see if the rich were able to buy it but not the poor. Let us examine the most recent cases putting aside the ancient buyers. Zacchaeus bought, he was the chief publican who had acquired great wealth, giving half of it to the poor. (…) Perhaps because he bought it at great price, Peter was unable to equally buy it with his nets and boat? The price demanded of each one was what each one had. After these, the widow also bought it; she paid two cents and she bought it. Is there anything of lesser value? Yes, there is. I discover a price inferior to these two cents with which to acquire such a great possession. Listen to the salesman himself, the Lord Jesus Christ, He says: “If someone gives a glass of cold water to any of these my least brothers, amen, I say to you, he will not lose his reward.” Is there any- thing of less value than a glass of water, and cold at that so as not to buy fire wood? I do not know if in your opinion there is anything of lesser price than this. Nevertheless, there is. One does not possess what Peter had, much less what Zacchaeus had, and does not even have two cents. At the proper time, does he lack even the cold water? “Peace on earth to people of good will!” Let us no longer discuss about the variety of prices. If we understand and think according to the truth, the price of that possession is the goodwill. With it Peter bought it, with it Zacchaeus bought it, with it the widow bought it, with it he who gave a glass of cold water bought it. With it only can one buy, if there is nothing else at hand (s. 105A, 1).

With the text, let us now pray from the depth of our heart. I suggest the following phrases and questions that can awaken in you dialogue with God, and at the same time can give rise to affections and sentiments in your dialogue with God. Do not move to the next phrase or question if you can still continue dialoguing with God in one of them. It is not a matter of exhausting the list, but of helping you to pray with some points that better fit your personal experience.

a. “They seek the seats of honor in the synagogues and the first places in the banquets” (Mk. 12:38).

b. “I assure you that this poor widow has put into the alms box of the offering more than anybody else” (Mk. 12:43).

Think of everything that you can share with those around you about the experience you had with God, especially about what you offer to God like the poor widow in the Gospel. The following points can help you share with your community the experience of the lectio divina on the text.

Turning towards the Lord: Lord God, Father Almighty, with pure heart, as far as our littleness permits, allow us to give you our most devoted and sincere thanks, begging with all our strength from your particular goodness, that you deign to hear our petitions according to your goodwill, that by your power you may drive away the enemy from all our thoughts and actions, that you increase our faith, govern our mind and give us spiritual thoughts and bring us to your happiness, through your Son Jesus Christ, our Lord, who with you lives and reigns in the unity of the Holy Spirit, God, forever and ever. Amen (en. Ps. 150:8).