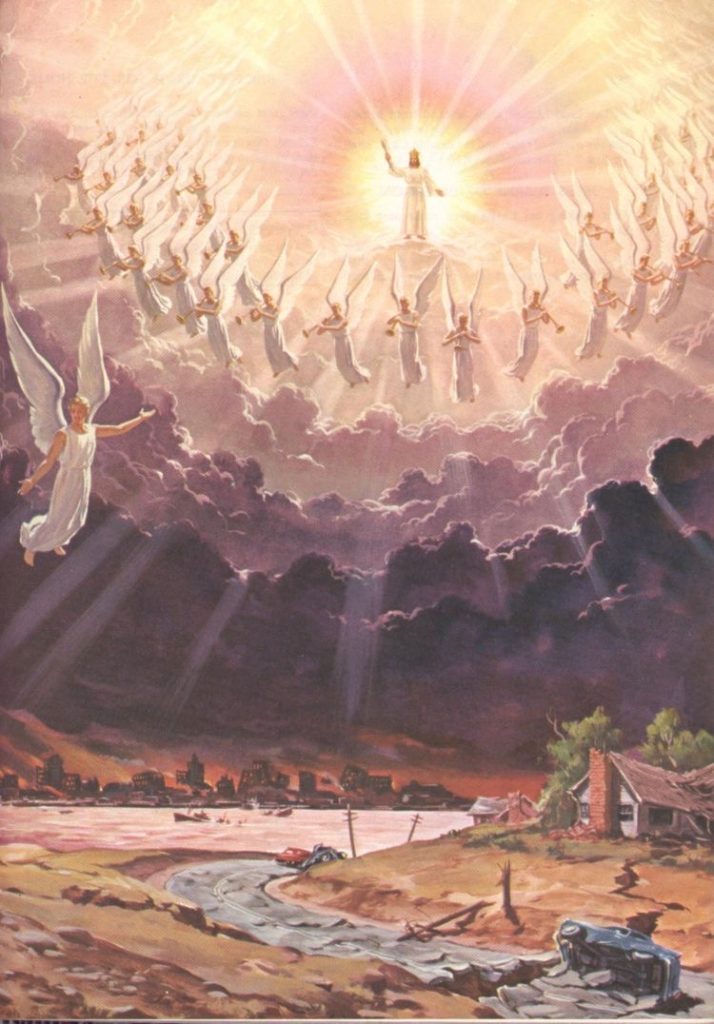 24 But in those days after the tribulation the sun will be darkened, and the moon will not give its light, 25 and the stars will be falling from the sky, and the powers in the heavens will be shaken. 26 And they will see ‘the Son of Man coming in the clouds’ with great power and glory, 27 and then he will send out the angels and gather his elect from the four winds, from the end of the earth to the end of the sky. 28 Learn a lesson from the fig tree. When its branch becomes tender and sprouts leaves, you know that summer is near. 29 In the same way, when you see these things happening , know that he is near, at the gates. 30 Amen, I say to you, this generation will not pass away until all these things have taken place. 31 Heaven and earth will pass away, but my words will not pass away. 32 But of that day or hour, no one knows, neither the angels in heaven, nor the Son, but only the Father. +

And then they will see the Son of Man come on a cloud with great power and majesty. I see that that can be understood in two senses. He can come on the Church as on a cloud, like now that he never stops coming; as it was said: Now you will see the Son of Man seated at the right hand of the Father coming on the clouds of heaven. But then he will come with great power and majesty, because his divine power and majesty will appear more in his saints for whom he increased the fortitude that they may not succumb during the great persecution. It can also be understood that he comes in his body, in which he is seated at the right hand of the Father, in which he also died, arose and ascended to heaven, as it is written in the Acts of the Apostles: having said this, a cloud received him and hid him from their eyes. And right there the angels said: You shall see him in the same way that you have seen him ascend into heaven, we have reason to believe that he will come not only in his body, but also upon a cloud; he will come as when he went, he did it on a cloud.

It is difficult to judge which of the two interpretations is preferable. The obvious meaning indicates that on saying: And then they shall see the Son of Man coming upon a cloud with great power and majesty, it is understood that he will come by himself and not by the Church, when he comes to judge the living and the dead. But we have to scrutinize the Scriptures and not content ourselves with perusing through the pages superficially. For our exercise, they are adapted in such a way that to penetrate them the more, we have to examine what follows. First it says: And then they will see the Son of Man come upon a cloud with great power and majesty. Then it continues: When that begins to happen, look and raise your head, for your redemption is at hand. And he told them this comparison: Look at the fig tree and the other trees; when they bear fruit, you know that summer is near. Thus in the same way, when you see that this is happening, know that the kingdom of God is near. On saying: When you see, to what can we refer it if not to what is mentioned before? And one of the things mentioned is: And then they will see the Son of Man coming on the cloud with great power and majesty.  Therefore, when that is seen, then the kingdom is near, but the kingdom shall not have come as yet.…

Later we shall know that it is near when we see all these things and not only some; and among them is that of seeing the Son of Man coming and sending his angels, and gathering his elect from the four corners of the world, i.e., from the whole world. All that he does at the last hour when the Lord comes or among his members as upon the clouds or in the whole Church, that is his body, as upon the cloud big and fertile that goes expanding throughout the world since when he began to preach and say: Do penance, because the kingdom of heaven is at hand. Then perhaps all these signs that the evangelists give of his coming, if they are compared and examined with greater diligence, can refer to the coming that the Lord does everyday in his Church, in his Body of which arrival he said: Now you will see the Son of Man seated at the right hand of the Father coming upon the clouds of heaven. I exclude those passages where he promises and affirms that his ultimate coming by himself is near, when he comes to judge the living and the dead, and the final part of the words of Matthew, where he evidently refers to that coming the imminence of which he was giving certain signs. Because Matthew ends thus: When the Son of Man comes in his majesty and all the angels with him, then he will sit on the throne of his majesty. Then before him all the nations will be gathered, and everything that follows until that: And these will go to eternal damnation, the just on the other hand, to eternal life. No one doubts that this whole prediction refers to the final coming of Christ and to the end of the world. There are some who, with a sensible reflection, have tried to persuade that those two groups of five virgins refer to the coming of Christ, that is right now happening in the Church. But one must abstain from daring affirmations lest other contradicting arguments be presented. One must especially bear in mind the obscurities present in the Divine Words with which God desires to exercise our intelligence not only because there are expositors sharper than others in reasonably explaining the Sacred Scriptures, but also because the same expositor understand it better some time than at other times (ep. 199, 40-45).

a. “Learn from the fig tree this parable: when its branches are already tender and leaves sprout, you know that summer is near” (Mk. 13:28).

a. Contemplate Christ coming on the clouds of heaven on the day of the final judgment. Contemplate how all the persons are convoked before his presence and how there are some who are saved and others who are condemned.

b. Contemplate and imagine that you are before Christ for your own personal judgment. Contemplate how you ask forgiveness for your faults and sins, and also how in your hands you carry your good works. Contemplate the eyes of Christ upon you and what you present to him in those moments.  Verify your feelings and your commitment to conversion.

Think of everything that you can share with those around you about the experience you had with God, especially as regards the final judgment and the fact of giving an accounting to Christ, the universal judge. The following points can help you share with your community the experience of the lectio divina on the text.

Turning towards the Lord: Lord God, Father Almighty, with pure heart, as far as our littleness permits, allow us to give you our most devoted and sincere thanks, begging with all our strength from your particular goodness, that you deign to hear our petitions according to your goodwill, that by your power you may drive away the enemy from all our thoughts and actions, that you increase our faith, govern our mind and give us spiritual thoughts and bring us to your happiness, through your Son Jesus Christ, our Lord, who with you lives and reigns in the unity of the Holy Spirit, God, forever and ever. Amen (en. Ps. 150:8).

It is interesting to take note, however, that in good consciences God is present as Father, and in the bad as Judge” (s. 12, 3).