LECTIO DIVINA: Solemnity of Christ the King, Cycle B 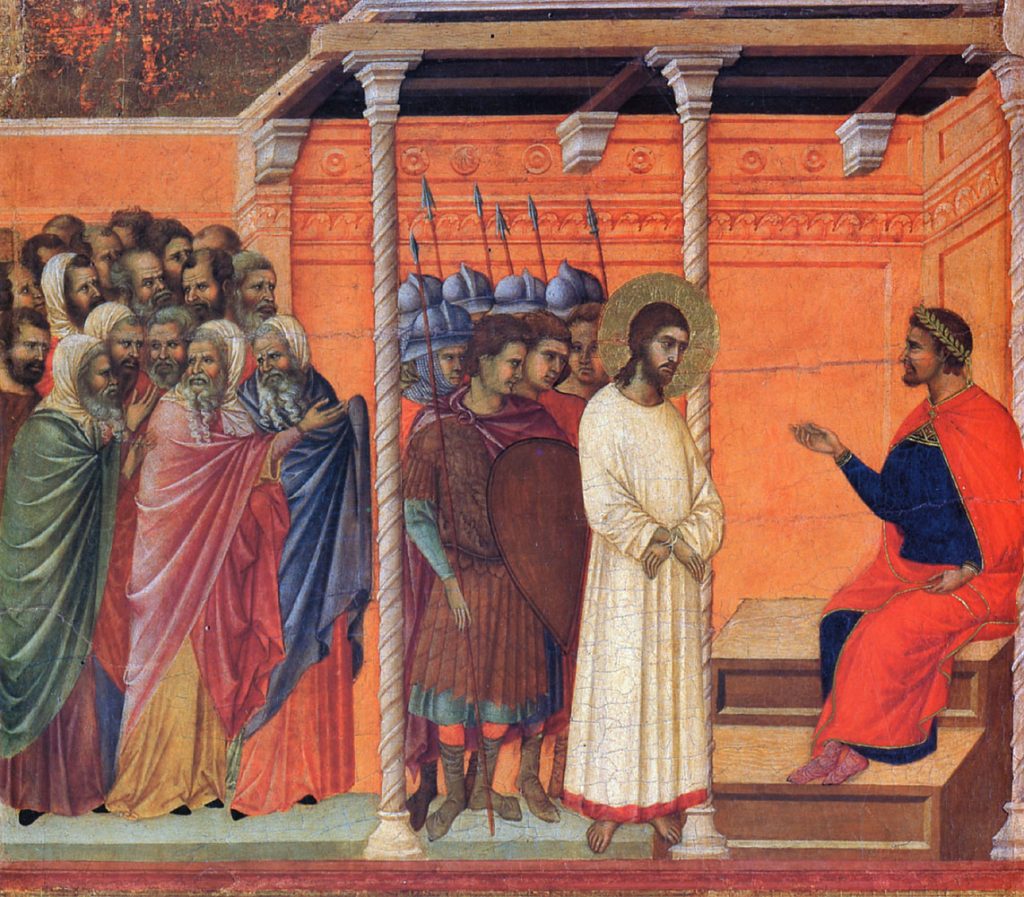 Come, Holy Spirit, by whom every devout soul, who believes in Christ, is sanctified to become a citizen of the City of God! (en. Ps.45:8) Come, Holy Spirit, grant that we receive the motions of God, put in us your flame, enlighten us and raise us up to God. (s. 128, 40)  Amen.

33 So Pilate went back into the praetorium and summoned Jesus and said to him, “Are you the king of the Jews?” 34 Jesus answered, “Do you say this on your own or have others told you about me?” 35 Pilate answered, “I am not a Jews, am I? Your own nation and  the chief priests handed you over to me. What have you done?” 36 Jesus answered, “My kingdom does not belong to this world. If my kingdom did belong to this world, my attendants would be fighting to keep me from being handed over to the Jews. But as it is my kingdom is not here.” 37 So Pilate said to him, “Then you are a king.” Jesus answered “You say I am a king. For this I was born and for this I came into the world, to testify to the truth. Everyone who belongs to the truth listens to my voice.”

Let us now meditate with the commentary of St. Augustine on these words of the Gospel of St. John the Apostle.

His kingdom, therefore, is here until the end of the world, that has mingled in its midst the darnel until the harvest, since the harvest is the end of the world. When the harvesters will come, i.e., the angels, and they will gather from his kingdom all the scandals; which evidently would not happen if his kingdom were not here. But in any case, it is not of this world but is exiled in this world; hence, he says to his kingdom: you are not of the world, but I have chosen you from the world. Thus, they were of the world when they were not his kingdom, but they belonged to the master of the world. Of the world, then, is anything of the men that though certainly created by the true God, had been born of the damaged and censured lineage of Adam; on the other hand, it is made, no longer kingdom of the world, anything coming out of it and has been regenerated in Christ. In this way, therefore, God snatched us from the power of darkness, and transferred us to the kingdom of the Son of His Love: The kingdom of which he says: My kingdom is not of this world or my kingdom is not from here.

Thus Pilate said to him: “Then you are a king?” To which Jesus answered: “You say that I am a king.” He did not fear to confess that he was king; rather, “you say” is so balanced that he neither denies to be king, since he is king whose kingdom is not of this world, nor does he confess to be king whose kingdom is supposed to be of this world. Without doubt, such was the thought of one who said: “Therefore, you are a king?” To which it is said: “You say that I am king.” Therefore, it is said: “You say” as if it were said: carnal as you are you speak carnally. Then he adds: I was born for this and I have come into the world for this, to give testimony to the truth. The syllable of this pronoun that he affirms “(for this) I was born” does not prolong itself as if it would say: “I was born in this thing” but has to be pronounced briefly as if it would say: “I was born for this thing” or “for this was I born”, as he affirms: I have come to the world for this. In fact, in the Greek Gospel nothing of this speech is ambiguous. Therefore, it is manifest that he has mentioned here his temporal birth, through which, incarnate, he came to the world, not that one without beginning, with which he was God through whom the Father has created the world. He has then said that he was born for this purpose, i.e., that he was born for this and that being born, evidently of the Virgin, he has come to the world for this: to give testimony in favor of the Truth. But since the faith is not of all, he added and affirmed: Everyone who is of the Truth listens to my voice. He listens, evidently, with the interior ears, i.e., he obeys my voice; which means the same as saying “he believes in me”. Therefore, when Christ gives testimony to the Truth, in reality he gives testimony in his own favor because he has said: “I am the Truth” and also in another place he has said: I give testimony of myself (Io. eu.tr. 115, 2-4).

a. Contemplate Christ before Pilate, the Judge of the world before a mediocre human judge. Contemplate the interrogation and how Jesus proclaims himself king, not as the world understands it, but the true king of all. Contemplate the greatness, the beauty, the power of Christ the King, including the moment of his Passion. Contemplate and love.

Think of everything that you can share with those around you about the experience you had with God, especially as regards the royalty of Christ, his power and his mercy. The following points can help you share with your community the experience of the lectio divina on the text.

Turning towards the Lord: Lord God, Father Almighty, with pure heart as far as our littleness permits, allow us to give you our most devoted and sincere thanks, begging with all our strength from your particular goodness, that you deign to hear our petitions according to your goodwill, that by your power you may drive away the enemy from all our thoughts and actions, that you increase our faith, govern our mind and give us spiritual thoughts and bring us to your happiness, through your Son, Jesus Christ, our Lord, who with you lives and reigns in the unity of the Holy Spirit, God, forever and ever. Amen (en. Ps. 150:8).          “The Son of God, who made us, dwells among us and as King he rules us, because he made us being our Creator. He who made us is the same who governs us; thence we are Christians because He is Christ” (en.