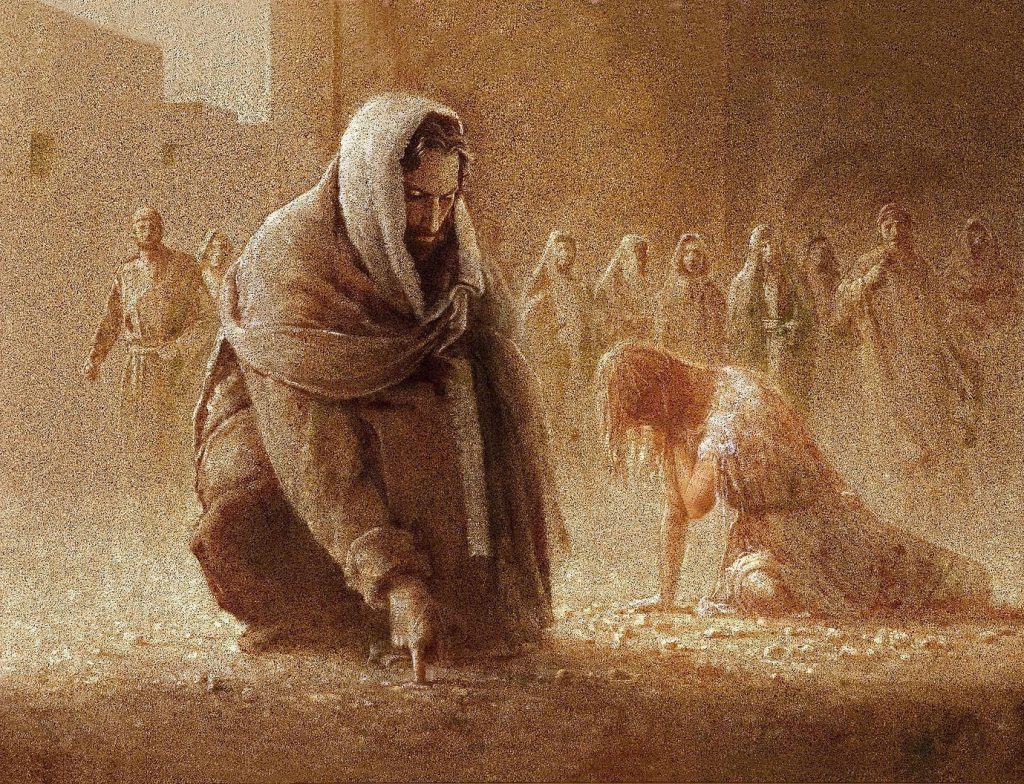 1 Jesus went to the Mount of Olives. 2 But early in the morning he arrived again in the temple area, and all the people started coming to him, and he sat down and taught them. 3 Then the scribes and the Pharisees brought a woman who had been caught in adultery and made her stand in the middle. 4 They said to him, “Teacher, this woman was caught in the very act of committing adultery. 5 Now in the law, Moses commanded us to stone such women. So what do you say?” 6 They said this to test him, so that they could have some charge to bring against him. Jesus bent down and began to write on the ground with his finger. 7 But when they continued asking him, he straightened up and said to them, “Let the one among you who is without sin be the first to throw a stone at her.” 8 Again he bent down and wrote on the ground. 9 And in response, they went away one by one, beginning with the elders. So he was left alone with the woman before him. 10 Then Jesus straightened up and said to her, “Woman, where are they? Has no one condemned you?” 11 She replied, “No one, sir.” Then Jesus said, “Neither do I condemn you. Go, and from now on do not sin any more.”+

Let us now meditate with the commentary of St. Augustine on these words of the Gospel  according to St. John.

who judges the earth not suffer an earthquake? Let us recall the passage of the Gospel: To tempt the Lord, the Pharisees brought to him a woman caught in adultery, a sin for which a punishment had been established by law, i.e., in the Law given by Moses, the servant of God. The Pharisees, therefore, approached the Lord with this tricky and deceptive dilemma: if he commanded to stone the defamed woman, he would lose his meekness; if, on the contrary, he prohibited what the Law prescribed he would be considered to have broken the Law itself. To those who asked him about paying taxes to Caesar, he caught them by their own words, asking them whose was the coin they were showing him, and whose image and inscription was on it; when his inquirers replied that it was Caesar’s, he replied at their own words: Give to Caesar what belongs to Caesar, and to God what belongs to God, to remind them that one has to give to God the image of God in man, as one gives to Caesar the image engraved on the coin. Similarly also in the case of this adulterous woman, here he asked the inquirers themselves, thus judging the judges themselves. “I do not prohibit, he says, to stone whom the Law commands to stone, but I ask by whom should she be stoned. I do not oppose the Law, but I seek who should execute it.” Finally, listen: “Do you want to stone her according to the Law?” He who is without sin, let him be the first to throw a stone at her.

While he was listening to their words, Jesus was writing on the ground with his fingers to instruct the earth; but, while he was saying this to the Pharisees, he raised his eyes, he looked at the earth and made it tremble. After having said this he started to write again on the earth. They, with remorse and fear, started to leave one after the other. Oh, what an earthquake that the earth moved so much that it changed location.

And thus when the Pharisees had left, the sinful woman and the Savior were left alone; the sick and the healer remained; misery and mercy remained. And looking at the woman he said: Has no one condemned you? No one, Lord, she answered. With all this she remained anxious. The sinners did not dare to condemn her; they did not dare stone the sinner those who, upon looking at themselves, found themselves just like her. But the woman continued in serious danger because there remained as judge he who was without sin. He said, Has no one condemned you? She answered: No one, Lord, and if neither do you, then I am secure. Seeing her anxiety, the Lord answered her with encouraging tone: Neither will I condemn you. Neither will I condemn you although I am without sin. They were impeded by their own conscience to condemn you; mercy brings me to pardon (s. 13, 4-5).

With the text, let us now pray from the depth of our heart. I suggest the following phrases and questions that can awaken in you dialogue with God, and at the same time can give rise to affections and sentiments in your dialogue with God. Do not move to the next phrase or question if you can still continue dialoguing with God in one of them. It is not a matter of exhausting the list, but of helping you to pray with some points that better fit your personal experience.

b. “Thus, when the Pharisees had gone, the sinner and the Savior remained; the sick and the healer remained; misery and mercy remained” (s. 13, 5).

b. Identify yourself with the sinner and feel in your depth the guilt of your sins, but at the same time, like the woman in the Gospel, experience the forgiveness and the infinite mercy of Christ. Experience the infinite love of Christ for all men.

Think of everything that you can share with those around you about the experience you had with God, especially about not judging others and about experiencing the infinite mercy of God. The following points can help you share with your community the experience of the lectio divina on the text.

Turning towards the Lord:  Lord God, Father Almighty, with pure heart, as far as our littleness permits, allow us to give you our most devoted and sincere thanks, begging with all our strength from your particular goodness, that you deign to hear our petitions according to your goodwill, that by your power you may drive away the enemy from all our thoughts and actions, that you increase our faith, govern our mind and give us spiritual thoughts and bring us to your happiness, through your Son Jesus Christ, our Lord, who with you lives and reigns in the unity of the Holy Spirit, God, forever and ever. Amen (en. Ps. 150:8).+