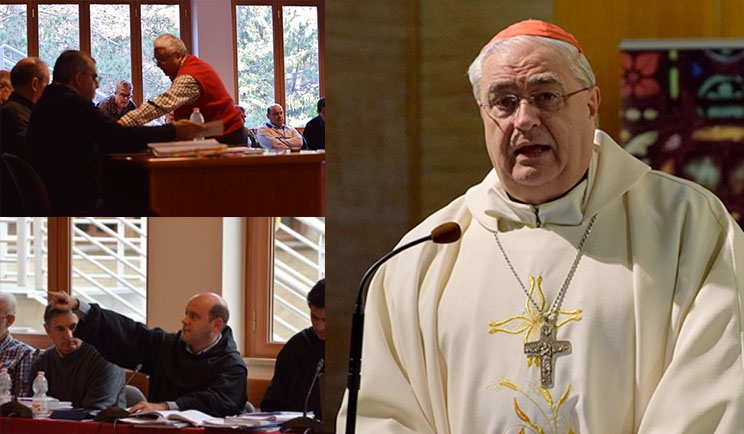 His Eminence José Luis Lacunza, an Augustinian Recollect cardinal, presided the Holy Eucharist of the 55th General Chapter on the feast day of St. Thomas of Villanova. In his homily he made mention of this archbishop of Valencia (Spain), the great reformer of his epoch, as a model of following Christ, always dynamic and seeker of unity. At this decisive moment in the life of the Order, this holy saint assumes a good reference point to pay attention to. The cardinal livened up the Order to continue being faithful to the foundational charism without losing the energy and the courage to go to the peripheries.

During the day, the cardinal also shared to the religious in Rome about the challenges that the ongoing General Chapter must confront as well as his vision about the Church of the 21st century. The Capitulars took advantage of asking him about the next World Youth Day, in 2019, which will take place in Panama. Finally, he sent greetings to all the Augustinian Recollect Family all over the world.

At the Chapter hall, it was the turn of Fray Manuel Fernandez, President of Haren-Alde and Mr. Javier Ojeda, Technical Director of Haren-Alde, to present one of the key points in the life of the Order. Their proposal was directed towards the mode of revitalizing the Order’s sensitivity for solidarity and the way by which this sensitivity can revitalize the Order. It was also a moment to be grateful for the job well done by so many people in the Order, in different places, with this solidarity-oriented cause.

What followed was a report on economy by Fray Santiago Martín Lázaro, General Econome. He made an anlysis on the sexennial performance of the Order in general, and those of the provinces in particular.

The rest of the sessions were spent to discuss issues related to the service of governance, the institutes of the Order, the publications of the Order, the importance of translations and of giving weight to the three official languages of the Order (Spanish, English, Portuguese). Also the ever-constant challenge of communications within and outside the Order came out.

After the Liturgy of the Hours in memory of Blessed Elias del Socorro Nieves, the bilingual (in Spanish and Portuguese) celebration of the holy mass followed. It was presided by Fray Carlos Ma. Dominguez, Prior Provincial of the Province of St. Thomas of Villanova.

The day’s work at the session hall began with the usual reading of the messages. Especially significant was the cordial message from His Excellency Carlos Osoro, archbishop of Madrid who has just been named cardinal.

The central theme of the day was apostolate in its very wide dimensions: missionary, ministerial, educational, etc. In the first place, there was insistence on the import of the social sensitivity of the religious and the necessity of being present among the poor and the needy, not only in a personal but also in a structural way. There was also orientation towards reinforcement on the formation of religious in the missionary spirit. “Being missionaries” is not an appendix fo the Augustinian Recollect vocation, rather it is that which gives us the true meaning of life of the religious.

Another discussion was on the management of parishes, the juridical formula of parish priest “in solidum”, giving warning on the urgency of a shared mission for which the religious are not sufficiently prepared. On the contrary, a very promising horizon opens up, because there is so much that the Augustinian Recollect spirituality can contribute to the ecclesial communion from its own charismatic experience.

In subsequent sessions, after correcting and approving the minutes, another great chapter in the list of themes on restructuring was opened, referring to ordinance 19 of the previous General Chapter. Firstly, the Prior General made a presentation of the process followed so far, what the provincial priors added to what has been realized: achievements, difficulties, etc.

The celebration of the feast of Our Lady of the Pillar and of Nossa Senhora da Conceição Aparecida (Our Lady of Aparecida, Patroness of Brazil) illumined this day from the very first hour of the morning. The holy mass was presided by Fray Fr. Jesús Nicolás Pérez-Aradros, Prior Provincial of the Province of St. Rita of Cascia.

The session hall continued to receive quite a number of messages pouring in from different communities, parishes, educational centers, cloistered communities, communities of the youth, etc.

The morning session focused on information and discussion on the restructuring of the Order. The Chapter President, Fray Miguel Miró, jump-started by making an exhortation to be docile to the action of the Spirit, manifesting availability and courage. It is the moment of taking decisions, and it requires responsible discernment starting from what has been treated so far. He also pointed out that restructuring has to be considered as means, not as end. The question that has to be made is what Order do we want and how do we want to achieve our dream. It is from here, Fray Miró concluded, from where there will arise how one should be a province of that Order being dreamed of.

The afternoon sessions saw the different groups presenting their visions of the Order which they developed and the keys of restructuring. These would be forwarded to a respective commission that, based on these, will formulate concrete proposals. Different articulations of the vision were presented and, afterwards, the different texts were subjected to a vote in order to be included in the Life and Mission Project of the Order.

The second session tackled the issue on restructuring about which discussions involved presentation of a constellation of ideas, criteria and sentiments. Without doubt, they helped enlighten the decision-making that will transpire in the following days.