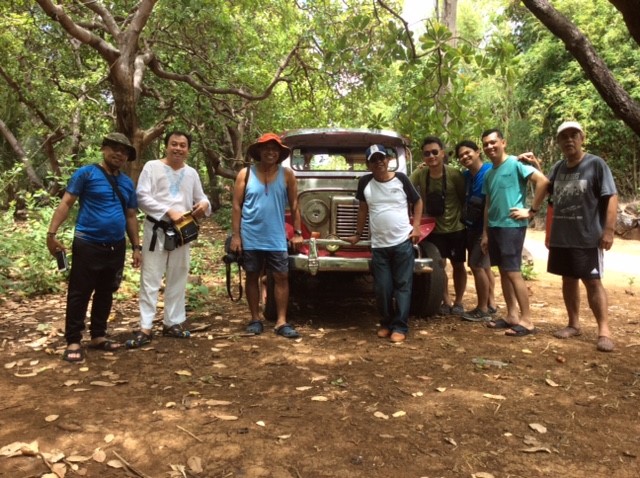 At 2 am, I was awake. The night was absolutely still, there were a few stars. Prayed the rosary from the balcony of our common room, facing, across the courtyard below, an image of the Crucified Jesus.

Four of us took an early morning dip, while Fr. Notnot was up and about with paper processes of our boat and Fr. Charlie prolonged his sleep.

The surreal scene of the beach took our breath away. The nearby islands seemed to float in the air as the perfectly still waters mirrored the clouds. The low tide had exposed wide swaths of the white sandy beach and we walked as if fearing that our heavy feet would make vanish this unearthly apparition.

Where in the world but in Cuyo can you swim in clear and clean waters in a wide white beach just beside the harbor?

The setting was perfect for Fr. Louie to give Swimming 101 to Fr. Jojo. First step, float face down. Now, flap your legs without bending the knee. Now, float face up. Now, extend your arms to move forward. It was that simple. Was it the expert teacher or the fast learner student? Anyway, the combination of both made Fr. Jojo now able to “locomote” above the water.

After breakfast, Fr. Rey, ever the gracious host, brought us to the other town, Magsaysay. He had hired one of the only two jeepneys in the whole island, a vintage vehicle in blood-red color and chrome-plating such that you thought it was recently restored.

We dropped by the parish of Saint Michael the Archangel, paid a courtesy call to the parish priest and got introduced to Monsignor Allen Aganon and a couple of pastoral council officers from Saint James parish in Alabang, Metro Manila, who had just come the day before to check on the progress of the senior high school building their group are financing as part of their outreach program. This praiseworthy cooperation of a rich parish with a faraway community in an island lost in the Palawan sea must surely be an example of the Church going out to the periphery!

The “lato” (Caulerpa lentillifera ) from Cuyo island is reputedly among the best in the Philippines. Soft but crunchy, succulent and tangy, it rolls in your tongue like sea grapes and, with a bit more imagination — and much less money — reminds you of caviar. Green caviar, it is indeed sometimes called. The fishermen and lato growers of Cebu and Bohol, reportedly, could only dream that their product had the same quality as that of Cuyo. And so, off we went to one of the seaweed farms. The morning was well advanced, the tide had risen, for which reason we were not able to see the sea product, contenting ourselves with a group selfie while standing on ancient wood planks that serve as walkway. And buying 2 kilos – all that was left – of the prized lato.

We also visited the ruins of the Magsaysay fort. An enterprising resident, reportedly a politician, has used it as a backdrop to his resort

Back in Cuyo town, we accepted deacon Jeffrey Tan’s invitation to visit his grandparents’ house to see the image of Saint Augustine that their family is safekeeping for the parish. Reverend Jeffrey is due for priestly ordination this coming June 7; thanks for the invite to the ordination, but we could not stay that long.

It is a custom in many parishes, we learned, that valuable images are loaned to selected families for safekeeping. The family also vests the image and decorates its carroza for the liturgical festivities. In a recent development, a memorandum of agreement is drawn between the parish and the family, to make sure, that through the passage of generations, both parties understood that the image is property of the parish, and not of the family.

The image of Saint Augustine kept by the Tan family is of ivory, a fine and beautiful work, and from my layman’s eyes, probably by a Filipino or at least Asian carver, judging from the almond-shaped eyes and generally Oriental features. The bushy beard, painted black, is also of ivory. The ivory hands confirm the work of a remarkable artist.

Fr. Rey also showed us a considerable collection of liturgical vessels and paraphernalia (candelabras, censers, vestments, pennants) and bells that our Recollect forebears had used to help make divine worship what it really is: man’s giving, or trying to give back, to God his numerous gifts. They are gathered in a room, not yet properly a museum, which hopefully Fr. Rey will be able to one day realize. Later, he showed us a treasure which he personally keeps in his room, handed down from the Recollects: a precious ivory image of the sleeping child Jesus, its beauty enthralling.

Again, the words of the Forma de Vivir came back, reminding us that indeed our missionaries spent the best of their fortunes in things that pertain to God and the worship due to him.

As I toured the walkways around the fort’s ramparts for picture-worthy angles, a young monitor lizard saw me coming and scurried to safety. It turned the corner, into the corridor leading to the living quarters of the convent staff, as I gave chase. The shiny floor tiles made its escape cartoonish, and it soon disappeared into a room left open. Turned out to be the room of Fr. Rey’s nephew. I informed him and he started shrieking and flailing his arms and beseeching a younger sacristan to drive the monster out. Finally, it was flushed out, and again it ran for dear life. I finally cornered it in an empty corner hall and shot it. With my iPad’s camera.

Fr. Rey said there are two bigger ones that also frequent the area.

Leaving Cuyo past one in the afternoon, we arrived in Agutaya almost three hours later. Mooring the boat was tricky, the currents endangered the propellers hitting the rocks; after disembarking, we left the crew to disentangle the stuck anchor.

The welcome party was a pleasant surprise. Fr. Joe Rey Alcantara, parish priest, and his Parish Pastoral Council officers and some choir members were at the dock, and soon were placing leis on our collars. It was enfleshing the words on the town’s entrance arch: “Maambeng ang Pagkabot!” A lavish merienda awaited us in a kiosk in the middle of the Agutaya fort: native suman, cassava puto, and the more Western cake and doughnuts. The Parish Pastoral Council was solicitously hovering over, while the choir was, by way of practicing their songs, providing background music. We felt like celebrities!

As dusk settled, we commenced the Eucharistic celebration inside Agutaya church. Fr. Louie, the only native Palaweno among us friars (and whose lolo hails from nearby Cuyo) did not need great persuasion to preside over the sacrament. Also concelebrating with us was Fr. Joe Rey. And there, in the silence of the church fortress, as evening drew near, and in the company of the handful of faithful, we commemorated the Lord’s Supper. Fr. Louie made a stirring homily, with a generous garnishing of cuyonen phrases, on the day’s gospel of how, indeed, only as branches connected to the Vine could we be fruitful. The same fidelity to the Lord that brought our missionaries, back in the 17th century, to these once-inhospitable shores, is the only guarantee to the fidelity and fruitfulness of today’s pastoral efforts.

A rich dinner of fresh seafood was served soon after mass. We insisted that the pastoral council members, the choir and the cooks join us.

The after-dinner conversation with Fr. Joe Rey was a great blessing. We saw in this earnest, dedicated, self-sacrificing and gentle-mannered young priest a pastor that Agutaya needs. Agutaya is one hundred percent Catholic. There have been attempts by ministers of other beliefs, Christian or otherwise, to establish in the island. Fr. Joe Rey talks them out of it. Agutaya’s soil is poor, vegetables are hard to come by; not even the ubiquitous cashew tree, which thrives on acidic soil, grows in Agutaya. The island does not even have a wet market; the sea, its most natural source of livelihood, can spew, in the months of the amihan, not fish but meters-high waves. You’ve got to be a committed missionary to survive in Agutaya.

Of similar commitment and dedication were, of recent memory, the last Recollect pastors of Agutaya: Fr. Jesus Sobejano (+3 July 2015) and Fr. Jose Frances (still alive and kicking in Spain, I met him May 2016 in Marcilla, Navarra). Fr. Sobejano would become later the first parish priest of our parish in Tondo, Manila, and, after that, be elected Vicar Provincial of the Vicariate of the Philippines in China. Fr. Jose Frances was assigned later to San Sebastian convent in Manila, where he was known for ministering to the street people and saying masses in various chapels in the parish. And oh, did I tell you he wrote his master’s thesis in Pilipino?

Back to Fr. Joe Rey. His limited time and resources have to be divided among the necessary formation of the people of God (through sacraments, catechesis, sacramentals, etc.) and their human development; on the other hand, he cannot but address the stone fort, some parts of which have fallen, endangering the safety of the people around. He was glad to know that, since the National Historical Institute (renamed in 2010 as the National Historical Commission of the Philippines) has put a marker in 1999, it would not be farfetched to think it could help restore the monument. Hopefully, the attention of said government entity could be given to this fort. Though not a high profile project, it is in sore need of help from cultural and heritage agencies.

The NHI marker reads: “Church of St. John the Baptist. Completed in 1748, the church fortress of St. John the Baptist of Agutaya was built by the Augustinian Recollects as defense against Muslim invasions. Named as Baluarte de San Juan Bautista, it was constructed with the help of the Agutaynons and their encomendero Don Antonio de Rojas, who delineated and laid out the building. The fortress was equipped with cannons, arquebuses, slingers and mortar weapons. During the Second World War, the church-fortress became an evacuation and refugee center for the people of Agutaya”.

Though I seem to remember that Fr. Juan de San Severo, who built the fort of Cuyo, also built those of Agutaya, Linapacan and Taytay in the late 17th century, there is no contesting the inscription on the coral stone at the front rampart that says: Se acabo en el ano 1748. (Doesn’t take away the possibility, though, that he could have started the original forts, onto which further fortifications would be added. But one needs to go back to the original documents).

Again the complete stillness of the night, when it was time to retire. And the sweltering heat in the rooms. Frs. Charlie, Notnot, Jojo and Louie soon settled in cots which they located in the pasillos outside the stuffy rooms, while Fr. Ken and I pitched our tents at the bulwark. I channeled the little boy in me, imagining pirates kept at bay by the secure fort. Fr. Ken had a more troubled sleep: he felt eyes peering inside his tent. Eyes of those who have died, missionaries, local residents, pirates within and without the ramparts of that fort.