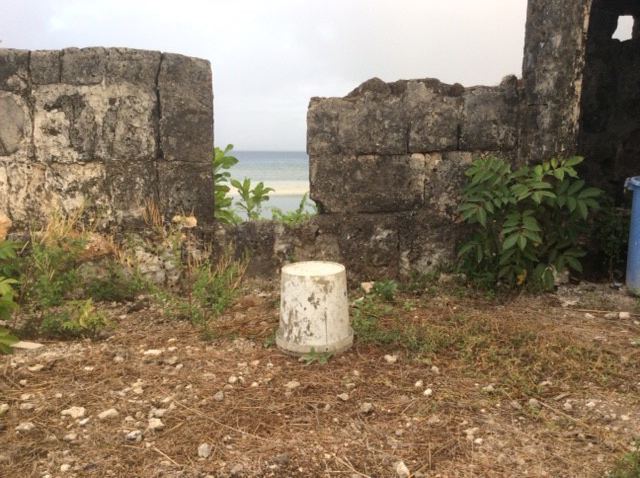 Agutaya, Linapacan, and back to Casian

Early in the morning, I went to the other bulwark, upturned a paint pail in front of a crenel and, with in view the expansive sea, prayed the morning praise and office of readings. From my iPad. God, beauty ever ancient ever new, would surely find no oddity in this mixture of the 17th and 21st centuries! Morning praise ot the “Beauty ever ancient, ever new”

After breakfast, I asked Fr. Joe Rey to show me the old books of the parish archives, hoping there would be more than the customary books of baptisms, weddings and funerals. Perhaps there would be some “Libro de Cosas Notables”? If there were, I wouldn’t hesitate to ask Fr. Joe Rey to give it for our provincial archives, since, strictly speaking, it is a book that belongs to the religious order and not to the parish as a Church jurisdiction. There was none. So, I just took pictures of two old books, of baptisms (1912-1924) and of funerals (1912). Both, with worn-out covers of calfskin, were opened by the first Prefect Apostolic of Palawan, Monsignor Victoriano Roman, in December 1912. Signing as secretary was Fr. Javier Ariz, his trusty companion, one of the few missionaries in the early years of the prefecture. At least, I was re-connecting with names I had come across continuously when writing my licentiate thesis in 1984. Opening pages of the Book of Funerals

We left for Linapacan at half past nine. It’s some 124 kms away, 290 degrees northwest of Agutaya, I learn from my seafaring co-friars. Six to seven hours of travel.

How do you keep yourself from boredom? Well, after being entertained by a generous dose of marine vistas and changing views of the Calamianes group of islands, of smelling the brine, of feeling the rare splash of the waves in the placid May waters, and of hearing the constant chug-chug of the bus-engine-turned-pumpboat-motor, you can turn your attention elsewhere. The bright-colored dry bags, of various volumes, 3 kilos, 6 kilos, 10 kilos and 20 kilos. The maritime fashion of your companions, contrasting with your simple shorts and sleeveless shirt: rash guard, amphibious shoes, army-type hat, or an authentic fishing hat, complete with a canvas to cover the face except the eyes. Or Fr. Charlie himself, a veritable fashion sight to behold: all white long loosely-sleeved linen shirt, with matching loose linen pants. Standing on the prow while scanning the horizon, he cuts a de Caprio-like-a-la-Titanic figure (minus the girl, of course); in front of an ancient fort with a mean-looking bolo hanging at his side, he’s a dead ringer for Andres Bonifacio; and, inside the church, with arms clasped in prayer, he reminds of Saint Pedro Calungsod. His gadgets, which he insists are genuine stuff and not “made in China, manufactured in Quiapo”, can also engage your curiosity for a couple of hours. Or you can sleep the time away, waking up just before lunch and preparing yourself therefor by the time-honored practice of drinking beer and munching on peanuts.

And of course, there is plenty of time to think, to reflect, to count blessings. Fr. Charlie cuts an impressive figure at the prow Fr. Ken prepares a snack of buko juice and young coconut meat for his fellow viatoares

If that’s not enough, how about participating in barter in the high seas?

About halfway through the trip, at past one in the afternoon, near Canaon and Nangalao islands, we came across a dozen or so commercial trawlers spread around an area called Solitario Rock. We approached one, captain Boning and Fr. Notnot got aboard, were seen talking to the trawler’s first officer. Will they give us fish? I inquired from Fr. Charlie. They cannot refuse, he replied, explaining that per the Philippine Fisheries Code of 1998 (RA 8550), trawlers have to fish outside of 200-nautical miles from Philippine shores, so they were, aha, in an illegal place. So, another cure for boredom is to haul inside your boat twenty kilos of bisugo, tulingan and other fish, and transfer to the eager hands of the trawler’s crew bread, four canned goods, a cluster of young coconuts and six bottles of a local brandy called Primera. Fr. Charlie said something about trawler owners usually disallowing their crew to drink, but, hey, these could well be international waters…. Barter completed, everybody happy! Hauling in a sizable amount of donated fish We docked in the San Miguel, Linapacan port a quarter before 5 pm. The parish church, dedicated to Saint Michael the Archangel, is just at the other end of the port. A wedding ceremony was just ending, and soon we were greeting the mass presiders Fr. Eugene Elivera (former rector of the diocesan seminary in Puerto Princesa) and the parish priest, Fr. Miguelito Visentino. The Linapacan fort being at another part of the island, called Kaseledan, and Fr. Notnot not remembering how to go there (his last time there was in 1989, when as a theological seminarian, he and a fellow corista were commissioned to take pictures of Recollect places of ministry both past and present for an album), we asked for a guide. We were given two, both named Adrian.

It was dark when Adrian steered the pump boat into the most beautiful cove I have ever set eyes on. Shaped like a horseshoe, it was a guaranteed refuge for vessels. At port side we could see the bright lights of a pearl farm. But the Bantay Dagat did not recognize our boat nor did the security group of the pearl farm. Eleven unknown men, some with bonnets and masks, in an unidentified boat coming in unannounced raised alarm bells among the locals. As Fr. Notnot and I were being rowed ashore in the baroto by the other Arian, a couple of Bantay Dagat promptly showed up at the pump boat and inquired from Fr. Charlie. Identity? Purpose? He assured them that, though not simple fishermen, we were fishers of men. A local boy, who had seemed to recognize Adrian’s voice, was approaching with a baroto, too. Panicky shrieks from his mother on shore made him suddenly u-turn and furiously paddle back to land, handily passing us by as his alarm grew. Wasn’t Palawan under advisory of possible Abu Sayaff incursions? Didn’t they talk of some members being seen around the area? Meanwhile, our baroto touched shore. Residents soon flocked around, though at a cautious distance. Darkness veiled what must have been their alarmed faces. A security guy from the pearl farm, with a clipboard and pen and flashlight flashed — not too blatantly, but enough to recognize our features — asked: identity? purpose of visit? As Fr. Notnot assured him, he radioed back the pearl farm. Soon, we were comfortably conversing with the village folk.

Fr. Notnot wanted to see the fort – that was what we came here for, he reminded – but I was not too determined anymore. I was also thinking of the others, who had remained in the boat, not too keen about seeing another fort, in the darkness, and one that was up a promontory and covered with vegetation. Or, we could sleep here, or in the boat, and visit the fort in the morning, Fr. Notnot suggested, still smiling.

Back in the boat, we discussed our options. Fr. Charlie wanted us to go to Kala-Kala, at the other side of the island, to see what is touted as having the clearest water (in the whole country? the region? the world?). Fr. Louie informed that he had to be back in Puerto Princesa by 7 pm of the next day, so as to catch the last trip to Narra, in time for his appointment on Saturday morning; judging from its recent track record, the boat would take several hours to get to Kala-Kala and he was not comfortable with that risk. Meanwhile, the two Adrians have to be conducted back to San Miguel, Linapacan, so they can go with Fr. Visentino, who leaves for Sibaltan island at seven the next (Friday) morning. In short, we ended up going back to spend the night in San Miguel, Linapacan. Fr. Visentino had prepared the rooms above the church for us. Frs. Ken and I preferred to sleep in our tents in the ground in front of the church.

It was certainly not a boring day.

Fr. Louie was fully dressed and was hoisting his backpack when I, having just waked up, rushed for a leak to the washroom upstairs. Fr. Ken’s tent had this marvelous mechanism that you opened and closed the whole thing like you do an automatic umbrella. Mine had the two foldable poles, and the tent itself that you have to fold into four parts, roll slowly making sure that the folded poles did not stick out too much to fit into its bag nor that air is not trapped swelling the tent. Mercifully, Fr. Visentino invited us to coffee and pandesal, so I had more than enough time.

Time for some philosophical discussion, even.

I said: What serenity, what a calm morning! But then, precisely for that, there is no air and it’s warm. Then, sighing: Well, nothing’s perfect.

Fr. Visentino: Nature is perfect! Philosophy has taught us that it is man’s thinking that perceives imperfection. But creation is perfection!

Absolutely no rejoinder to that affirmation of the highest ontological order. Another shift in perspective!

As we lazily boarded our pump boat for the last leg of the journey, we took in the sights and smells of Linapacan port. A passenger vessel had come in from Mindoro and its sewage discharge was neither eye candy nor baby-cologne scented. A rat came down from the boat into the water and started swimming to the stairs of the port!

I had the urge to make a statement of truth, to make up for that philosophical setback courtesy of Fr. Visentino. Hey, Jojo, do you remember the childhood fairy tale about the Pied Piper of Hamelin? Well, that was wrong. Rats don’t drown, as you can see. Fr. Jojo is always glad to learn something new. But I am sure, now shifting to the Gospels, that the herd of swine of at Gerasa really drowned falling from the precipice into the sea. Fr. Jojo seemed impressed I stayed within orthodox hermeneutics.

By 830 in the morning, we were negotiating around the islands just off Casian. By around 9 am, we were back in the parish convent waiting hungrily for a heavy brunch.

Viatoar I (2017) officially ended with a dip at Amianan beach at the other end of Casian, a few minutes walk from the convent.

Viatoar II (2018), barring game-changing transfers after the provincial chapter in February, is aiming for Romblon.