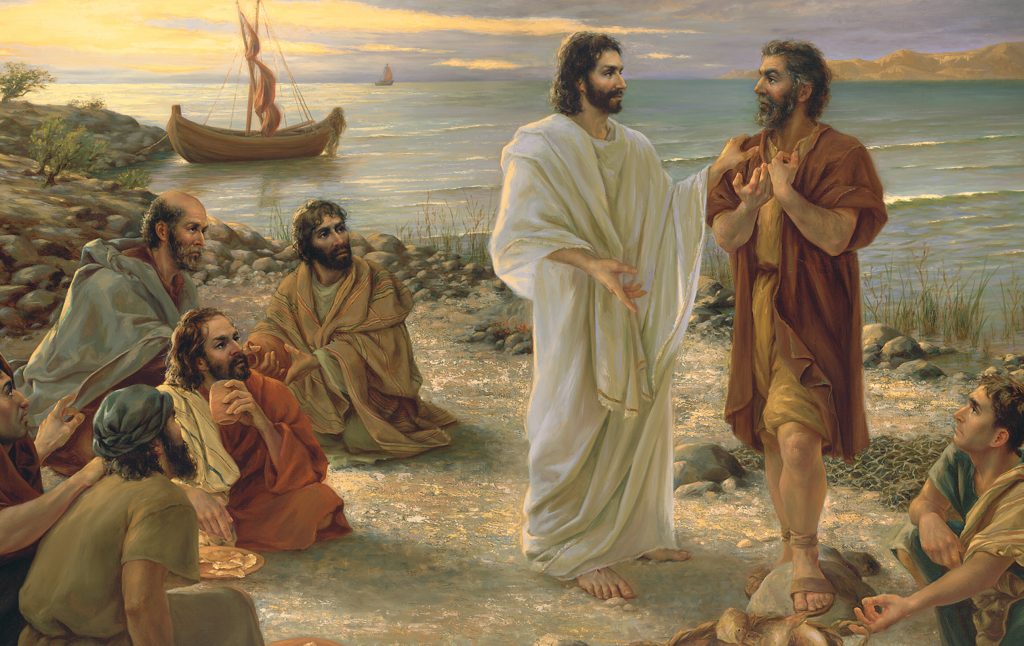 Come, Holy Spirit, by whom every devout soul, who believes in Christ, is sanctified to become a citizen of the City of God! (en. Ps 45:8) Come, Holy Spirit, grant that we receive the motions of God, put in us your flame, enlighten us and raise us up to God (s. 128, 4).

At that time, Jesus revealed himself again to his disciples at the Sea of Tiberias. He revealed himself in this way. Together were Simon Peter, Thomas called Didymus, Nathanael from Cana in Galilee, Zebedee’s sons, and two others of his disciples. Simon Peter said to them, “I am going fishing.” They said to him, we also will come with you.” So they went out and got into the boat, but that night they caught nothing. When it was already dawn, Jesus was standing on the shore; but the disciples did not realize that it was Jesus. Jesus said to them, “Children, have you caught anything to eat?” They answered him, “No.” So he said to them, “Cast the net over the right side of the boat and you will find something.” So they cast it, and were not able to pull it in because of the number of fish. So the disciple whom Jesus loved said to Peter, “It is the Lord.” When Simon Peter heard that it was the Lord, he tucked in his garment, for he was lightly clad, and jumped into the sea. The other disciples came in the boat, for they were not far from shore, only about a hundred yards, dragging the net with the fish. When they climbed out on shore, they saw a charcoal fire with fish on it and bread. Jesus said to them, “Bring some of the fish you just caught.” So Simon Peter went over and dragged the net ashore full of one hundred fifty-three large fish. Even though there were so many, the net was not torn. Jesus said to them, “Come, have breakfast.” And none of the disciples dared to ask him, “Who are you?” because they realized it was the Lord. Jesus came over and took the bread and gave it to them, and in like manner the fish. This was now the third time Jesus was revealed to his disciples after being raised from the dead.

In the great Gospel of John, this is the great mystery, and to give it very lively value, it is written in the last part. Why were there seven disciples in this fishing adventure: Peter and Thomas and Nathanael and the sons of Zebedee and two others whose names are omitted? By the number seven the end times were signified. Thus, the whole thing happens in seven days. This refers to the fact that at dawn, Jesus appears on the shore, because the shore is the end of the sea and thus signifies the end of the world. Identified with the end of the world is also the fact that Peter dragged the net to land, i.e., ashore. The Lord in person has manifested this, when in another passage about a net cast into the sea (Mt. 13:47-50), he made a comparison: And they dragged it ashore, he affirms. And to explain what the shore meant, he asserts: This will happen at the consummation of the world…. But that is a parable, through the word, not through an event. Well then, as with the event he alluded in this place to the Church as it will be at the end of the world (Jn.), so with another fishing event the Lord alludes to the Church as it is now (Mt.). On the other hand, precisely because he did this at the beginning of his public ministry and that other, instead, after the resurrection, he shows that today the good and the bad in the Church alludes to this capture of fish (in Mt.); on the other hand, this one (Jn) refers only to the good (fish) whom he will have for eternity, fulfilled in the end ‘of this era’ the resurrection from the dead. Here, instead, they cast the net at the right side and for the great number of fish they were not capable to pull it in.

What does it mean: “They were not capable of pulling it in,” but that those who belong to the resurrection of life, i.e. at the right, and who die inside the net of the name Christian, will not appear but on the shore, that is, at the end “of the world”, when they shall have resurrected? That is why they were not able to pull in the net in such a way that they scatter the fish they had caught in the boat, as happened with all those that broke the net and overloaded the boats. As regards those at the right, the Church has them in the dream of peace, as having them hidden in the depths, until the net that was being dragged from two hundred meters arrives at the shore. On the other hand, I think that there are two –one for the circumcised and another for the Gentiles- represented there thinking of the elect of one lineage and the other, the circumcised and the Gentile; one hundred and one hundred represent here the two hundred meters, because by the sum of one hundred the number passes to the right…. There are one hundred and fifty three fish, because when the number ten, the sum of the commandments, is added to the seven (gifts) of the Holy Spirit equals seventeen, a number that one gets when the numbers from one to seventeen are added sums up one hundred fifty three. Thus, 1 + 2=3 +3=6 +4=10 +5=15 +6=21 +7 = 28 +8=36 +9=45 +10=55 +11=66 +12=78 +13=91 +14=105 +15=120 +16=136 +17=153 the number of fish caught.

It is, therefore, alluded that not only one hundred fifty three saints will resurrect to eternal life, but thousands of saints who pertain to the grace of the Holy Spirit. By this grace one puts self in accord with the Law of God as against the adversary, so that, since the Holy Spirit gives life while the letter kills, with the aid of the Holy Spirit, what the letter commands may be fulfilled, and if it falls short it may be pardoned.

What is certain is that, after the catch of fish, Jesus tells them, “Come, eat.” And since they knew that it was the Lord, no one sitting around dared to ask him: “who are you?” If, therefore, they knew, what is the need to ask? If, on the other hand, it was not necessary, why is it said “no one dared”, as if it was necessary but for fear no one dared? The meaning then is this: the evidence of the truth that Jesus was appearing to these disciples was such that not one of them dared not only to deny, but even to doubt, because evidently, if someone doubted, he should have asked. They saw burning charcoal with fish on it; they also saw bread. Since the Lord commanded it, they also brought in fish from those they had caught. Even though the narrator had not expressed that they did it, nevertheless it was not omitted that the Lord commanded it, since he said: Bring some of the fish you have caught just now. And clearly, who would believe that, since he commanded it, they would not do it?

With this then, that is, with the fish they saw put on the burning charcoal, to which they added some that they had caught, and with the bread which as narrated they also saw, the Lord made a breakfast for his seven disciples. The grilled fish is Christ the Victim. This is in person the bread come down from heaven. To this is incorporated the Church to share in eternal happiness. Thus: Bring some of the fish you have caught just now, is said so that all who feel this hope may know that through the number seven of the disciples –it can be understood that through him in this place, our universality is represented-, we participate in the great mystery and we are associated to the same happiness.

But first the Lord asks not once, but again and a third time, what he knew –if Peter loves him-, and he hears also three times that Peter loves him, and three times he entrusts to him to pasture his sheep. The three confessions respond to the three denials that the tongue may serve love no less than the fear, and that it may not appear that the imminent death has drawn more words than THE LIFE who is present. Let it be the office of love to pasture the flock of the Lord, if it was indicative of fear to deny the Shepherd. Whoever for love of boasting or dominating or of enriching the self, and not for the love to obey, and help and thank God,  pasture the sheep of Christ with this intention, seeking to make them his own and not of Christ, remain convicted of loving themselves, not Christ…. (Io. eu. tr. 122, 6.7; 123,3.5).

Think of everything that you can share with those around you about the experience you had with God, especially about recognizing and loving Christ. The following points can help you as guide to share with your community the experience of the lectio divina on this text:

Turning towards the Lord: Lord God, Father Almighty, with pure heart, as far as our littleness permits, allow us to give you our most devoted and sincere thanks, begging with all our strength from you particular goodness, that by your power you may drive away the enemy from all out thoughts and actions; that you may increase our faith, govern our mind, give us spiritual thoughts, and bring us to your happiness, through your Son Jesus Christ, our Lord, who with you lives and reigns, in the unity of the Holy Spirit, God, forever and ever. Amen (en. Ps. 150:8).