Prior Provincial of Sto. Tomas on the 75th year of OAR presence in Chota, Peru 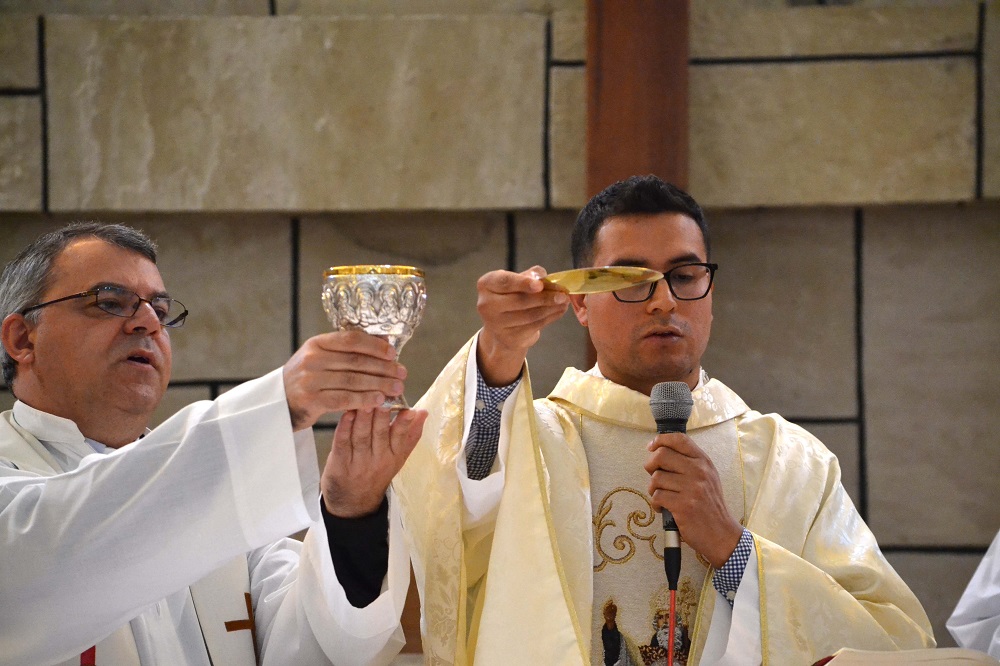 Note: This article was translated from the original Spanish article posted on the website of the Province of Sto. Tomas de Villanueva (recoletosstv.com) written by Nicolás Vigo.

Fray Miguel Ángel Hernández, Prior Provincial, sent a message of greetingsto the entire Province for the closing of the activities that celebrated the 75th anniversary of the arrival of Augustinian Recollects in Chota (Cajamarca, Peru).

As it is known, the activities to celebrate this important event for the history of the Order of Augustinian Recollects and for the Province of Chota, were inaugurated last January 7 of this year and were scheduled until September; However, the coronavirus pandemic has caused the activities to be held virtually.

The Prior Provincial of Santo Tomás de Villanueva recalled the situation in the Peruvian province 75 years ago, when the first missionaries settled in it: “The Lord, through the necessary human mediations, had the brilliant idea of ​​thinking about the Augustinian Recollects to his vineyard. The Lord knew them well and was aware of their generosity, their courage, their dedication and their availability. And there it was the religious of the Province of San Nicolás who would immediately pass the witness of the evangelization of those lands to the newly created Province of San José.

The Effort of the First Missionaries

The religious highlighted in his message the evangelizing work that the friars implemented and the effort they had to go to town, which, at that time, had no roads or means of communication: “The Recollect missionaries traveled on mules and horses to each and every corners of that mountain range. It was necessary to reach every one of the villages, no one could be left out, everyone had to receive the Proclamation of the Gospel and know from the missionaries that this town is a people loved by God.  For them neither the abysses nor the precipices of the mountains mattered, nor the stones that frequently fell off the slopes and slopes of the mountains with the risk of life for those who live along those battered roads; Nor did the cold and the rain matter, nor the scorching sun that at that altitudes close to three thousand meters burns you mercilessly.”

Likewise, it highlighted the joy with which the friars in black habit did their evangelizing work in the peasant communities: “There was so much passion, enthusiasm, dedication, fearlessness and joy that the missionaries put into the evangelizing work that the Lord trusted that faith quickly took root in that town and the abundant fruits of a job well done were not long in coming.

He also highlighted the organization that they deployed in the evangelizing work and the fruit it gave in the short and long term: “I have heard many times about the work carried out by our friars with the catechists: they were such a well-trained and organized army that they became leaders of their rural communities and trained the other members of the community; prepared the celebrations; and proclaimed and explained the Word of God. Today we speak of multipliers, but they were already present at that time our forefathers with the catechists who knew how to multiply the presence of the Church in the midst of each small town, no matter how small. The evangelizing work of our friars has deserved the recognition of many bishops of Peru who have tried to imitate and implant in their Dioceses the same method of work that was so effective for us.

Fray Miguel Ángel also refers to the vocational spring that has occurred in the Prelature of Chota and Cutervo, as a product of the religious formation that the Augustinian Recollect friars have given during these decades. On this, he said: “The vocational fruits confirm us that the friars left their mark in the mission of Chota. In the celebration of the 50 years of the Prelature, there were already more than 50 priests, among religious and diocesan priests, not counting the numerous vocations of religious sisters. Today the priests of the Prelature are scattered throughout the country, helping many other dioceses. At this moment we have twelve Augustinian Recollect religious from Chota and Cutervo, who curiously are distributed in the five areas of the Province.”

Likewise, he mentioned the work of the Augustinian Recollect bishops that the Prelature has had, who are admired for their pastoral work: “Our bishops always enjoyed the admiration of the Peruvian episcopate, being called on several occasions to occupy positions of responsibility in the Episcopal Conference and to take charge of other Dioceses of the country: Bp. Emiliano in Chachapoyas, Bp. Carmelo in Cajamarca, Bp. Fortunato in Chota and some time ago also as secretary of the Conference of Bishops.

Social work and human promotion in the province of Chota has been one of the friars’ priorities. Thanks to the Order’s help and international cooperation, much work has been done to alleviate the effects of structural poverty. On this, the superior of the Augustinian Recollects of Santo Tomás de Villanueva, said: “Social commitment has always been present in the work of integral evangelization of our friars, in few places of the Recollect geography, the presence of Haren Alde and currently the ARCORES has been so strong and decisive in the social development of a region: latrines, kitchens, bridges, roads, cooperatives and a myriad of social enterprises that do not seek but to try to make our people of Chota live with the greatest possible dignity , because what our friars have always wanted for their people is that they have life and life in abundance.”

The influence of radio

Likewise, he highlighted the evangelizing and cultural work of Santa Mónica Radio: “And a fundamental, decisive piece and I would dare to say that a determining factor in the evangelization work in the Prelature is the Santa Mónica Radio, which has just completed 27 years of existence and that in these places where communication is so complicated, where loneliness in the middle of these mountains reaches worrying dimensions, where transportation is so difficult. Santa Mónica Radio is an instrument of formation at the service of life and evangelization. It is an avenue for the evangelization and denunciation, it is a pleasant companion for those who feel alone, it is the church entering through its waves in each home and in every heart and bringing current news, Christian formation, entertainment, prayer, etc. to all listeners. We are very proud of the courage of those first friars who knew how to pick up the witness that the Church entrusted us to seek new methods and new forms of evangelization, new ways of reaching people to carry the message of the Gospel and embarked on this passionate adventure of advertising on the radio.”

The Augustinian Recollect missionaries, in the last decades, when Chota already had the necessary indigenous clergy, were handing over the parishes and leaving their administration to the diocesan priests. This historical fact was also collected by the prior provincial: “And after having handed over all the parishes of the Prelature to the bishop and the diocesan clergy, the friars decided to leave the last bastion, the parish of the cathedral and go to the peripheries of Chota, where today the parish of Santa Mónica and the social center of ARCORES stand.”

And, finally, he thanked God for these 75 years of evangelization and mutual enrichment, for evangelizers and the evangelized : “This jubilee is a thanksgiving to God for this history so full and filled with blessings and in which for 75 years our friars have been evangelized by the small and poor people of these Peruvian lands,” he concluded.