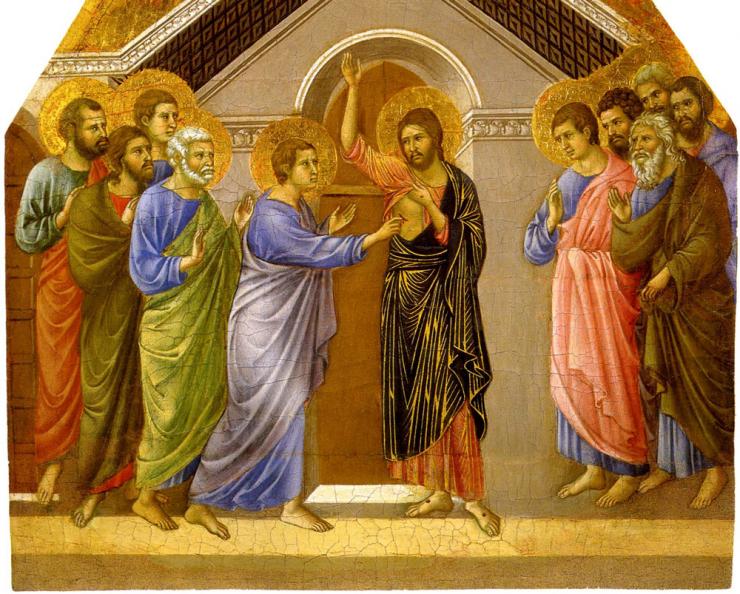 On the evening of that first day of the week, when the doors were locked,

where the disciples were, for fear of the Jews, Jesus came and stood in their midst and said to them, :Peace be with you.” When he had said this, he showed them his hands and his side. The disciples rejoiced when they saw the Lord. Jesus said to them again, “Peace be with you. As the Father has sent me, so I send you.” And when he had said this, he breathed on them and said to them, “Receive the Holy Spirit. Whose sins you forgive are forgiven them, and whose sins you retain are retained.” Thomas, called Didymus one of the Twelve, was not with them when Jesus came. So the other disciples said to him, “We have seen the Lord.” But he said to them, “Unless I see the mark of the nails in his hand and put my finger into the nailmarks and put my hand into his side, I will not believe.” Now a week later his disciples were again inside and Thomas was with them. Jesus came, although the doors were locked, and stood in their midst and said, “Peace be with you.” Then he said to Thomas, “Put your finger here and see my hands, and bring your hand and put it into my side, and do not be unbelieving, but believe.” Thomas answered and said to him, “My Lord and my God!” Jesus said to him, “Have you come to believe because you have seen me? Blessed are those who have not seen and have believed.” Now Jesus did many other signs in the presence of his disciples that are not written in this book. But these are written that you may come to believe that Jesus is the Messiah, the Son of God, and that through this belief you may have life in his name.

LET US MEDITATE NOW WITH THE COMMENTARY OF ST. AUGUSTINE ON THESE WORDS OF THE GOSPEL ACCORDING TO ST. JOHN.

On the power to forgive sins, St. Augustine comments:

“Among them only Peter has merited to personify the whole Church almost anywhere. In attention to
that personification of the whole Church that only he was representing, he merited to hear: I give to you the
keys of the kingdom of heaven. These keys were not received by only one man, but the unity of the Church
(…) That you may see that it is the Church that received the keys of the Kingdom of Heaven, listen to what the
Lord in another place says to all the Apostles: Receive the Holy Spirit. And in continuation he says: Whose sins you forgive are forgiven them and whose sins you retain they are retained. This refers to the power of the keys, of which it was said: Whatever you bind on earth shall be bound in heaven; and whatever you loose on earth shall be loosed in heaven. But before, it was said only to Peter (…) The dove binds, the dove looses. The building standing on the Rock binds and looses. Let the bound fear, let the loosed fear. Let the loosed fear to be bound; the bound let them pray to be loosed. Everyone is bound by the knots of his own sins. Outside of this Church nothing can be loosed (s. 295, 2).

On the Apostle St. Thomas who doubted, St. Augustine says:

“They saw the Lord in person, present in the flesh and they heard the words come out of his mouth and they announced them to us. Therefore, we also have heard but we have not seen. According to this, are we less fortunate than those who saw and heard? Well then, how come he adds: In order that you also would be in communion with us? They saw we did not and, nevertheless, we are also in communion with them, because we have faith in common with them. One of them, thus, despite seeing him did not believe and wanted to touch him in order to believe. These are his words: I will not believe unless I introduce my fingers into the wounds left by the nails and touch the nail marks. And he who always offers himself to the gaze of the angels to see, immediately offered himself to the hands of men to touch him. And that disciple touched him and exclaimed: My Lord and my God. After touching him as man, he confessed him as God. And the Lord, to console us who do not have the possibility of touching him with our hands once he is seated in heaven, but, yes, of touching him with faith, tells him: Because you have seen me you have believed; blessed those who do not see and yet believe. We are the ones described, we are the ones indicated. Let it, therefore, be a reality in us this blessedness that the Lord had predicted would come to pass. Let us firmly maintain what we do not yet see, since those who saw it announce it.

St. Augustine does not forget the “beatitude” of this passage, because we are happy those who have not seen and have believed.

“When, therefore, the Lord said to Thomas: “Come, put your hand and do not be unbelieving but believe” and as he, having touched the places of the wounds, exclaimed and said: “My Lord and my God,” he rebukes him and tells him: You have believed because you have seen. Why? except that a prophet is not honored in his our countr?. But, why among strangers this prophet is given honor? What follows? Blessed are those who have not seen and have believed. It is a prediction about us, and the Lord has deigned to fulfill in us what he praised before. Those who crucified him saw him, touched him, yet with all that few believed; we have not seen him nor touched him, we have heard, we have believed. Let it be fulfilled in us the happiness that he promised be realized in us (…) (Io. eu. tr. 16, 4).

•What importance does the sacrament of reconciliation have in your life?

•Living the paschal time is living the liberation from sin. How do you live the gift of “forgiveness of sins”?

b. “My Lord and my God!” Jesus said to him: “Because you have seen me you have believed? Blessed those who have not seen and yet believe” (Jn. 20:28).

•What does it mean that Christ is your Lord and your God? •On what is your faith in Christ based?

a. Contemplate the risen Christ in the midst of the Apostles and Thomas putting his fingers in the wounds of Christ. Contemplate and adore the divinity of Christ and experience the paschal gift of peace.

b. Contemplate how the Apostles receive the Holy Spirit to forgive sins. Thank the risen Christ for this gift and feel the paschal joy in your heart.