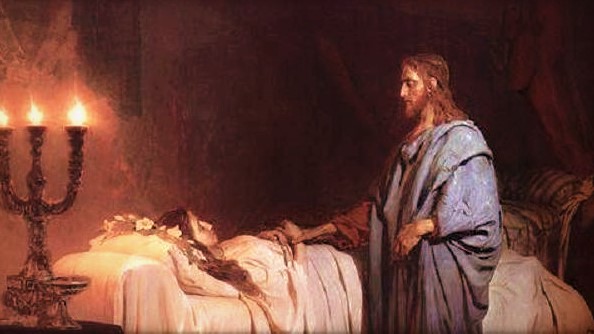 When Jesus had crossed again in the boat to the other side, a large crowd gathered around him, and he stayed close to the sea. One of the synagogue officials, named Jairus, came forward. Seeing him he fell at his feet and pleaded earnestly with him, saying, “My daughter is at the point of death, Please, come lay your hands on her that she may get well and live.” He went off with him, and a large crowd followed him and pressed upon him. There was a woman afflicted with hemorrhages for twelve years. She had suffered greatly at the hands of many doctors and had spent all that she had. Yet she was not helped but only grew worse. She had heard about Jesus and came up behind him in the crowd and touched his cloak. She said, “If I but touch his clothes, I shall be cured.” Immediately her flow of blood dried up. She felt in her body that she was healed of her affliction. Jesus, aware at once that power had gone out from him, turned around in the crowd and asked, “Who has touched my clothes?” But his disciples said to him, “You see how the crowd is pressing upon you, and yet you ask, “Who touched me?” And he looked around to see who had done it. The woman, realizing what had happened to her, approached in fear and trembling. She fell down before Jesus and told him the whole truth. He said to her, “Daughter, you faith has saved you. Go in peace. and be cured of your affliction.”

While he was still speaking, people from the synagogue official’s house arrived and said, “Your daughter has died, why trouble the teacher any longer?” Disregarding the message that was reported, Jesus said to the synagogue official, “Do not be afraid; just have faith.” He did not allow anyone to accompany him except Peter, James and John, the brother of James. When they arrived at the house of the synagogue official, he caught sight of a commotion, people weeping and wailing loudly. So he went in and said to them, “Why this commotion and weeping? The child is not dead but asleep.” And they ridiculed him. Then he put them all out. He took along the child’s father and mother and those who were with him and entered the room where the child was. He took the child by the hand and said to her, “Talitha koum,” which means. “Little girl, I say to you, arise!” The girl, a child of twelve, arose immediately and walked around. At that they were utterly astounded. He gave strict orders that no one should know this and said that she should be given something to eat.

The text narrates two important events that are commented on by St. Augustine. First is the healing of a hemorrhagic woman. In this healing St. Augustine emphasizes, first the need to leave behind the carnal desires represented by the flow of blood: Thus, this woman suffered from flow of blood and is healed from physical pain, because she was losing all her strength. Similarly, the soul by pursuing carnal desires, is squandering all his energies. This woman consumed all her possessions on doctors, such is written about her. Similarly, how much had she not spent in false doctors: astrologers, casting of lots, possessed by the evil spirit, diviners in the temples, the wretched church of the gentiles, seeking the happiness, seeking to possess some powers or seeking the medicine? In fact all of them promise health, but cannot deliver it because they have nothing to give. Then they had wasted all their goods and they were not healed. She said: “I will touch the fringe of his clothes. She touched and was healed.” (s. 63A, 3).

On the other hand he emphasizes the theme of the faith, of believing. The multitude presses on Jesus, but only the hemorrhagic woman had the faith with which to touch the cloak of Jesus and will be healed, that is why St. Augustine points out that she has the faith because she touches Jesus with the heart. St. Augustine comments thus: “To touch with the heart: behold what to believe consists in. In fact, even that woman who touched the fringe of his cloak touched him with the heart, because she believed. Moreover, he felt her who touched him but he did not feel the multitude who was pressing against him. Someone has touched me –the Lord says- she touched me, she believed in me. And the disciples, not understanding what ‘someone touched me’ meant, said to him: ‘The multitude presses against you and you say: ‘who has touched me?’ Do I not know what I am saying with these words: ‘Someone has touched me?’ The multitude presses, the faith touches. (s. 229L, 2).

But above all for St. Augustine, the daughter of Synagogue Chief represents the sins of thought, those that are discussed in his own interior of the person, and that need the saving and healing action of Christ. In fact St. Augustine manifests and makes a parallel between the three personalities who are resuscitated in the Gospel and the three sins, the sin of thought, the sin of action and the one already habitual. This is the comment of St. Augustine: Christ raised up in her house a dead girl, daughter of the synagogue’s chief. She was found at home, not yet brought to the tomb. Similar to her is the man who has resolved in his heart to commit a lustful sin: he lies dead, but in his interior. On the other hand, if his members arrive at committing it, he has been brought out. But the Lord also raised up a young man whose mother was a widow, when they were already bringing the dead young man outside the city gates. Consequently I dare to say something: You resolved in your heart to commit the sin; if you refuse to carry out the action, you will be healed before committing it. Actually, if you do penance in your heart for having resolved to commit a bad act, miserable, lustful, and punishable, you have resurrected in your interior, right in the place where you lay dead. If, however, you carried it out, you were already brought out, but you have someone who says to you: Young man, I say to you: ‘rise up’. Even though you already committed it, repent; return immediately: do not arrive at the tomb. But here I also narrate of a third dead who had been brought to the tomb. He already has the weight of the habit, a mound of earth heavily weighs upon him since the lustful sins had been habitual practice in him; his habit excessively weighs upon him. Also Christ shouts: ‘Lazarus, come out.’ A man of such worse habit already stinks. No wonder Christ gave a shout in that circumstance; he did not only give a shout, but a great shout. Since the shout of Christ, even though they are dead, even though they are already buried, even though they are stinking, even those will also rise up; without doubt they will arise. Being who he is that raises them, there is no losing hope as regards any dead (s. 128, 14).

b. “Talitha kuom”, which means: “Little girl, I tell you, rise up” (Mk.5:41).
•From what situations do you need to rise?
•St. Augustine speaks of the resurrection of the Synagogue Chief’s daughter as the forgiveness of sins of thought. How are your thoughts and desires, towards where are they directed?

a. Contemplate the hemorrhagic woman approaching Jesus in the midst of the multitude , and after the healing and the encounter with Jesus.

b. Contemplate the resurrection of the daughter of the Synagogue Chief, the lack of faith in those accompanying the parents of dead child, and later contemplate Christ bearing the ridicule and the incredulity so he can raise up the girl. Verify your own emotions and contemplate Christ as the only Savior.

“What then is to touch but to believe? We touch Christ with our faith, and it is preferable not to touch him with the hands but yes with faith, rather than to touch with the hands and without faith” (s. 246, 4).