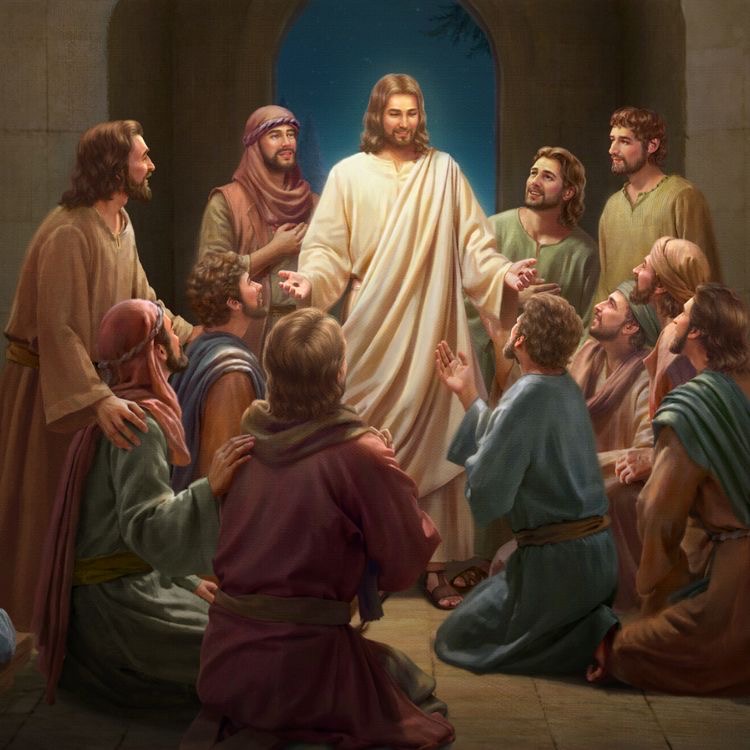 Come, Holy Spirit, by whom every devout soul, who believes in Christ, is sanctified to become a citizen of the City of God! (en. Ps. 45:8) Come, Holy Spirit, grant that we receive the motions of God, put in us your flame, enlighten us and raise us up to God (s. 128,4).

On the evening of that first day of the week, when the doors were locked, where the disciples were, for fear of the Jews, Jesus came and stood in their midst and said to them, “Peace be with you.” When he had said this, he showed them his hands and his side. The disciples rejoiced when they saw the Lord. Jesus said to them again, “Peace be with you. As the Father has sent me, so I send you.” And when he had said this, he breathed on them and said to them, “Receive the Holy Spirit. Whose sins you forgive are forgiven them, and whose sins you retain are retained.”

Thomas called Didymus, one of the Twelve, was not with them when Jesus came. So the other disciples said to him, “We have seen the Lord.” But he said to them, “Unless I see the mark of the nails in his hands and put my finger into the nailmarks, and put my hand into his side, I will not believe.”

Now a week later his disciples were again inside and Thomas was with them. Jesus came although the doors were locked, and stood in their midst and said, “Peace be with you.” Then he said to Thomas, put your finger here and see my hands and bring your hand and put it into side, and do not be unbelieving but believe.” Thomas answered and said to him, “My Lord and my God!” Jesus said to him, “Have you come to believe because you have seen me? Blessed are those who have not seen and have believed.”

Now Jesus did many other signs in the presence of his disciples that are not written in this book. But these are written that you may come to believe that Jesus is the Christ, the Son of God, and that through this belief you may have life in his name.

Let us now meditate with the commentary of St. Augustine on these words of the Gospel according to S. John.

On the power to forgive sins St. Augustine comments: “Among all of them St. Peter alone merited to personify the whole Church almost everywhere. In attention to that personification of the whole Church that only he represented, he merited to hear: I will give to you the keys of the kingdom of heaven. Not only one man received these keys, but the unity of the Church…. That you may see that it is the Church that received the keys of the kingdom of heaven, listen to what the Lord says in another occasion to all the apostles: Receive the Holy Spirit. And he continues: Whose sins you forgive, they will be forgiven them, and whose sins you retain will be retained. This refers to the power of the keys, of which it was said: Whatever you loose on earth shall be loosed in heaven, and whatever you bind on earth shall be bound in heaven. But before this was said only to Peter…. ‘The dove binds, the dove loosens.’ The building on rock binds and loosens. The bound let them fear, the loosened let them fear. Let the unbound fear to be bound; the bound let them pray to be unbound. Everyone is bound by the cords of his own sins. Outside of the Church nothing can be unbound (s. 295,2).

They saw the Lord in person present in the flesh and they heard the words from his mouth and they announced these to us. We also have heard but we did not see. Because of this, are we less fortunate than those who saw and heard? If so, how can he add: So that you also may have communion with us? They saw but we did not, nevertheless, we are in communion with them, because we have the faith in common with them. One of them despite having seen him did not believe and wanted to touch him to believe. These are his words: I will not believe unless I put my fingers in the wounds made by the nails and touch his scars. And he who always offers himself to the gaze of the Angels that they may see him, immediately offered his hands to the men to touch him. And that disciple who touched, exclaimed: My Lord and my God. After touching him as man, he confessed him as God. And the Lord, to console us who do not have the possibility to touch him with our hands once he is seated in heaven, but yes, we can touch him by faith, says to him: Because you have seen me you believe; blessed are those who have not seen but believe. We are the ones being described, we are the ones indicated. Let the blessedness that the Lord prophesied had to come be made a reality in us. Let us firmly maintain what we do not yet see, because those who saw announce it to us.

That you too may have communion with us. What greatness is there in having communion with men? Do not despise it; consider what he says next: And our communion is with God the Father and with Jesus Christ his Son. And he says: And we write you this, so that your joy may be full. He affirms that the full joy is in the communion itself, in charity itself, in unity itself (ep. Io. tr. 1, 3).

St. Augustine does not forget the “blessedness” of this passage, because we who have not seen have believed:

When, therefore, the Lord said to Thomas: Come, put in your hand and do not be faithless, but believe,” and how he, having touched the places of the wounds, exclaimed and said: “My Lord and my God,” he rebukes him and tells him: You have believed because you have seen. Why, if not because a prophet is not honored in his own country? But, because among strangers this prophet is given honor, what follows? Blessed are those who have not seen but have believed. This is a prophecy about us, the Lord was pleased to fulfill in us what he previously praised. They saw him whom they crucified, they touched him, despite all of that, few believed. We have not seen nor touched him, but we heard and believed. Let it be done to us, the joy that he promised would be fulfilled in us (Io. eu. tr. 16, 4).

Think of everything that you can share with those around you about the experience you had with God, especially concerning the forgiveness of sins and the faith in Christ. The following points can help you as guide to share with your community the experience of the lectio divina on this text.

Turning towards the Lord: Lord God, Father Almighty, with pure heart, as far as our littleness permits, allow us to give you our most devoted and sincere thanks, begging with all our strength from your particular goodness, that you deign to hear our petitions according to your good will, that by your power you may drive away the enemy from all our thoughts and actions; that you increase our faith, govern our mind, give us spiritual thoughts, and bring us to your happiness, through your Son Jesus Christ, our Lord, who with you lives and reigns, in the unity of the Holy Spirit, God, forever and ever. Amen (en. Ps. 150:8).