Day 2 gives space to look back at seeds once sown 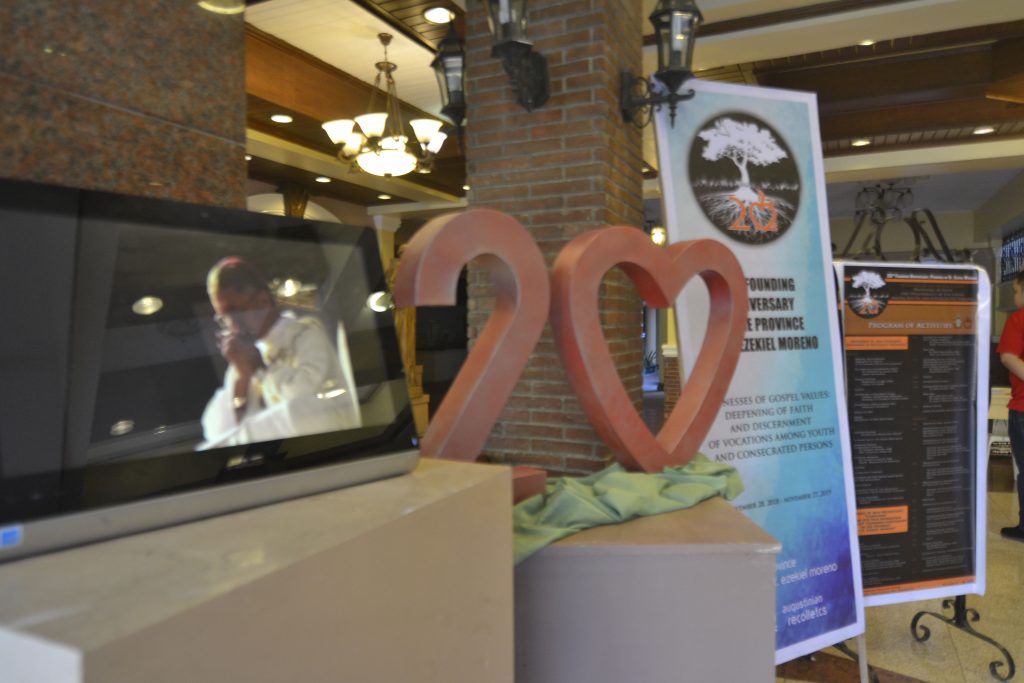 The OAR contemplative Nuns in their monastery in Bacolod, despite their physical absence at the Ground Zero of the celebrations, were very much spiritually united through their prayers and sacrifices with the rest of the family.

The morning of the second and last day was intended for talks related to history, consecrated life and ecology.

All the sessions in the morning and in the afternoon were held at the Parish Center Hall of the Our Lady of Consolation Parish in Mira-Nila.

Fray Antonio Limchaypo, OAR, Vice President for Student Welfare of San Sebastian College-Recoletos in Manila led the singing of a religious song, “New Creation,” and the prayer of invocation. Homage to the country by singing along to a pre-recoded track of the Philippine national anthem followed immediately.

Delivering the Welcome Address was Fray Ian Anthony Espartero, the Vicar of the Province, who said: “Twenty years is but a twinkling of an eye in God’s time, but it is a long time by human reckoning.” And walking on this trajectory of human time, he exhorted the brothers to rely in God’s mercy and providence so as not to be afraid of what tomorrow might bring. “God is always with us and He will be with us till the end of time,” he said.

History of the Province?

The first resource speaker, Fray Emilio Edgardo Quilatan, OAR, HED, expounded on his topic, “Deconstructing the OAR Province of St. Ezekiel Moreno: Looking back with gratitude, 1606-2018.” He presented a wider view of the history of the Province by going back to 1588, the beginnings of the Order, the Forma de Vivir and OAR Constitutions as sources of the Augustinian Recollect charism, then the missionary presence and activities in the Philippines, providing a backdrop for the birth of the Province of St. Ezekiel Moreno.

He also presented how the Province of San Nicolas de Tolentino in the Philippines grew and bore fruits from 1622, its foundation year, to 1898, which marked the end of Spanish colonization of the archipelago: 1,623 Recoletos friars served the islands; 1,249,399 souls were ministered to; 20 provinces and 203 towns were established.

In his discourse, the Recollect missionaries were depicted as promoters of nation-building. Their apostolate paved the way to the birth of what is now Congregation of the Augustinian Recollect Sisters whose foundresses, the blood sisters Dionisia and Cecilia Rossa Talangpaz, are on the road to sainthood.

He shed light a little bit on the issue of Filipinization movement that sprang up towards mid-20th century until the increase of Filipino vocations to the Recoletos became a phenomenon.

The 51st General Chapter held in 1992 with its significant clause – “if [the 1998 General Chapter] judges that it is opportune to do so [= to establish a new province]” – had preluded the elevation of the Vicariate of the Philippines and China.

By God’s design, the new Province named after St. Ezekiel Moreno was born—by unanimous vote of the 36 Capitulars of the 52nd General Chapter held in Spain—on November 28, 1998. During the transition from Vicariate to Provincehood, there were 140 friars, 122 of whom where Filipinos; the Philippines had complete cycle of seminary formation, and 15 of the Filipino Recollects were licentiate degree holders, at least.

Fray Quilatan concluded: “Today is a day of memory of the past, a day to remember those who walked before us, who also accompanied us, gave us life. Remember, remember. Memory is what makes a people strong because it feels rooted in a journey, rooted in a history, rooted in a people. Memory makes us understand that we are not alone, we are a people: a people that have history, that have a past, that have life.”

Two Rome-trained holders of a Licentiate in Church History—Fray René Paglinawan, OAR and Prof. Emmanuel Luis Romanillos—gave their reactions or offered another angle to the topic.

Fray Paglinawan affirmed the importance of basic knowledge of the Province within the history of the OAR, as illustrated by Fray Quilatan’s presentation. He further said: “Obviously, St. Ezekiel Province could not have existed without the mother Province.” To explain this, he made reference to the 20th anniversary logo: “The history of San Nicolas is like the roots and the solid trunk of the tree without which the fruits, the new Province of St. Ezekiel Moreno, would not be produced.”

Whether one can speak of the “History of the Province of St. Ezekiel Moreno,” Fray Paglinawan’s implicit answer was negative. “Strictly speaking,” he said, “an appropriate and broader length of time has to pass before an objective history of an institution could be written. Twenty years is not the appropriate length of time.”

Prof. Romanillos also stood to give what he called “The Underside of the History of the Province of St. Ezekiel Moreno during the Filipinization Phase” but only after making some clarificatory notes on some errors, including his incompletely written name.

“The gift of Provincehood,” according to this University of the Philippines professor emeritus, “was not handed to the Filipino Augustinian Recollects in the Philippines and in other countries on a silver platter.” The reason he said was that, while Provincehood was “a happy confluence of many events,” it must be noted that some of these were “enlightened, well-crafted, planned and providential” while others were “clandestine, internecine, and James Bond-like.”

But, in the end, the love and affection of God and the well-being of the Church prevailed over human frailties, he said.

After the talks, the floor was opened for the question-and-answer portion. By the great number of those who raised their questions and views, one could tell that the multifaceted topic was very engaging and relatable.

The intervention of Fray Walthrode Conde who was once tagged as among those 11 Filipino Recollects who had pushed for the Filipinization of the Recollects in the Philippines shed light on the issue: “Our petition [during the 1976 Provincial Chapter] was not separation from Spain; [rather] it was the preparation for the Filipinos to take over the schools [which were then] headed by the Spaniards. And we wanted them to prepare us because we were just new [in the school apostolate].”

Unlike in the other religious congregations with schools in the country, such as the Filipino Jesuits, they were already ready at that time. “We, Recollects, were not,” Father Conde continued. “And we asked the Province [of San Nicolas] to prepare us to take over.”

He reiterated the key point he was driving at so that historians “study the issue of Filipinization of the Catholic Education in the Philippines”: “That was not our intention to separate from Spain immediately because we knew that we were not capable of doing this. But then, they made a very wrong conclusion.”

The second topic, “Religious Life and Climate Change,” was elaborated by Fr. John Leydon of the Missionary Society of St. Columban.

Father Leydon first laid down the realities of today that present the condition of our world and its effects in ecology. The response to care for the earth has a deep connection with religious life. The vows every consecrated person professes reflect his oneness with God and the created world.

For instance: “Obedience implies listening to this inner truth in the other, in every creature and in the whole universe.”

Poverty lets us render “service to the Earth as those made poor,” and make a “commitment to an ecological lifestyle” or a “lifestyle counter to current consumerist values.”

Chastity “is a call to a more intensive relationship with creation. It is a way to reach out to the divine mystery.”

In his parting words, Fr. Leydon said: “The call to live the vows is at the heart of Creation as it is unfolding today. I wish you every blessing as you grapple with the call of God in the ‘cry of the Earth and the cry of the poor’.”

After his talk, three reactors gave their ownside of the topic. Bro. Edwin Ruiz, SAR, Sr. Maria Lirio Guillermo, AR, and Fray Amado Emmanuel Bolilia, OAR shared their thoughts to deepen the sharing of the speaker.